Rideshare drivers appreciate the scheduling flexibility the job affords them. Turns out they also wouldn’t mind a living wage, health care or a pension from the multibillion dollar corporations they work for either — not to mention a union.

“We need benefits,” said Oselig Lantigua, a 36-year-old native of the Dominican Republic who was among the dozen or so Uber and Lyft drivers gathered in front of the Taxi and Limousine Commission’s (TLC’s) offices in Long Island City, Queens on Tuesday, Sept. 27 to deliver a letter to Meera Joshi, the commission’s head, that calls on the commission to monitor union elections. “We’re not asking for anything new.”

Since February, 14,000 cabbies, mostly with the two ride sharing companies, have signed union cards with Local 1181-1061, part of the 190,000-member, transnational Amalgamated Transit Union (ATU). That’s enough to surpass 30 percent of the total workforce, a threshold required under federal law to trigger a union election. The ATU and the drivers want a meeting with the commission in order to schedule a vote.

“We’re here to say to this commission, ‘You have the absolute authority to regulate this industry: do it!’” said ATU field organizer, Chris Townsend. “They continue to allow a virtually unlimited number of new drivers to come in. They don’t do anything to keep Uber from reducing pay. There are no benefits. This commission has to accept responsibility if no one else does.”

So far, Townsend continued, “almost no lawmakers and regulators have wanted to step-up and challenge” the rideshare business model.

One might go a step further and say they are strategically avoiding regulating the industry.

Uber, Lyft and most other software-based rideshare companies classify their workers as independent contractors, sticking them with the costs of gas, tolls, and taxes while depriving them of the right unionize, receive overtime pay, or health, retirement, and unemployment benefits.

As The Indypendent reported this month, another union, the New York Taxi Workers Alliance, has filed suit against Gov. Andrew Cuomo and the state Department of Labor for failing to provide unemployment to drivers bounced from Uber’s platform. Fired drivers have been informed for months that their applications are under “executive review.” Cuomo claims have to played no role in the Labor Department’s actions, but the department is under his jurisdiction and he has described Uber as “one of these great inventions, start-ups, of this new economy.”

The alliance has also filed a complaint with the National Labor Relations Board and a class action lawsuit against Uber for misclassifying drivers as contractors.

Also in the mix: the International Association of Machinists. Uber struck a deal with the union to form an independent “drivers guild” in May, open to the 35,000 workers on the company’s platform. It remains to be seen, however, what advantage Uber drivers receive by joining the guild, which is partially funded by Uber, and the Machinists have agreed not to attempt to unionize guild members for 5 years or unless they are eventually classified as employees. 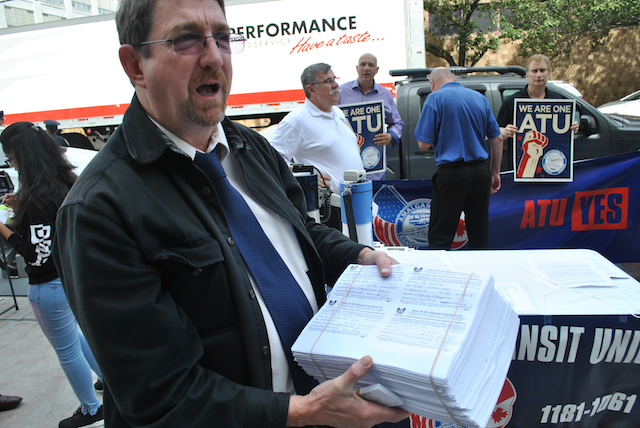 “The Machinists, we wish them well,” said ATU’s Townsend, but his union sees itself as “natural allies,” with the Taxi Workers Alliance. The ATU, which currently represents the New York City’s school bus drivers along with a portion of its transit workforce, is simply taking a different approach towards the same goal of winning drivers basic workers rights, he said.

“This is the product of thousands of hours of on the part of a few staff people, many, many volunteers and drivers working the parking lots and the various places where the drivers are, having discussions about joining the union,” Townsend added, slapping a stack of photocopied union pledges at his side. “We didn’t get this many without having a tremendous response towards what we set out to do.”

For Oselig Lantigua, the union drive isn’t just about pay and benefits. It’s also about respect and recognition for the work he and his fellow drivers perform.

“We move the community everyday,” said Lantigua. “We take the teacher to teach. We take the computer worker to his desk. When the subway is backed up and people are in a rush. We are there. We do a very important service.”