Art AIDS America
Bronx Museum of the Arts
Through October 23

The images of queer men protesting during the AIDS crisis is something many of us will never forget, yet we must also remember that people were fighting in other ways as well. The Bronx Museum of the Arts’ “Art AIDS America” features over 125 pieces of AIDS art from 1981 — the year the New York Times first reported on the disease — to 2016.

Former President Ronald Reagan’s grievous inaction is the subject of one of the exhibition’s most powerful pieces, Jonathan Horowitz’s Archival Iris Print of an Image Downloaded from the Internet with Two Copies of the New York Post Rotting in Their Frames, from 2004. It includes two framed issues of the Post published after Reagan died, above a photo of an unnamed man who has died of AIDS-related issues. The museum tells us that Reagan didn’t even devote a speech to the issue it until April 1987. A slogan on the anonymous man’s shirt provides a possible answer — “Ignorance = Fear.”  Meanwhile, Jerome Caja’s Bozo Fucks Death, a frightening 1988 painting done with nail polish, appears to be putting the blame on gay men themselves.

Considering the government’s lack of response, it is amazing that Larry Stanton felt as hopeful as he did creating one of the drawings in his 1984 series Untitled (Hospital Drawing). “I’m going to make it,” he wrote, in bold, colorful letters. In the second, Stanton, who died that same year, penned these sentences: “Life is not bad. Death is not bad. I am not afraid of dying. A little sad but not defeated.” If that doesn’t break your heart, check with your doctor to see if you still have one. 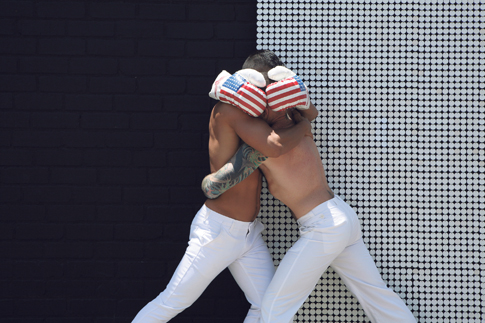 Ladz (John Arsenault and Adrian Gilliland), Eden #31; courtesy of the artists, Tacoma Art Museum and the Bronx Museum of the Arts.

The transition of AIDS from almost certain death to a manageable chronic condition is one of the great miracles of the 20th century, but that didn’t come without a price. Joey Terrill’s Still-Life with Forget-Me-Nots and One Week’s Dose of Truvada, a mixed media piece from 2012, recalls Tom Wesselmann’s Still Life series. Both showcase foods on a table. In Terrill’s work, the Truvada pills are a reminder that AIDS still exists, and that the medicine’s side effects are a possible punishment for being a sexually active gay man.

Kiki Smith’s Red Spill from 1996, red glass pieces made to represent blood, is surprisingly realistic, as is Unveiling of a Modern Chastity by Izhar Patkin, a 1981 recreation of Kaposi’s sarcoma from rubber, latex, ink and canvas.

Then there are the works that use actual bodily fluids, like Robert Sherer’s Sweet Williams, from 2013, a drawing made in HIV-positive and negative blood that symbolizes the death of beautiful gay men. Robert Blanchon’s Stains #1 & #2 is a 1994 collection of two photos that show the artist’s own stained underwear. Uncomfortable to look at, perhaps, but necessary to see. 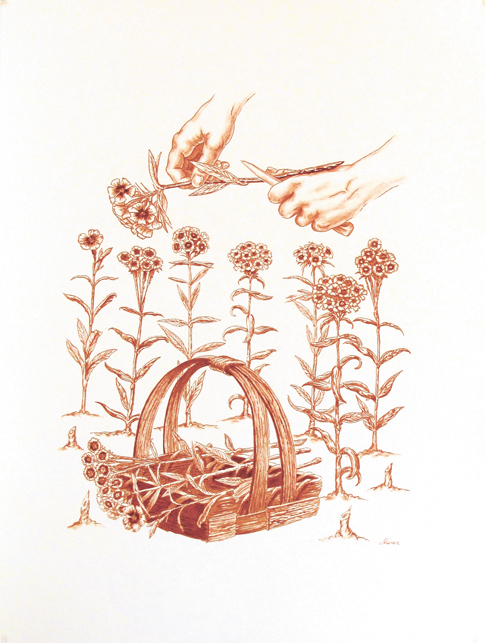 Robert Sherer, Sweet Williams; courtesy of the artist, Tacoma Art Museum and the Bronx Museum of the Arts.

“Art AIDS America” is, as its website says, “the first exhibition to examine the deep and ongoing influence of the AIDS crisis on American art and culture.” Unfortunately, that examination is far from exhaustive. Where, you might wonder, is the work of Nan Goldin, a bisexual American woman who famously photographed Cookie Mueller and Vittorio Scarpati, a writer-artist couple who died from AIDS? Where is the illustrator Antonio Lopez? The wall full of photos of women and hemophiliacs who were also affected? This is not to say the exhibition isn’t inclusive — Native Americans are represented, which is something I’ve never seen — but the curators could have done better.

The obvious way to present such an exhibition is chronologically, so the audience has a clear understanding of how the art changed as the virus progressed, but the pieces here are separated by themes of body, spirit, activism and camouflage. It’s easy to see where activism and camouflage are, but body and spirit aren’t clearly delineated. And really, doesn’t all AIDS art fall in some way under the banners of “body” and “activism?”

Some choices are just perplexing. A bunch of soda bottles strung together and covered partly by wire are all that make up Tony Feher’s Green Window, from 2001, while Felix Gonzalez-Torres’ Untitled (Water), from 1995, is nothing more than a beaded curtain. The museum speculates on how these might represent AIDS, but it feels like a reach.

Despite its weaknesses, though, “Art AIDS America” is still worth seeing — and more than once. Though it’s a relatively small exhibition, there is a whole lot to chew on.