Construction on the Dakota Access Pipeline (DAPL) near the Missouri and Cannonball rivers in North Dakota came to a halt on Sept. 9 at the behest of the departments of Justice and Interior and the U.S. Army Corps of Engineers, which announced it is reconsidering permits it granted the pipeline under the Environmental Protection Act.

The pause in construction was a victory for the Standing Rock Sioux and thousands of their supporters, most of whom are Native American, who have set up camp to blockade the pipeline along the 1,100-mile path where it is slated to carry 470,000 barrels of crude oil per day from wells in North Dakota to a river port in Illinois.

Thousands of people have joined the protest camp, known as Camp Sacred Stone, in recent weeks, including members and representatives of more than 100 tribes. It the largest and most diverse gathering of indigenous people in the United States in decades. A makeshift village has emerged with a school, dining mess, and supply depot.

Those on hand describe themselves as “protectors” not protesters. They accuse the Dakota Access Pipeline company of destroying sacred burial grounds and have raised alarms that the pipeline, should it rupture, would poison the Missouri River, a source of drinking water for the tribe and millions of others in the region.

Protectors have been met with fierce resistance from law enforcement and private security hired by the Dakota Access Pipeline company who have used dogs to attack demonstrators and sprayed them with mace. On Sept. 8, North Dakota Gov. Jack Dalrymple deployed approximately 100 members of the National Guard to back up police. Law enforcement roadblocks have been established around the Standing Rock reservation near where the camp is located.

The protectors at Sacred Stone have vowed to remain in order to guard against future attempts to resume construction and the camp continues to be a source of inspiration to environmentalists across the pipeline’s multistate path, where construction continues.

Photographer Joe Brusky and other members of the Wisconsin-based Overpass Light Brigade were invited to visit Camp Sacred Stone over Labor Day Weekend, when the size of the encampment swelled to 6,000 people. He shared these images with The Indypendent. 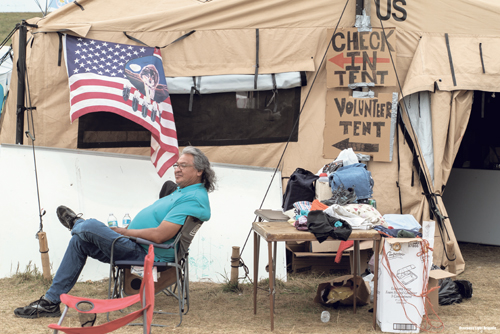 WELCOME: A man relaxes in front of a check-in tent where new arrivals are greeted at Camp Sacred Stone beside Standing Rock Reservation in North Dakota. 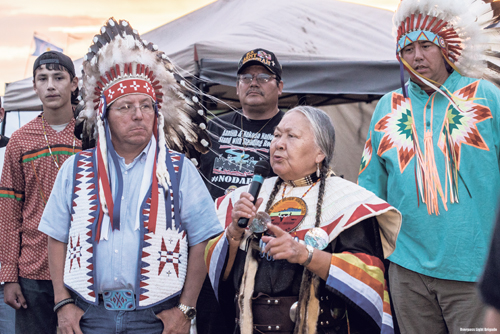 CEREMONY: During a welcome ceremony at Sacred Stone community members took the opportunity to speak, dance, drum, or greet other campers in ways that fit their tribe’s traditions and culture. Afterwards everyone shook hands and introduced themselves to new arrivals. 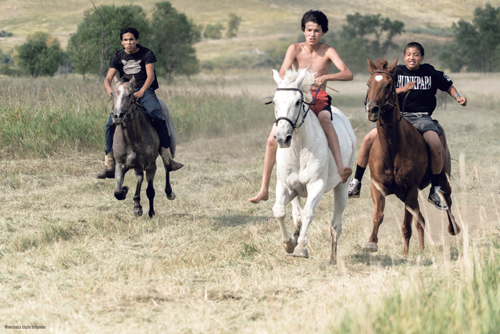 HORSE RACE: Elders at Sacred Stone have organized activities for the children to have fun while the adults square off against the Dakota Access Pipeline company. When this photo was taken private security contractors two miles away were using dogs to attack demonstrators, or protectors, as Sacred Stone residents refer to themselves. 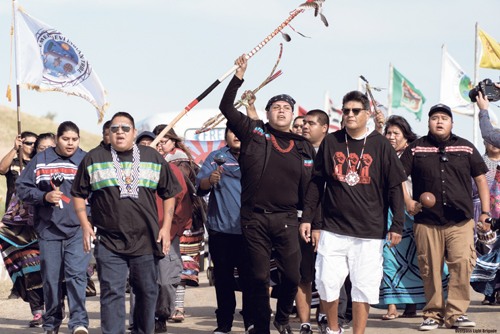 HERE WE COME: These protectors, who have taken over a road leading to a pipeline construction site, must be a formidable sight to any bulldozer driver in there way. 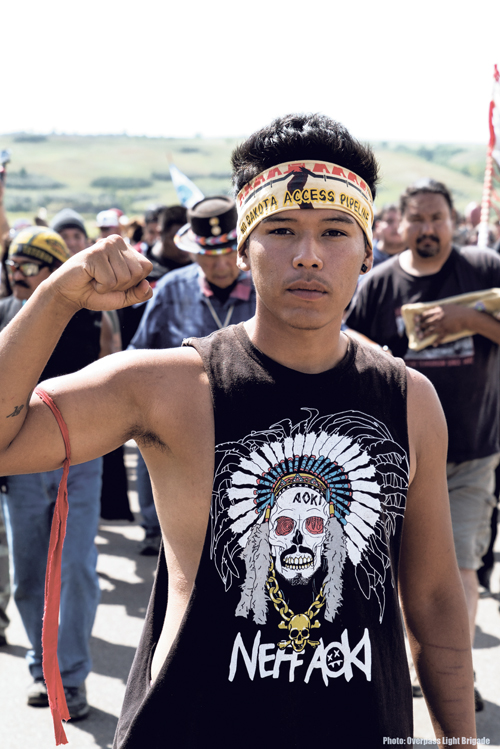 NEXT GENERATION: A young protector with his fist in the air. 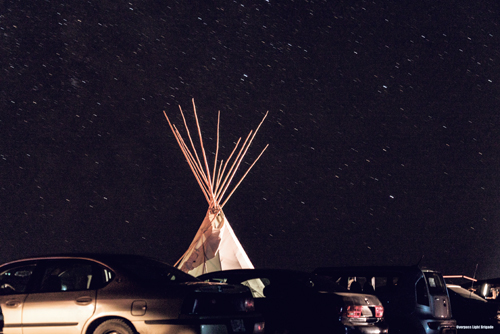 TEEPEE: An ancient abode, lit from within, rests beside an improvised parking lot. Members of the North Dakota National Guard have been assisting state troopers in maintaining roadblocks on the northern and eastern roads leading into Standing Rock, checking for outstanding warrants and restricting the flow of goods and people into the camp.