Like so many people, I am still struggling to get my political bearings in the wake of the election. I think it is very important for left organizers to enter this next period humbly, willing to rethink our assumptions and craft new ways of approaching our work. But there are a few points that are very clear to me.

We need to move through this period differently than we did during the last moment of ground-shifting rollback for the left: September 11, 2001. I was a young organizer then, part of an emergent youth movement that was working against a wave of racist ballot initiatives — eliminating affirmative action and bilingual education, denying undocumented people access to health care and public education — that expressed the white backlash as California became a majority people-of-color state.

Along with many other movements at that time, we were on an upswing, and we were starting to have real impact. Then the planes hit the Twin Towers. We got scared, rightly so. We turned inward. We convinced ourselves that having a better critique of our conditions was the key to our ability to affect those conditions. We made ourselves small in the face of the greatest political challenge of our lifetimes, and we lost our momentum.

Now, in the wake of a period where we were finally once again gaining real momentum, we are facing an even bigger challenge. This time, we need to make a different choice. We need to hold each other close and help each other mourn this painful loss over the next several weeks, but we also need to move quickly to face outward, to meet these challenges head-on. We must prepare to defend ourselves and our brothers and sisters who will face real and growing dangers: Muslims and immigrants and queer people and Black people. And we need to go big, step out of our left bubbles and actually try to speak to all poor and working-class people in this country. We need to both explicitly challenge racism and speak to the suffering of poor and working-class white people.

This is not likely to be our first impulse in the wake of an election in which 58% of white people cast ballots for the racist demagogue Donald Trump. But polls indicate that a significant section of Trump voters voted for him despite his racism, not because of it. We need to fight for those people, too, helping them to make a different meaning out of their fear and anger and suffering, and working with them to see that their real self-interest lies in opposing racism rather than investing in it or accepting it. 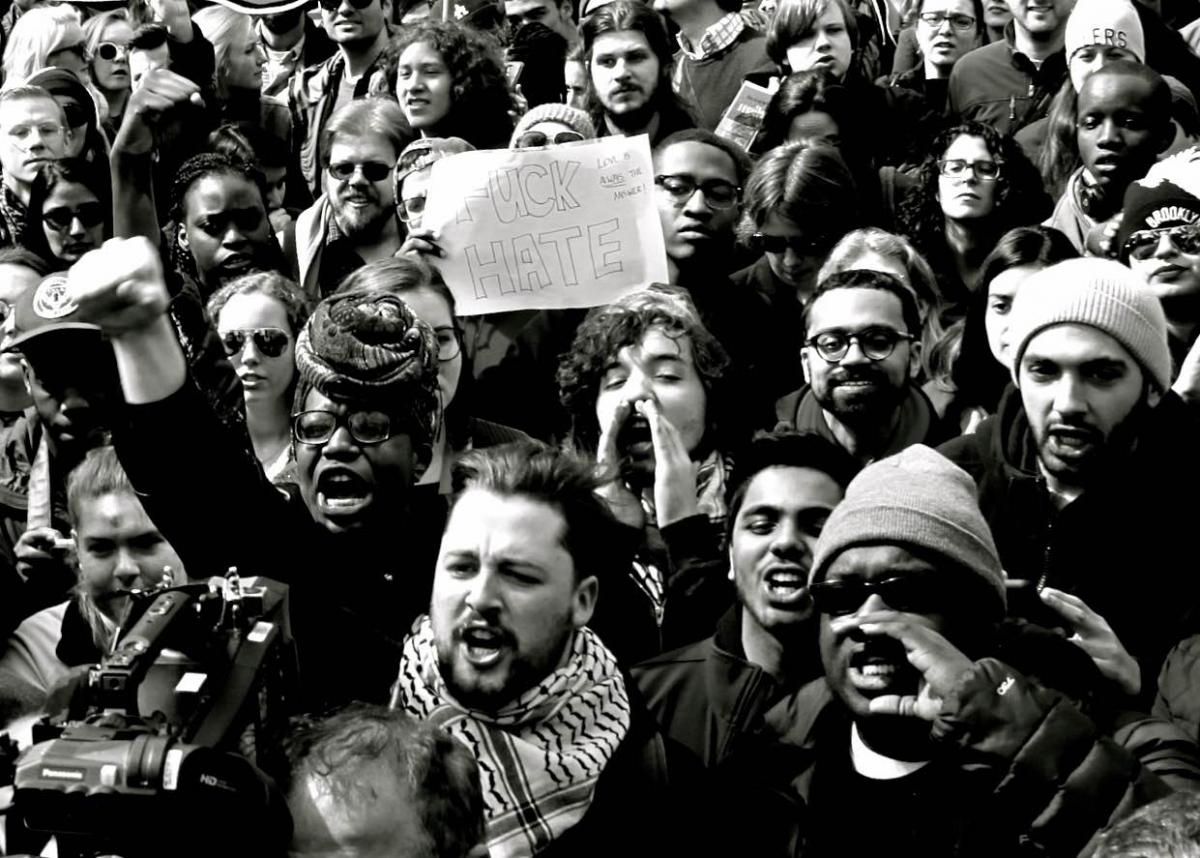 Meet you at the intersection

Though many people on the left analyze the world through a framework that looks at the intersections between different forms of oppression, in practice there has been a divide between struggles for racial and gender justice and the fight against economic inequality, to our peril. It would be easy to respond to this election by accelerating that divergence. Many organizers of color are understandably frustrated at being asked to empathize with the pain of poor white people. On the other hand, many white organizers are talking about organizing white working-class people in ways that either silence race or frame the work as only being in solidarity with communities of color, rather than showing how opposing racism is in the self-interest of poor white people. We will continue to lose — and lose big — if we don’t craft a different story about race, class, gender, and nation that can help us all to make a different meaning of our suffering.

There are some organizations around the country that are in the early days of reorienting to the fight in this more expansive, integrative, and ambitious way: People’s Action, a national federation of community organizations based in white, Black, Latino, and Native communities around the country; #AllOfUs, a new organization of millennial activists dedicated to fighting racism and Wall Street; sections of white organizers in Showing Up For Racial Justice, and more. It will take courage, humility, and a willingness to make mistakes to reorient our work to think big and to fight for everyone, but we have no other choice. If we are going to build the scale of power we need to stop Donald Trump, we are going to need a breadth of solidarity that will push us beyond all of our past experiences and many of our current boundaries.

Harmony Goldberg is a longtime political educator who works with community organizations around the country. She is based in Brooklyn.

Love and Struggle
By John Tarleton

The Mourning After: Waking Up in Trump's America
By Nicholas Powers

How We Ended Up In This Mess: Democrats Ceased to Represent Ordinary People
By Danny Katch