It's 4 o'clock in the morning. November 9. I'm lying in bed next to my partner and I can't sleep. I'm thinking of all the people in my life — black people, women, LGBTQ folks, Muslims, immigrants — who are genuinely afraid of what comes next.

I'm thinking of people whose first reaction to this terrible result was to scapegoat the dreaded third-party voter for throwing this election away. I feel sorry for them that their knee-jerk response was so wrongheaded and spiteful.

I'm thinking of the next four years and what it means for my life. My job includes writing grants to secure federal funding for criminal justice reform projects. How will President-elect Trump's racist law-and-order justice policies and inevitable budget cuts to the federal government needed to balance his outrageous tax cuts affect my work? What does this mean for my ability to pay rent, buy food, save for a small house, get married?

I'm thinking of this stupid "racism versus economic anxiety" debate — attempting to explain the underlying motivation for the Trump voter — that I already see springing up on the left. And I'm thinking of how undeniably intertwined capitalism and racism are in this country. How they mutually reinforce one another. And how we need to obliterate both.

But mostly I'm thinking of Frederick Douglass. And what he said about struggle.

It's time I start putting my money where my mouth is once again in regards to struggle, to social movements, to the fight to free humanity from the exploitation and oppression heaped upon it by capitalism, structural racism, and patriarchy. After Occupy Wall Street, I burned out. I retreated, under the guise of self-care. Mostly I was being lazy. I cannot be lazy anymore. I cannot be afraid. I must plow up the ground. 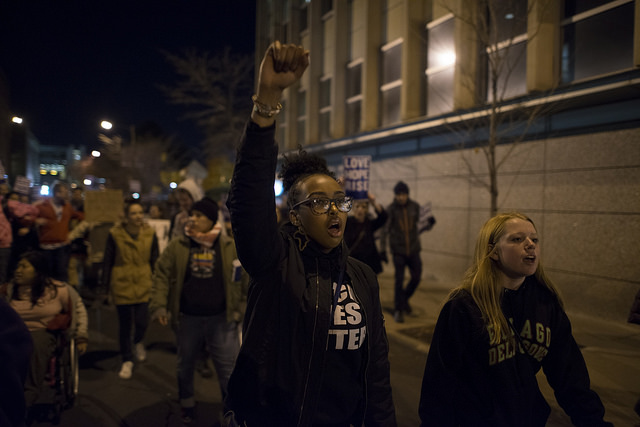 We humans were once a globs of goo, but then we started walking and talking and created fire. Those were good times, I bet. Somewhere along the way we got lost. We gave some people lots of money and power and others hardly any. We made war and sent the powerless off to fight. We made some of the powerless think that other powerless people were trying to take what little they had left. We made them hate those people.

I believe there is a better way to organize our lives that can liberate us from needless suffering at the hands of profit and hate. I believe in socialism.
And so, I'm thinking about Frederick Douglass, who must have evolved from a good glob of goo. We'll need more people who evolved from good gobs of goo in the coming days, months and years if we are to survive and thrive and grow. And by that I mean socialists, feminists, anti-racists, anarchists, progressives, communists and social democrats; people who are prepared to struggle for equality, justice, and freedom.
In a speech delivered in Canandaigua, New York three years before the Civil War, Douglass told a room full of abolitionists:

Men may not get all they pay for in this world, but they must certainly pay for all they get. If we ever get free from the oppressions and wrongs heaped upon us, we must pay for their removal. We must do this by labor, by suffering, by sacrifice, and if needs be, by our lives and the lives of others.

More than ever, his words hold true today.