Robin Laverne Wilson is a performance artist best known in New York City activist circles for the various personas she has adopted to advance a social justice message. There is Dragonfly, the piercing singer with Reverend Billy and the Church of Stop Shopping Choir, Miss Justice Jester, the irreverent, tambourine wielding clown with a large bright red wig who has enlivened many a local protest and Helvetika Bold, a superhero who confronts corrupt corporate media. These days Robin has taken on perhaps her most audacious role to date – Green Party candidate for United States Senate.

In her Senate run against Wall Street-backed three-term incumbent Chuck Schumer, she has emphasized what she calls the 3 P’s: planet, people and peace in the hopes of amplifying grassroots voices who seek as she puts it “to challenge the establishment's pattern of lethal legislation made by corporate interests and military leadership.”

She recently sat down with me at the Brooklyn Commons Café and in a wide-ranging conversation discussed her upbringing, the challenges of being a first-time political candidate and the reactions she faces as a Black woman who is never afraid to speak her mind. Here is an edited version of our conversation.

Elia Gran: What led you to accept the Green Party nomination to run as U.S. Senator for New York?

Robin Laverne Wilson: Why not? We have to push the boundaries of nonviolent resistance and civil disobedience as much as possible. Another reason was because I am currently working on my master's degree in applied theatre in CUNY. When I got offered the candidacy I was studying Augusto Boal and how he took the pedagogy of the oppressed, used it as a tool to organize and ultimately become a legislator. It was the perfect storm! Right when I’m in the middle of learning how an artist, activist revolutionary uses theatre as a tool to organize people.

At the same time I think I represent a very critical part of the American population. I am part of Generation X, I am that wedge between the two main generations that are getting all the attention and my generation is the silent forgotten one that is everybody else’s caretaker, either taking care of our parents or elders or taking care of our children, who are the millennial. There has been no respect, no attention given to us at all.

Who are people that have inspired or influenced you?

My father was a very self-educated man and I grew up in a house full of books. When I was six- years-old he said that I was too metaphysical and I should be more empirical. He made me take out a dictionary and look up the definition of those two words. That moment with my father is a memory that just rings louder and louder as I get older and especially in this moment of my life. Realizing how I have personally become a very powerful union of logic and empathy, left and right brain, empirical and metaphysical. Being able to relate to people at whatever level they are at.

I am also very inspired by Harriet Tubman. She never asked for permission to do what she did, she didn’t say sorry, she did what needed to be done. That was some of the most bad ass feminism you could ever do. She had a gun and most of the time she had to use it on the people who were afraid of freedom, I can relate to that.

In your campaign you mention that you are ‘running for our lives', what do you mean?

We are running from ecocide, the destruction of all life on the planet, from the way poor people are constantly being shaken down and stigmatized. We are running for the basics of human dignity in life; clean water, air, food, and land.

I feel that my job is to wake people up and get them to reevaluate their priorities regardless of whom they're voting for because in order to change culture we have to be that culture, we have to be willing to talk about things that are emotionally uncomfortable and spiritually uncomfortable before they become ultimately physically unbearable for all of us.

How does it feel to run as a third-party candidate?

The way that language morphs over time and becomes redefined helps explain who has got the power. It is the language that we use that perpetuates these systems. Even those of us who feel incredibly disenfranchised by the way these systems are perpetuated, our attitude and our language continues to perpetuate the status quo.

Do you consider yourself a politician?

I’m not a politician because I’m too honest and authentic. I am so used to being Dragonfly and saying exactly what’s on my mind, how I feel it, whereas in politics things have to be sugar coated a bit.

I am learning a lot about the Green Party, its potential as well as its dysfunction. Even those who consider themselves liberal and progressives have a lot of polka dots in their peripheral vision that’s going to keep us all from moving forward. So even now, I am not really an insider, still a troublemaker on the other side of the ballot.

Have you been active in your roles as Dragonfly and Miss Justice Jester during the campaign? 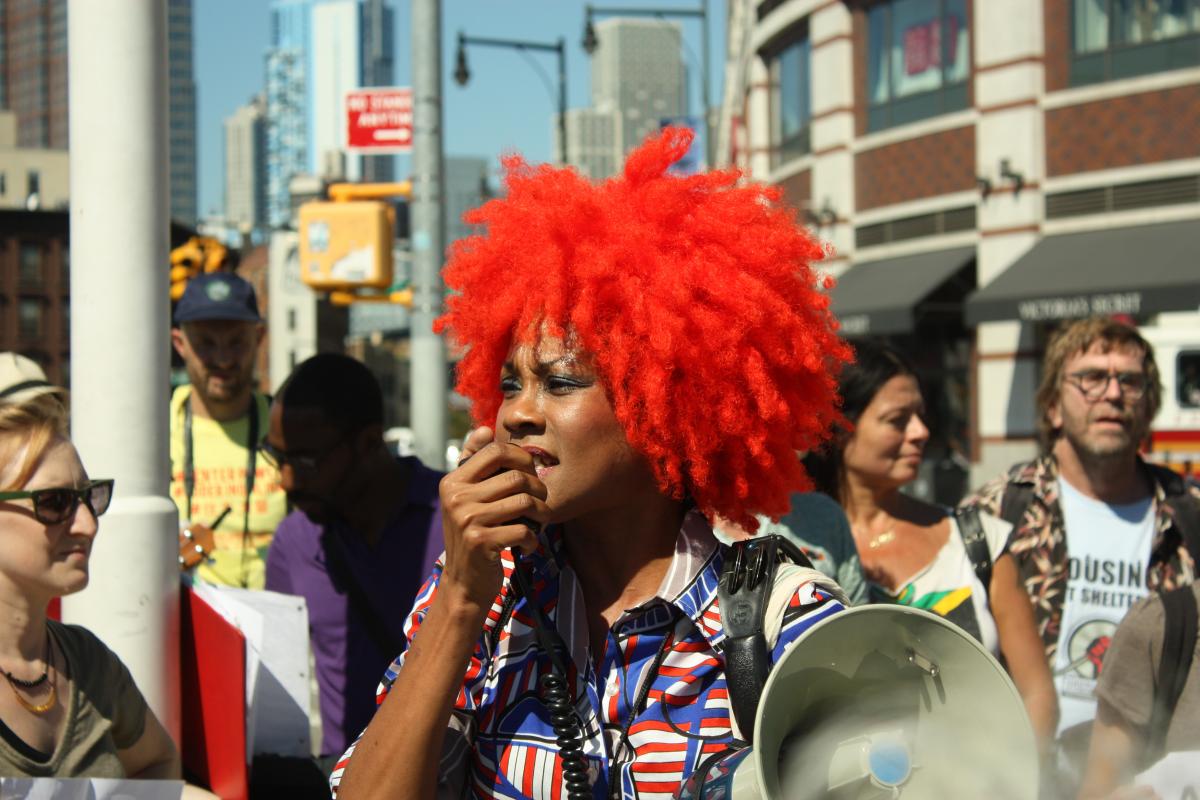 Dragonfly right now is chilling out and taking it all in, taking notes. I’m still involved with Reverend Billy and the Stop Shopping Choir. I’m still a part-time graduate student while trying to run a full-time or almost full-time political campaign and I don’t have any income from either.

So again it goes back to my role which I am still identifying and redefining. I want to use my power for good not evil, whatever that power is. My civil disobedience takes place on both sides of the ballot and I probably haven’t been disruptive enough.

Has it been hard to lead your own political campaign?

Oh yes, it's a constant uphill battle. It seems like we are either preaching to the choir, people who already know us and are onboard and get it or we are dealing with people who, even though they are frustrated with the system, are still apathetic or mistrustful of anything that is not the two-party paradigm that we have all been indoctrinated in. I feel like it is mostly the young people who are learning about me.

I don't even want to make it about me. A very interesting part of this journey is that, not believing in the cult of personality, it's still your name and image that you're putting out there and promoting and so you still have to self-promote even though I feel that it's not about me and so there is a bit of a cognitive dissonance.

What have you learned from this experience so far?

One of the things that I have learned is that the world simultaneously expects and disrespects the leadership of black women. Whatever we consider leadership. It's expected, but once you fill the space, especially when you’re clear and direct, there is almost always a push-back even though that’s what you were asked to do. You would think that after 42 years of being in this skin I wouldn’t be surprised.

The response that I get when I meet people is 98% they are overwhelmingly positive. And I think that’s because I feel that the main thing I am doing and can do right now is inspire people to think outside the box, to be unafraid, to challenge the status quo, to continue whatever work they are doing on the ground, in the grassroots, on whatever is their issue.