PALERMO, Italy–The ship is already there in the early morning when we arrive to the Port.

So are the police, the Red Cross, the health department, Doctors Without Borders, Catholic Charities, the International Organization for Migration, Save the Children, the European border patrol agency Frontex, the Italian Coast Guard and immigration authorities- in uniforms of red, blue, white or orange- milling around or walking purposefully or setting up tents.  Two friends and I approach a food tent to ask how we might be helpful.  We open some boxes and flatten others in quiet anticipation. A long line of hearses enters the Port and parks in a row.  It’s the beginning of another day in Sicily, a central Mediterranean island that has seen an influx in recent years of hundreds of thousands of African migrants who arrive hoping to continue their journeys to other destinations throughout Europe. 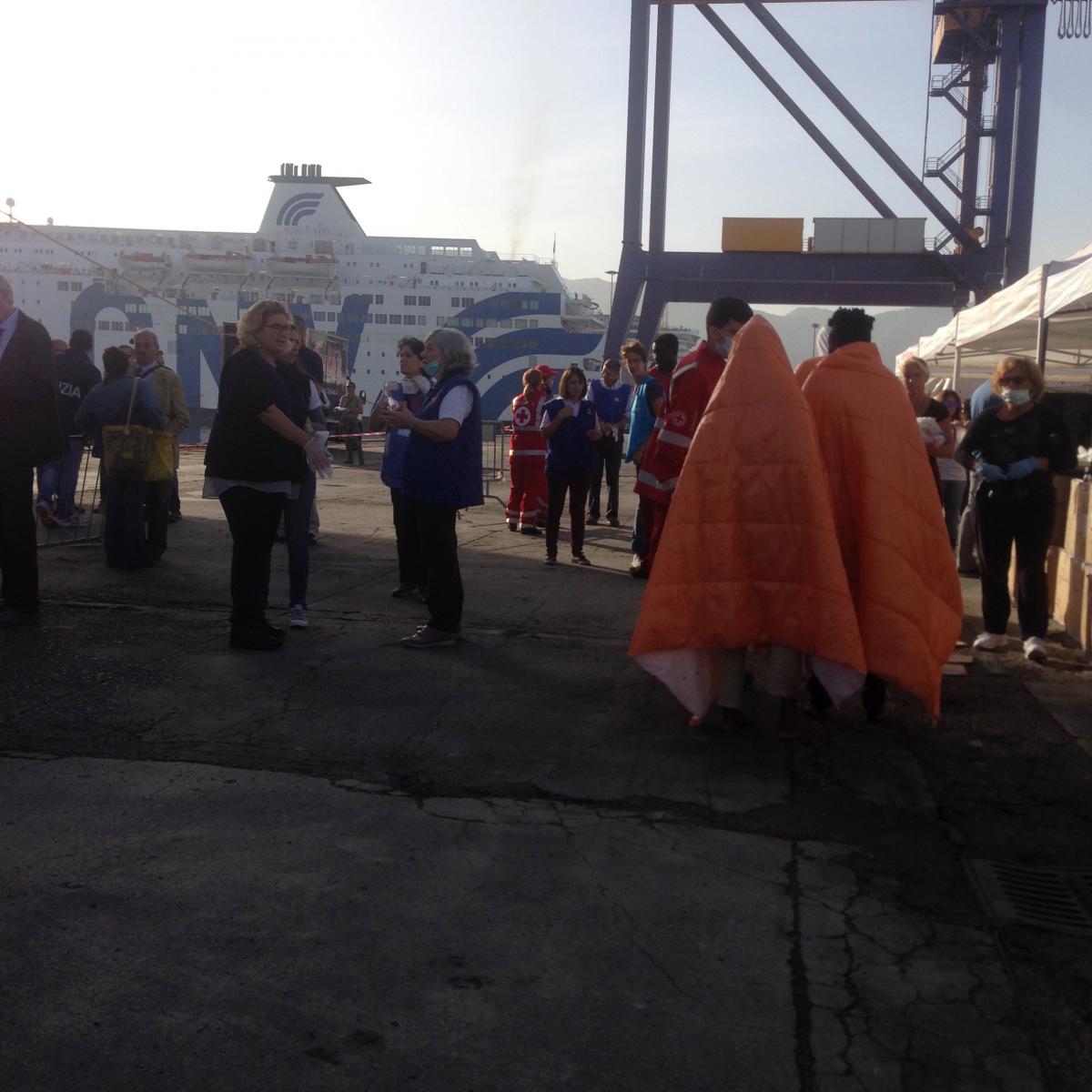 The first person to disembark comes off in a stretcher.  I think he is dead but the stretcher rolls down the line of provisions and not towards the hearses.  The next person to come off is in a wheelchair with a bright white bandage around his head.  A few more wheelchairs emerge and then a long procession of women and children with eyes that won’t look and feet that are bare.  I wonder about what had happened to their shoes, which feels easier than wondering about what may have happened to them.

The first stop on the provision line contains boxes and boxes of off-brand Crocs, then on to water and snacks and waiting.  There are so many children.

In a group of five teenage boys, two are from Burkina Faso, two from Gambia and one from Somalia.  During a lull, I sit down with them and learn their names.  One boy asks me if I’ve heard of Gambia before.  I say yes, but really it was just a word until now.

Another is wearing pants that are too big and they keep falling down.  He has no underwear and tries to conceal himself with the orange plastic covered blanket that everyone is carrying.  Some people find inventive ways to tie the blanket around them in kind of a shift.  I joke to one kid before he gets his picture taken that he looks very fashionable and he laughs.  Refugee chic.

Through registration: name, date of birth, nationality.  A hodgepodge of handwriting, languages and accents for some very basic questions and I wonder how many people lose their names this way. 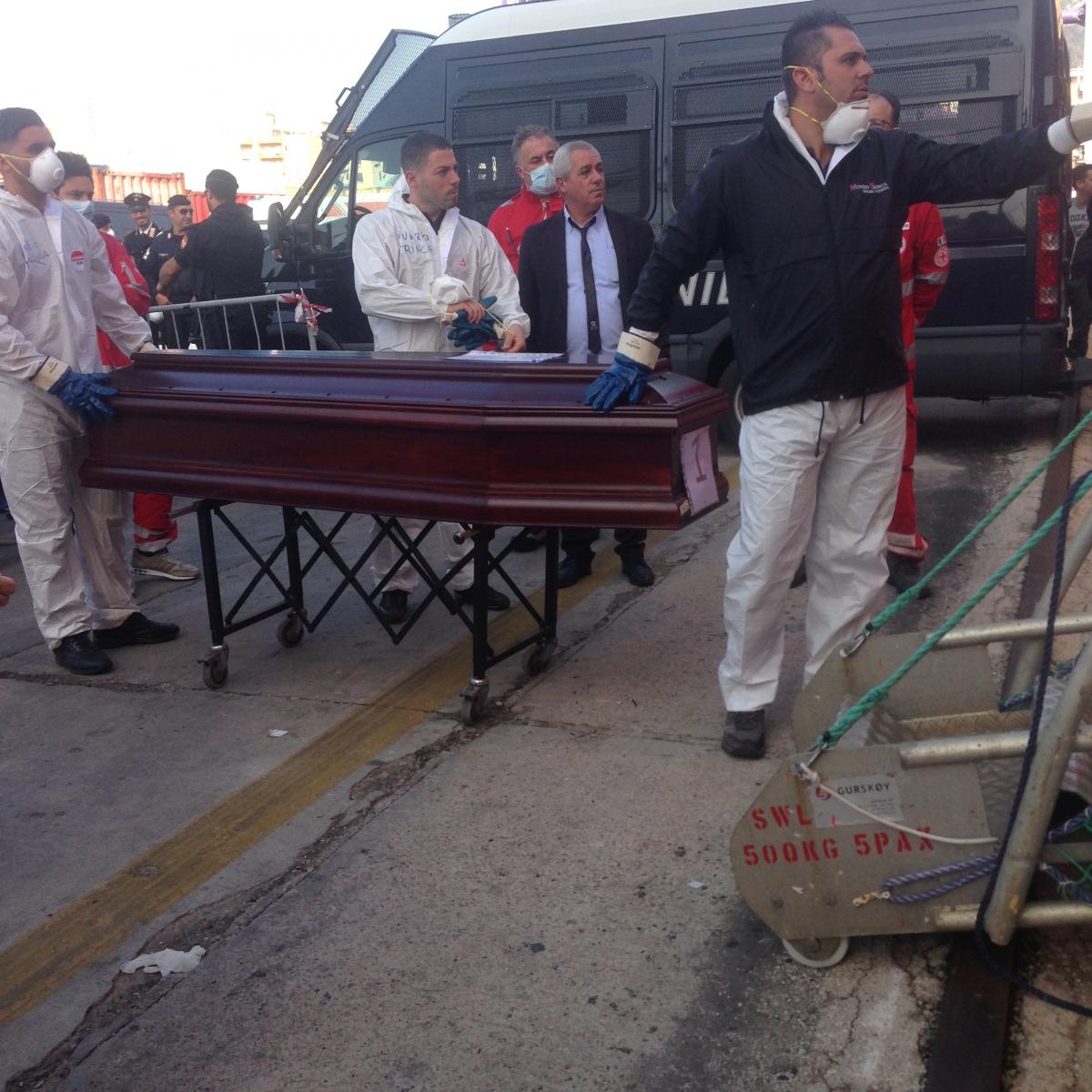 The police come over looking for una ragazza Americana, an American girl, to interpret for the Norwegian ship captain.  I say that I just arrived a week ago and I don’t speak Italian well. He shrugs and tells me to come with him.  There are 17 cadavers on the ship and the police have heard that four were beaten.  They want to see the bodies.

The captain says that the doctors are looking at the bodies now and that they will disembark a few more people and then the bodies.  The police can look then.  One of the officers is holding a printed packet of a few pages with photos of the potential smugglers/traffickers on board and short descriptions.  They say they can tell who might be a smuggler because of how other people treat the person or because they have drone footage of some of the people driving the many rubber dinghies and wooden boats that leave the Libyan coast.  It is not necessarily reliable information- sometimes that person may be the smuggler, other times the smuggler is not on board at all and one of the migrants must drive the boat.

A wooden casket rolls up with a piece of paper with the number one printed on it taped to the front.  I don’t get to see what happens after that because the police chief of Palermo, el capo, tells me I am going to the tribunale to interpret for the ship captain for an official investigation about the dead.

The ship captain asks how long this is going to take.  Fabio, the officer driving the car, says, “non sappiamo,” we don’t know.  The captain hasn’t slept in three days.  He tells me that no one has explained why he is being taken in for questioning. 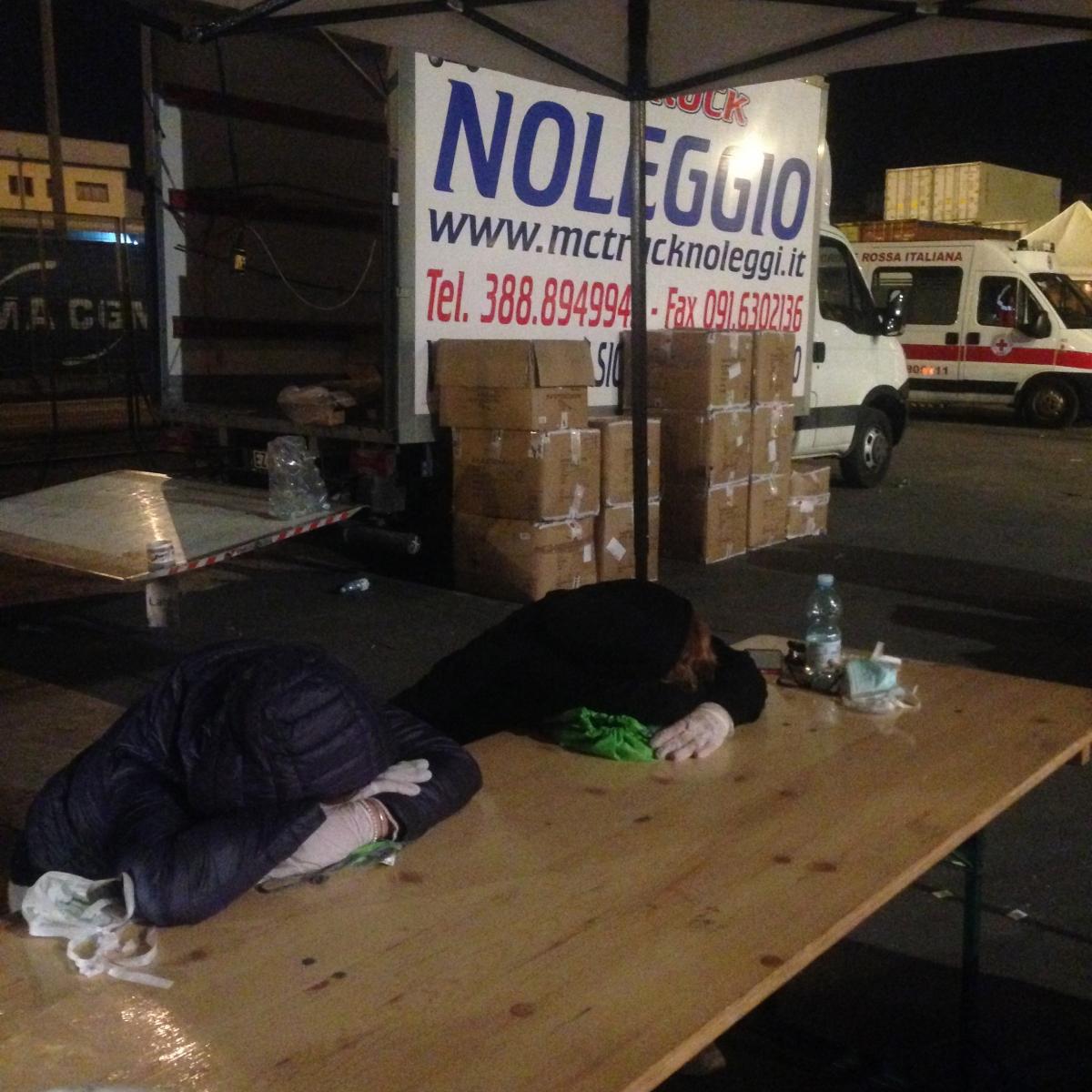 The captain, an assistant police chief in Norway, recounts the rescue mission. On October 21 his ship, the Siem Pilot, picked up more than 700 people on a decommissioned tanker adrift off the coast of Libya.  All that night and the following day they continued to pick people up from smaller rubber and wooden boats until they reached capacity – 1,000 people.  There were many other rubber boats full of people. However all of the rescue ships were at capacity so they used their transport boats to put people back onto the tanker and left them with life jackets and food.  Along the way they found bodies.  Three in one dingy, one in another, nine in another.  The Siem Pilot was the only ship with cold storage so they took as many bodies as they could.

The captain says that the smugglers are constantly motoring around out there, following their own boats so they can remove the engine and bring it back to shore, put it on another rubber dinghy and do it all over again.  The investigator asks if one particular boat with Libyan smugglers was armed.  The captain says, no, not as far as he knows.  He says its clear that smugglers are armed when they hold guns in their hands but other times they keep their weapons close to the bottom of the boat and then its hard to say.  The investigator asks the captain if he goes after the smugglers.  He says, “Saving peoples’ lives is my priority.  But, if I can do that and also go after them, I do.”

After the interview I ask the captain if he has nightmares.  He smiles and says no, that he’s been in the police for a long time.  “This work has changed me though,” he adds.

I go back to the port at 11pm that night. From afar it looks like bags of shiny, gold Christmas tinsel had been dropped all over the parking lot.  Walking closer, some of the bags move and others are still.   Closer yet and there are human forms, some completely obscured by the space blankets, others revealing a head or feet, others sitting up on a bench or on the ground.

Four hundred people are still on the ship.

I talk with the two women who distribute the Crocs, quickly sizing up each persons’ feet by sight as they get off the boat.  They’ve been there since four in the morning.  I ask them when they think it will end.  They say, “non sappiamo.”  There is an issue with having enough buses to take people away and a lack of immigration authorities to do the basic registration so the pace of disembarkment has slowed.

It is just another night outside the gates of the Port.  The road home is lined with sex workers. Some are talking with men in cars, others are milling around. I wonder who is looking out for them when they get into a car, if anyone knows where they are.

Leanne Tory-Murphy is a freelance reporter and labor and immigrant rights activist.  She is currently living in Palermo, Sicily pursuing research on migration issues as a Fulbright scholar.