The blue morning painted my bedroom into a dark ocean. I was at the bottom of it. Sunken by fears that moved through shadows like cold currents. Drawing breath was work. Lifting my head was hard labor.

I reached for my phone, typed in “NY Times.”

The previous night, I met friends at a bar in Bushwick to watch Hillary Clinton win the presidency. But state after state went red for Trump. I left before the final votes were counted, hoping to wake up and see her shimmy a victory dance on the news.

Then I read the Times’ headline, “Trump Triumphs.” Sitting up, I shook my head as if throwing out the words. Something broke. Inside me. Like bone snapping. Like a photo of home being torn.

In the shower, I stared at water swirling into the drain. I got dressed, left for work beneath a grey, cloud filled sky. All around me I saw strained faces. Construction men sullenly strapped on tool belts. Parents somberly took kids to school. People lined up sadly for the bus. Something died in us. Some hope that America could accept our humanity. Where that hope had been was now an emptiness. It echoed so loudly that I leaned on a streetlight and screamed inside myself: Oh God. Oh God. Oh God.

Rubbing my face, I blinked, the world was still here. Trump was still president. The man had called us rapists, terrorists, he said our neighborhoods were warzones and we were losers. Now he was putting his hands on the power of the state and soon would hurl it at us.

I knew that under his administration, some of us will be arrested. Some of us, deported. Some of us fired. Some of us killed. I felt my friends within me. Already terrified. Political homies who’d be surveilled and beaten at protests. Students who were immigrants. Neighbors who’d go back to jail.

My phone buzzed, I took it and saw a row of text messages: OMG! — I’m scared of this world — My heart is broken — HATE THIS COUNTRY! I stood there with a phone that buzzed with a new text every second as if I’d taken out my heart and held it as it pulsed with fear. 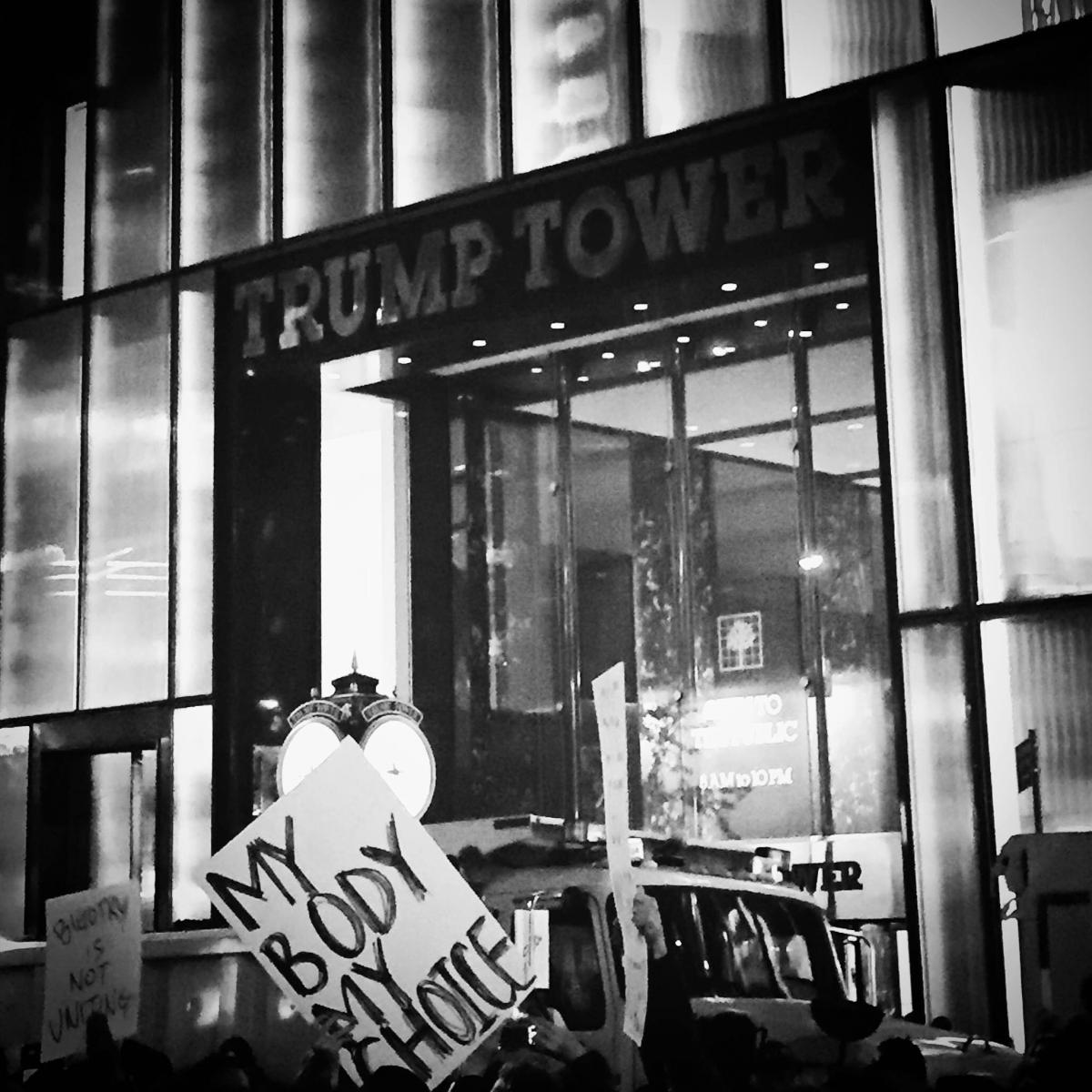 “We survived slavery,” she said, “We got this.”

“Slavery,” I listened to Jamara on the phone and looked from the train window at the Long Island suburbs. Trump won Long Island. Nearly every American city, like New York was liberal blue, surrounded by conservative red suburbs and countryside, packed with whites who threw our nation into the small hands of a reality TV star.

I scanned the white faces on the train. You in the business suit? Or you in the hard hat and paint splattered boots? Did you vote for Trump?

“We did survive slavery,” I said to her in a high squeaky voice, “Although that is a low bar.”

“We have a long history of overcoming,” she spoke in warm, reassuring tones. “Conservatives are trying to hold on to an America that doesn’t exist anymore. Time is on our side. We’re strong. We got this.”

I thanked her and hung up, soon she texted clips of Black Panthers holding up their fists. Moving the phone in front of the window, they looked like giant, Black historical figures, straddling the white suburbs and raising their fists over them, again and again.

“My president is Black,” Young Jeezy rapped from the speakers as we sat on the shuttle bus, students and professors traded looks and smiled as if to say, “What the hell?” Jeezy recorded it after Obama’s 2008 win. Our new president, Trump, was not black and definitely not getting rap songs showing him love.

“They playing this to keep our spirits up,” a young woman said to everyone. “Them DJ’s at Hot 97 are funny. They know what we’re feeling.”

I nodded and saw a dreamy, far-away glaze on people’s faces as if they were transported back in time to the euphoria of Obama’s election. As the song finished, a troubled wind passed through their eyes and one by one, they blinked and were again in the present.

We rolled up to the college and I went to New Academic Building. I loved it here. The halls were a little United Nations where Muslim women in hijab laughed with Caribbean guys who then shouted to Long Island white jocks about a party who in turn invited a Dominican woman with dyed green hair who slung her arm around her girlfriend and said sure, we’ll come through. It was fun. It was New York kids becoming New York adults.

Today the halls were quiet. Professors huddled at doorways, talking low, rubbing words over each other like packs of ice on a bruise. When I got to my class, the students were sitting in the dark, staring at their hands. When I asked what was going on, a young man raised his face and said, “It feels like someone died.”

I asked them to tell me, to lay it all down. One by one, they spoke of fear and shock. One of the women said white people were walking with their chest out. Full of pride. In the back, a disabled man who always dressed like he was going to a club. “I was at the station and a car of white guys sped by,” he said, face scrunched in post-shock confusion. “They yelled get out of here nigger!”

Others said they felt trapped by the way others looked at them; like they were surrounded by a million little Trumps. “Somehow,” said a student flipping through her book nervously, “the wall he wanted to build was built overnight. It’s in every city and street. It’s in my family. I can’t talk to them. I get angry just thinking about it.” She looked at everyone. “Maybe the wall was always there but we chose not to see it.”

Speed. Everything was picking up speed, going too fast, blurring into a montage. I was on the train, rushing out of Long Island to the city and when I blinked, a roll of images flashed. Trump. Rain. Scared eyes. The wall. Nervous flipping of book. Rain.

The wall was in my chest. Breathing was hard labor. Muscles tense as if waiting for a giant fist to hammer me down. For the whole campaign, whole swaths of white male America had been squeezing their hands into fists and now the fight started.

The wall was in my mind. What thoughts could I think? What stories could I tell myself? When would I be told that my truth was illegal?

The train rolled into Penn Station. I dashed out, up to the street, the lights, the noise, the people. My friends texted me directions to the march and I felt them, heard them before I saw them. Loud rhythmic chants. A thundering river of people, some holding placards, some making a megaphone with their hands and booming out no to Trump, no to hate, no to fear. We wove through the thousands protesting in front of Trump Tower like a centipede but in the shuffle, broke apart. I stood there, feeling everything rising up, up, up into my throat. The rage at America. The sorrow of lost hope. The blue lit morning. An ocean of sorrow. The silence that moves through our lives. All of it rose to my lips and I just shouted, “FUCK TRUMP! FUCK TRUMP! FUCK TRUMP!”

How We Ended Up in This Mess: Democrats Ceased to Represent Ordinary People
By Danny Katch

Movement Building in a New Political Moment
By Harmony Goldberg