As you know, the Trump brand is synonymous with big league style, classy service, amenities that are so, so good and, more recently, revulsion. Over the next four years you might notice discrepancies in the level of tranquility you’ve come to expect at Trump properties.

You might, for instance, be exiting your limousine outside Trump International Hotel and Tower one fine afternoon when, instead of a doorman offering to carry your shopping bags, you are greeted by unwashed professional protesters. “Shame, shame, shame,” they’ll shout as you scurry inside, leaving a trail Bergdorf Goodman merchandise scattered behind you.

Or perhaps you’re unwinding with a glass of sherry on Bar d’Eau’s pool deck at Trump SoHo after a soothing hammam experience, when a flaming bag of feces lands on your lap — catapulted your way, no doubt, from one of the lightweight losers below.

Nobody feels your pain more than Donald J. Trump. Afterall, our new president more than anyone is the target of unprovoked outrage on the part of immigrants, women, Muslims, Jews, African-Americans, Latinos, Asians, gays, lesbians, transgender people, unionists, Polish construction workers, Megyn Kelly, former-beauty pageant contestants and pretty much everybody in New York who isn’t wealthy and white.

To the loyal visitors and tenants of Trump complexes across the city, we sincerely apologize. To everyone else, this map of Trump real estate might come in handy. 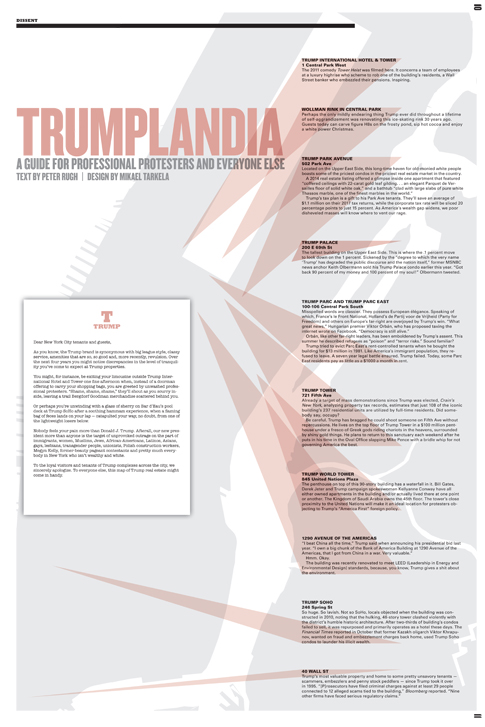 1 Central Park West
The 2011 comedy Tower Heist was filmed here. It concerns a team of employees at a luxury highrise who scheme to rob one of the building’s residents, a Wall Street banker who embezzled their pensions. Inspiring.

Wollman Rink in Central Park
Perhaps the only mildly endearing thing Trump ever did throughout a lifetime of self-aggrandizement was renovating this ice-skating rink 30 years ago. Guests today can carve figure H8s on the frosty pond, sip hot cocoa and enjoy a white power Christmas.

Trump Park Avenue
502 Park Ave
Located on the Upper East Side, this long-time haven for old-monied white people boasts some of the priciest condos in the priciest real estate market in the country.

A 2014 real estate listing offered a glimpse inside one apartment that featured “coffered ceilings with 22-carat gold leaf gilding. . . an elegant Parquet de Versailles floor of solid white oak,” and a bathtub “clad with large slabs of pure white Thassos marble, one of the finest marbles in the world.”

Trump’s tax plan is a gift to his Park Ave tenants. They’ll save an average of $1.1 million on their 2017 tax returns, while the corporate tax rate will be sliced 20 percentage points to just 15 percent. As America’s wealth gap widens, we poor disheveled masses will know where to vent our rage.

Trump Palace
200 E 69th St
The tallest building on the Upper East Side. This is where the .1 percent move to look down on the 1 percent. Sickened by the “degree to which the very name ‘Trump’ has degraded the public discourse and the nation itself,” former MSNBC news anchor Keith Olbermann sold his Trump Palace condo earlier this year. “Got back 90 percent of my money and 100 percent of my soul!” Olbermann tweeted.

Orbán, like other far-right leaders, has been emboldened by Trump’s assent. This summer he described refugees as “poison” and “terror risks.” Sound familiar?

Trump tried to evict Parc East’s rent-controlled tenants when he bought the building for $13 million in 1981. Like America’s immigrant population, they refused to leave. A seven year legal battle ensured. Trump failed. Today, some Parc East residents pay as little as a $1000 a month in rent.

Be careful. Trump has bragged he could shoot someone on Fifth Ave without repercussions. He lives on the top floor of Trump Tower in a $100 million penthouse under a fresco of Greek gods riding chariots in the heavens, surrounded by shiny gold things. He plans to return to this sanctuary each weekend after he puts in his time in the Oval Office slapping Mike Pence with a bridle whip for not governing America the best.

Trump World Tower
845 United Nations Plaza
The penthouse on top of this 90-story building has a waterfall in it. Bill Gates, Derek Jeter and Trump campaign spokeswoman Kellyanne Conway have all either owned apartments in the building and/or actually lived there at one point or another. The Kingdom of Saudi Arabia owns the 45th floor. The tower’s close proximity to the United Nations will make it an ideal location for protesters objecting to Trump’s “America First” foreign policy.

The building was recently renovated to meet LEED (Leadership in Energy and Environmental Design) standards, because, you know, Trump gives a shit about the environment.

Trump Soho
246 Spring St
So huge. So lavish. Not so SoHo, locals objected when the building was constructed in 2010, noting that the hulking, 46-story tower clashed violently with the district’s humble historic architecture. After two-thirds of building’s condos failed to sell, it was repurposed and primarily operates as a hotel these days. The Financial Times reported in October that former Kazakh oligarch Viktor Khrapunov, wanted on fraud and embezzlement charges back home, used Trump Soho condos to launder his illicit wealth.

40 Wall St
Trump’s most valuable property and home to some pretty unsavory tenants — scammers, embezzlers and penny stock peddlers — since Trump took it over in 1995. “[P]rosecutors have filed criminal charges against at least 29 people connected to 12 alleged scams tied to the building,” Bloomberg reported. “Nine other firms have faced serious regulatory claims.”