Donald Trump’s nomination of Betsy DeVos as Secretary of Education could be a devastating blow for American public schools.

“DeVos’s agenda is to break the public education system, not educate kids, and replace it with a for-profit model,” John Austin, president of the Michigan State Board of Education, told the Detroit Free Press after her appointment was announced Nov. 23. “It’s like putting the fox in charge of the henhouse, and hand-feeding it schoolchildren.”

DeVos is the daughter of a wealthy auto-parts manufacturer who funded Christian-right causes, and her brother Erik Prince founded the mercenary company Blackwater. She married Dick DeVos, the billionaire heir to the Amway fortune. The two, based in Grand Rapids, Mich., have used their personal wealth to encourage the expansion of charter schools, to prevent any government oversight of their use of public funds or regulation of the quality of education they provide and to aggressively promote the use of vouchers to let taxpayer funds pay for private and parochial schools.

She would be the first Secretary of Education who never attended a public school or sent her own children to one. She has never worked as a teacher, served on a school board, or held any position in government.

DeVos is an even more radical privatizer than either Arne Duncan or John King, President Barack Obama’s education secretaries. Both Duncan and King favored expanding the charter sector, offering these publicly funded, privately run schools more than $1.5 billion in federal grants between 2010 and 2015. The Department of Education’s Race to the Top program offered states the chance of winning millions more if they let the number of charter schools expand. Many states, including New York, then raised their charter caps.

The DeVos family is among the leading donors to the Republican Party. According to an analysis by ­OpenSecrets.org, they have given at least $20.2 million to GOP candidates, party committees, PACs, and super PACs. They also finance far-right groups that promote climate-change denial, oppose marriage equality, and want to cripple labor unions, such as Michigan’s Mackinac Center for Public Policy. Another group they support, the Acton Institute, argues for the abolition of child-labor laws.

“I have decided to stop taking offense at the suggestion that we are buying influence,” Betsy DeVos said in 1998. “Now I simply concede the point. They are right. We do expect something in return. We expect to foster a conservative governing philosophy consisting of limited government and respect for traditional American virtues. We expect a return on our investment.”

The couple’s primary education organization is the American Federation for Children, which PR Watch describes as a conservative 501(c)(4) dark-money group. Her 501(c)(3), which is not allowed to support political candidates, is the Alliance for School Choice. In 2006, the Ohio Elections Commission fined a DeVos-founded group called All Children Matter $5.2 million — the largest election-violation fine in state history — for laundering $870,000 through its national office to avoid the state’s $10,000 limit on individual contributions.  The group did this even after the commission told them that was illegal — and then never paid the fine. According to the most recent report from the American Federation for Children, they gave nearly $5 million in 2016 to pro-privatization candidates in 12 states.

Last spring, she and her husband used the influence of their money to bully Michigan legislators into voting against on a bill proposed by Republican Gov. Rick Snyder that would have provided modest government oversight for the explosion of unregulated, poor-quality and often corrupt for-profit charter schools in that state. Michigan gives nearly $1 billion a year in aid to charters, many of which refuse to disclose their finances and channel contracts to their own officials. According to a Detroit Free Press investigation, 38 percent rank in the bottom quarter of Michigan schools academically. 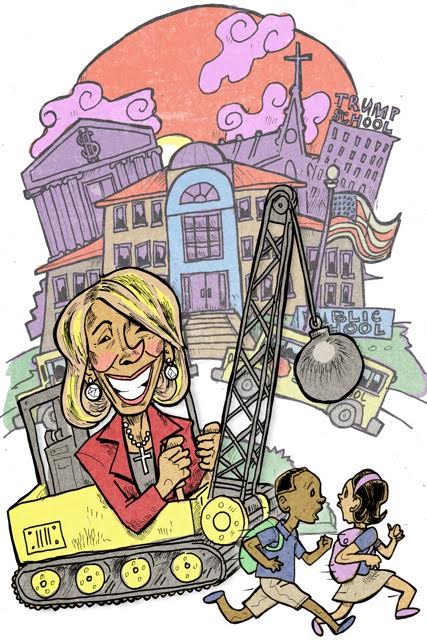 Public-school supporters had some successes in some states in the November election. In Georgia and Massachusetts, multiracial coalitions of unions, parents and school-board members overwhelmingly defeated well-funded privatization efforts. In Washington state, Bill Gates and other technology magnates lost in their effort to unseat judges who had concluded that the public funding of charter schools was unconstitutional in that state

In New York, though, the Republicans who control  the state Senate support expanding charter schools and giving parents tax credits for private and parochial-school tuition. Governor Andrew Cuomo has also promoted the expansion of the charter sector at the expense of public schools. The New York State United Teachers did not endorse Democratic challengers in several extremely close Senate races on Long Island, and parents and rank-and-file teachers who volunteered on their  campaigns were disappointed. At the same time, pro-charter PACs such as StudentsFirstNY’s New Yorkers for a Balanced Albany spent millions to keep the state Senate in GOP hands.  These funds paid for attack ads against the challengers that never mentioned the words “charter schools”—because most Long Island voters do not favor charter schools.

Trump has proposed a $20 billion federal voucher program that  would most likely be financed with Title I funds, which since the mid-1960s have provided additional aid to public schools with large numbers of poor children. He has said that he would use these funds to give state incentives to contribute another $110 billion of their own money to vouchers.

With both houses in Congress in Republican hands, we will have a fierce battle on our hands to withstand the destructive impulses of Trump and DeVos. Aiding them will be a flood of money poured into lobbying campaigns by billionaires, Wall Street financiers, edu-entrepreneurs, and religious institutions, all eager to divert taxpayer funds into private hands and dismantle our public schools.  Public school parents, teachers, and advocates must be smart and work together to withstand this assault.

Leonie Haimson is executive director of Class Size Matters and cochair of the Parent Coalition for Student ­Privacy.