On the campaign trail, and up until the last days before the election, Donald Trump called for increased scrutiny of Muslim-Americans. He mused about establishing a registry for Muslims, voiced support for surveillance of mosques and demanded a ban on Muslim immigration. He said the United States may have “no choice” but to shut down mosques, and told an interviewer, “I think Islam hates us.”

So far as president, Trump has ordered a ban on refugees and travelers from seven Muslim-majority nations, a move that shocked Muslim-Americans and sparked an outpouring of protest. (Federal courts have temporarily stayed enforcement of the order.) He has also brought anti-Muslim ideologues like Steven Bannon into his inner circle.

Now, as Trump moves to consolidate power and enact his agenda, Muslim-Americans are concerned that Trump will indeed intensify scrutiny of their community —  which are already infiltrated by informants in mosques and encouraged to join anti-extremism programs that some worry are a cover for spying on Muslims.

“Things are already bad,” said Fahd Ahmed, executive director of Desis Rising Up and Moving, a New York-based group that organizes the South Asian community. “But we do think this administration has shown a commitment to making things worse.”

It won’t be hard for Trump to carry out his campaign promises. Presidents George W. Bush and Barack Obama left Trump with a surveillance infrastructure that could easily be expanded and turned on Muslim-Americans.

The roots of the national security state’s targeting of Muslims can be traced back to the aftermath of the September 11, 2001 attacks. The Federal Bureau of Investigation (FBI) shifted its strategy from one of prosecution to prevention of crimes. Instead of waiting for a crime to be committed, federal agents would identify people they thought were likely to commit a terror attack and arrest them before the attack actually happened.

To carry out this shift, the FBI put its informant program on steroids. In the COINTELPRO era — when the FBI, in the 1950s and 60s, targeted socialists, communists and the black liberation movement — the agency employed 1,500 informants, people tasked with infiltrating organizations, gathering intelligence and passing that information on to higher-ups. After 9/11, the number of informants ballooned to 15,000.

In practice, FBI informants fan out to Muslim communities, and, critics say, prey on young men, some with financial troubles, others with mental illness. When informants are successful, they bait their targets into agreeing to carry out an attack they might never have contemplated without the urging of the FBI. Forty percent of terrorism cases tried since 9/11 involved informants, according to a 2011 NYU study.

According to Corey Saylor, who heads the Council on American-Islamic Relations’ project to combat Islamophobia, the FBI’s informant program “impedes First Amendment-protected conversation. So people are afraid to have an innocent conversation about politics, because they might say something wrong.” 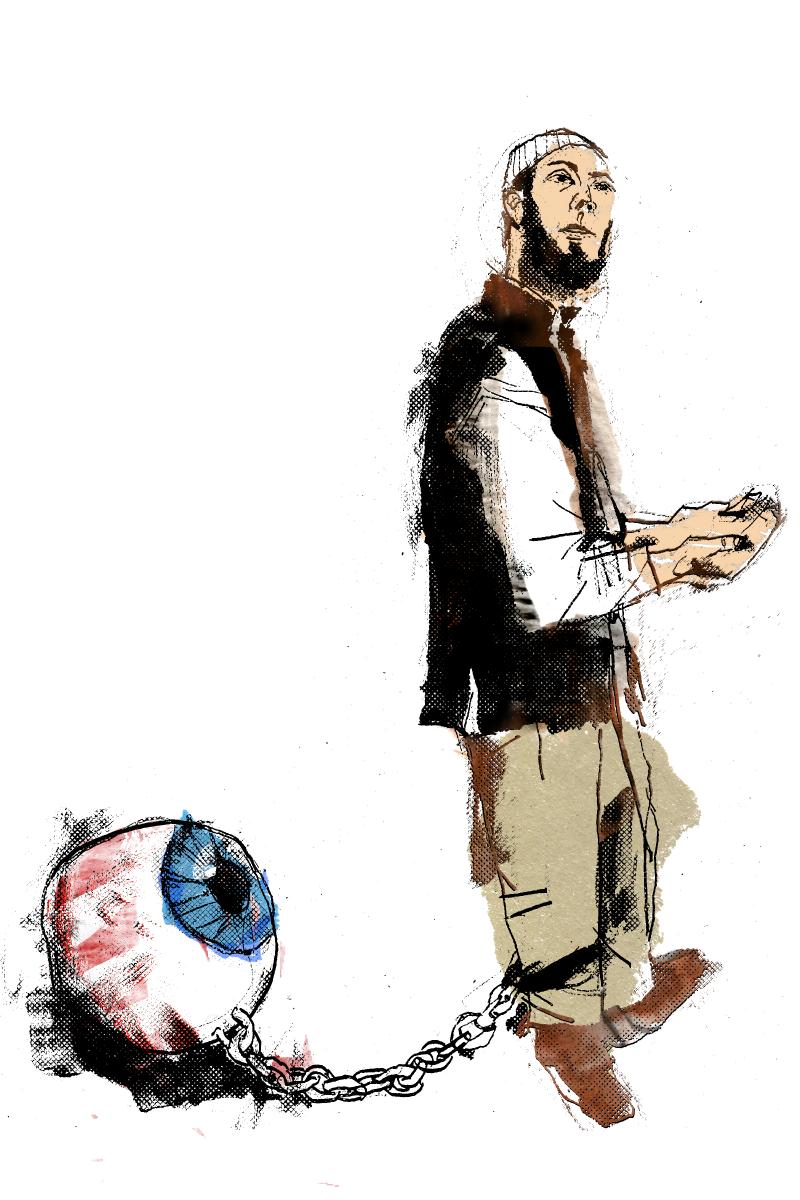 The FBI was not the only agency to infiltrate Muslim communities. The New York Police Department (NYPD), with the help of Central Intelligence Agency officers and funding from the Bush and Obama administrations, instituted its own surveillance program after 9/11. They mapped out New York’s myriad ethnic group, sent their own informants into mosques and student groups around the East Coast and recorded conversations in mosques and restaurants. Under Mayor Bill de Blasio, the NYPD shuttered the Demographics Unit, which carried out the wide-reaching spy program, though the police force continues to deploy informants.

De Blasio has pledged not to share data collected through the city’s IDNYC program with federal immigration authorities, but questions linger regarding information gathered by the Demographics Unit on law-abiding New Yorkers.

“What are they going to do with that information?” asked Afaf Nasher, who heads the New York chapter of the Council on American-Islamic Relations. “We’re pushing for answers with other organizations, not just Muslim organizations, but other groups of people who are concerned with data retention and how the Trump administration may use it, especially with threats of a registry, increased surveillance and whatnot.”

Allies of Trump have urged him to take the NYPD’s model nationwide. In December, Representative Peter King, a Republican from Long Island, told the press he urged Trump, during a meeting, to institute “a program similar to what Commissioner [Ray] Kelly did here in New York.”

The bipartisan nature of surveillance targeting Muslims has led some people, like Zein Rimawi, a founder of the Islamic Society of Bay Ridge, to see little difference in Obama and Trump.

“They spy on us everywhere. In the street, in the mosque — everywhere,” Rimawi told The Indypendent. He would know: the NYPD’s Demographics Unit placed the Islamic Society of Bay Ridge under heavy surveillance. Still, Rimawi said Trump has spooked people in Bay Ridge, a Brooklyn neighborhood that is a hub for Arab immigrants.

“They are afraid. They are waiting for the worst,” said Rimawi.

But the Muslim community has not been paralyzed by fear. Since Trump’s election, Muslim-Americans have mobilized in large numbers. They have lead protests at airports against Trump’s executive order barring refugees and people from seven Muslim-majority countries. They have carried out strikes, like the day-long action, on Feb. 2, that closed up the Yemeni-run bodegas that fuel New York City. And they have rejected federal grants that they see as tainted by a Trump White House.

These federal grants, which total $10 million, were supposed to fund the Countering Violent Extremism Program, a U.S. government effort to get local communities involved in combating radicalism. Under the Obama administration’s anti-extremism pilot program, which was eventually expanded nationwide, hundreds of thousands of dollars flowed to community groups working to stanch the appeal of violent ideas. But while the Obama administration insisted it wanted to focus on all types of extremism, civil liberties groups complained it largely focused on Muslims, stigmatizing a vulnerable community.

There were also concerns that the information collected by nonprofit groups could be turned over to federal law enforcement, and used to go after young people thought to be influenced by radical ideas. Those fears were not unfounded; documents obtained by the Brennan Center for Justice revealed that in 2009, a law enforcement-led community-outreach program to Somali Muslims in St. Paul, Minnesota, was also meant to “identify radicalized individuals.” One community leader told The Intercept that local law enforcement repeatedly asked him for a list of people who participated in the outreach effort.

Under Obama, the anti-extremism program proved controversial, though some Muslim groups accepted the money anyway. But under Trump, accepting the federal grants is increasingly untenable. In February, four groups that work with Muslim and Arab youth declined to accept the federal cash, a move they made after news outlets reported that the Trump administration is considering changing the name of the program to Countering Radical Islamic Extremism. Reuters reported that the Trump administration was thinking about halting efforts that focus on white supremacists, and solely hone in on Muslim radicals.

“It all came down to principle. Five hundred thousands dollars is a lot of money, especially if you’re a non-profit,” said Mohamed Farah, the executive director of Ka Joog, a group that works in the Somali community in Minnesota that rejected a federal grant. “At the end of the day, we work with immigrants, we work with refugees, we work with Muslims and we believe this administration doesn’t stand for what we stand for.” Farah added that there was also concern among Somali-Americans that the anti-extremism program could be used for surveillance.

Muslim groups, along with civil liberties advocates, have also launched a campaign to encourage cities across the country to limit their local police department’s cooperation with the FBI on counter-terrorism. Called Stop TrumpIntelPro Now, a play on COINTELPRO, the campaign, which includes the Council on American-Islamic Relations, Asian Americans Advancing Justice Asian Law Caucus and others, wants to build on a recent victory: convincing the San Francisco Police Department to halt cooperation with the local Joint Terrorism Task Force (JTTF), a program that combines local police and federal agents to fight terrorism. The police department said it was stopping cooperation because confidence in the program had been “shaken,” though it may rejoin the program in the future.

The halt in cooperation came after another local victory in San Francisco. In 2012, a coalition of groups in the city successfully pushed for a local law mandating that police only cooperate with the task force if their activities are in line with state and local laws, which are much more stringent than the FBI’s guidelines on racial and religious profiling. Now, the coalition wants to export that model nationwide.

“If we make clear across the country that our local officers have to follow our local laws, even if they work with the JTTF, the FBI’s partnership, that means that local officers will no longer be allowed to do FBI work that involves, for example, surveilling just because they’re Muslim,” said Christine Sinha, who co-leads the National Security and Civil Rights Program at Asian Americans Advancing Justice Asian Law Caucus.

In the week after it launched, Sinha said, organizers in several cities contacted the coalition, though she would not name them because they had not yet gone public.

“If they can’t commandeer our local resources the way they need to, that does stop the FBI in its tracks a little bit,” Sinha told The Indypendent. “I’m not naive. That’s not going to stop the FBI wholesale. But it at least puts a brake on what the FBI wants to do at a local level.”

The Trump administration loves 'alternative facts' and hates a free press. Your backing keeps us strong. Become a subscriber or a monthly sustainer today and show your support for independent media.