On March 9, Trinidadian immigrant Ravi Ragbir is scheduled to appear for his annual check-in with a deportation officer at the federal building in lower Manhattan.

“I will go in,” he says. “Even though I suspect this may be the day I won’t be coming out.”

No matter what happens, he will not go alone.

“You can easily disappear,” he notes.” So it’s best to have people witness.”

Ragbir knows the power of accompaniment. As executive director of the New Sanctuary Coalition of NYC, he has worked to connect members of 30 congregations, faith communities and other groups with hundreds of undocumented immigrants seeking refuge and support.

“It’s not about the church, or the physical space,” he explains. “We are teaching people to literally walk with those in deportation proceedings.”

As an outspoken immigrant rights activist, Ragbir knows he can set an example for thousands of others facing similar check-ins.

“I don’t want to be a role model, but think I am at the moment,” he says, “especially for immigrants who are saying ‘We’re terrified. But if you look at what Ravi is doing you can understand where you are, and also fight to make change.’”

Ragbir legally immigrated to the United States from Trinidad and Tobago more than 25 years ago, but a 2001 wire fraud conviction made his green card subject to review. Even though he is married to a U.S. citizen and has a U.S-born daughter, the government refuses to normalize his status.

Instead, Immigration and Customs Enforcement (ICE) has exercised prosecutorial discretion to grant him a stay of deportation. His current stay lasts until 2018. But his 15-year-old criminal record makes him an easy target for removal under the Trump administration.

“After Donald Trump’s election I basically cried for days,” recalls Ragbir’s wife, Amy Gottlieb, who is an immigration advocate with the American Friends Service Committee.

“I was totally devastated both because it was going to impact our lives directly, and also because the work I’ve done for the past 20 years is about struggling for humane immigration policies.”

Gottlieb has accompanied Ragbir to almost every one of his check-ins since 2010. This included a period during which he wore an ankle monitor and had to report in person each week — at first — to the Brooklyn office of ICE’s Intensive Supervision Appearance Program.

It was around this time that the The Indypendent published a photo essay showing Ragbir reporting for an appointment while joined by Gottlieb and a supporter from Judson Memorial Church.

“I want people at ICE to know that he is part of a community that supports him,” said Catherine Stetts, as they ate breakfast afterward.

Eventually Ragbir was released from such exhaustive surveillance. Last year, Gottlieb waited with him for hours at his now annual check-in at 26 Federal Plaza. She was relieved when an ICE agent finally confirmed that Ragbir was granted a two-year stay. But then she grew upset when the agent added that Ragbir would still have to check-in again after one year. When she asked why, she was given no clear answer.

“It was their attempt to demonstrate how much control they have over our lives,” she says. “It was really upsetting.”

Now the time to check-in again is fast-approaching.

“We are doing everything we can to make sure he does not get detained that day, but this year it will be a different feeling,” Gottlieb notes. “This year I am afraid of them.” 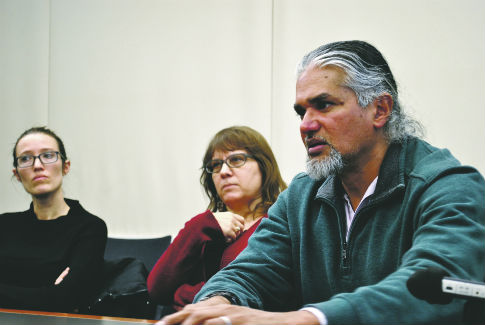 (From left to right) Kyle Barron and Amy Gottlieb join Ravi Ragbir at a support committee meeting to prepare for his check-in with a deportation agent. “it’s hard to plan because we don’t know what will happen,” someone observed. “my mother is coming” gottlieb responded, “so they better be ready to answer questions.” Photo: Peter Rugh

ICE check-ins offer a combination of intimidation and bureaucracy.

“It is almost feels like the Department of Motor Vehicles,” says Kyle Barron when asked to describe the 9th floor waiting room in Manhattan where immigrants who face deportation go to meet with the officer assigned to their case.

“You are told to sit down and wait. Many people are very fearful because they don’t know what will happen when they get called. They could be told to come back, or they could be detained.”

Barron spent three years working with Ragbir at the New Sanctuary Coalition, where she learned quite a bit about the immigration process as head of its Accompaniment Program.

“Many decisions come down to the discretion of individual officers handling the case and whatever the person is feeling that day,” explains Barron. “It helps if you can show you have backing from the community.”

She says such support is key for immigrants who lack a lawyer, and have undocumented family members or friends who cannot come with them to the ICE office.

Now a student at NYU’s School of Law, Barron is also a member of Ragbir’s support committee, where she draws on lessons from her grassroots activism and combines them with legal strategy.

“It’s interesting to see how all the pieces fit together,” she says, “when we are pushing back on the business as usual immigration policies, and trying to see the creative ways to work within and also push the boundaries of the system.”

It was in prison that Ragbir learned how to think creatively about achieving one’s freedom in the face of extreme odds.

“They control when you eat, what you eat, when you get up and sleep, when you have access to the phones and TV and law library, your letters, what you wear,” Ragbir recalls. “At one time I remember they only gave us one jumper. So when you wash it, what do you wear?”

He came to the realization that, “You can determine how you respond, your thoughts. If you do that instead of becoming anxious and fearful, then you can start to ask: ‘this is where I am, but where do I want to be?’”

After serving a two-and-a-half year sentence, he was transferred to immigrant detention, where he successfully fought for his release after another two years.

“You still have control over who you are,” Ragbir says, “and that becomes the force that makes the change.”

In the basement of Judson Memorial Church, a note posted on the wall above his cluttered desk conveys this approach. After hundreds of conversations with immigrants facing deportation because of drug-related offenses, he now advocates for policy changes like the decriminalization of marijuana even as immigration reform remains stalled in Congress.

“If marijuana is legalized and not a controlled substance, then we can stop the double jeopardy,” he notes.

Another wall in his office has a blackboard with a list of names of Central American asylum seekers who had been paired with coalition volunteers the week before. Many were young mothers with no lawyer.

“They come in on Tuesday nights and we pair them up with English-speaking volunteers and an interpreter,” he says. “The place is packed.”

The small groups prepare enough of the necessary evidence in each woman’s case that when she goes in the judge will likely have to set a new hearing date to allow time to review it, instead of moving immediately to deport her.

“Over the years Ravi has steadfastly and humbly expanded the reach of our programs,” says Reverend Donna Schaper, Senior Minister of Judson Memorial Church and co-founder of the New Sanctuary Coalition.

She saw first hand the impact Ragbir had on the lives of others when she accompanied him to his ICE appointments.

“I have seen him, even during his own regular check-ins. . .  reach out to other immigrants scared and alone, to tell them about our programs and encourage them to have hope,” Rev. Schaper recalls.

Now, Rev. Shaper and other faith leaders may walk with Ragbir when he attends his check-in. Politicians Ragbir has worked with over the years may show up as well.

The weekend this issue went to press Ragbir was recognized with the Immigrant Excellence Award by the New York State Association of Black and Puerto Rican Legislators, given to those who show “deep commitment to the enhancement of their community.”

“City and other elected officials at all levels of government can support the residents of their city or district as they go through this process by showing up at check-ins, and reaching out to ICE,” says Ragbir’s lawyer, Alina Das, who is co-director of the Immigrant Rights Clinic at NYU School of Law and has worked on his case for the past eight years.

In the meantime, Ragbir continues to urge everyone who knows an immigrant going through this process, or who wants to support someone who is, to walk with them.

“Everyone is my family right now,” Ragbir says. “I ask them to come with me because maybe it can make a difference, and you may not see me March 10.”

The Trump administration loves ‘alternative facts’ and hates a free press. Your backing keeps us strong. Become a subscriber or a monthly sustainer today and show your support for independent media.