International Center for Photography
250 Bowery
Through May 7

When photographer Cornell Capa founded the International Center of Photography in 1974, there was no way he could have anticipated the world we live in today — one in which every person has the chance to be a photojournalist and/or documentary filmmaker; video, text and images are shared at the touch of a button; and the audience is (potentially) always watching. This is a monumental shift. It changes who gets to tell the story, who gets to access it, how factual the story is, how quickly news travels and even how we think and express ourselves. (Hello, memes and hashtags!)

Yet even with all this change, so many of us still want the same things people wanted in 1974, like peace and justice. Capa's aim was to make ICP a place that would, as its website tells us, "preserve the legacy of 'concerned photography'" — in other words, photography that has the chance to teach and inspire change on both a social and political level. Images, of course, still have the potential to do that. That's one thing that has not changed.

"Perpetual Revolution: The Image and Social Change" meets Capa's original goal while appealing to modern audiences. It holds up a mirror to our current world and the new ways we make and consume media. "Perpetual Revolution" can be interpreted to mean that revolution never sleeps in the age of the Internet, but I believe revolution is perpetual as long as people are dissatisfied. And while people can be dissatisfied no matter what, technology can make people more dissatisfied, or spark new dissatisfaction, because of how it opens a window to possibility.

As you might expect, much of what this exhibit shows is not very pretty, but if you want to change the world, you first must learn what the problems are. You must get deeply uncomfortable, and then you must get angry. So, unlike much art, this exhibit is not a tonic for stress and depression. If anything, it will probably make you feel worse, but, on the positive side, it will also remind you of the unbreakable strength of human beings.

One of the first things you will notice is a NASA video called Climate Time Machine: Global Temperature. It illustrates, via color animation, how global surface temperature has evolved from 1880 through 2016 — global warming's fury clearly emerging in a violent blood-red. It is a real-life horror film, and the scariest part is we still don not know the ending. What is clear is that we have been sleeping on the job.

The exhibit also includes a powerful Democracy Now! clip from when company security guards attacked the water protectors trying to stop construction of the Dakota Access Pipeline in North Dakota (Dakota Access Pipeline Company Attacks Native American Protesters with Dogs & Pepper Spray, September 3, 2016). Despite the chaotic and dangerous atmosphere, reporter Amy Goodman stays calm and gets her story, while the protesters bravely fight for the land. This is five-star reporting that is impossible to look away from.

The section titled The Flood: Refugees and Representation shows images of refugees trying to cross the Mediterranean to Europe, a journey in which more than 5,000 drowned last year. New York Times photographer Daniel Etter captured a stunning, Pulitzer Prize-winning moment from 2015: Iraqi refugee Laith Majid crying and holding his kids after they have finally gotten to Kos, a Greek island. Who knows how many times he worried his boat would go down? It is enough to make you weep too. 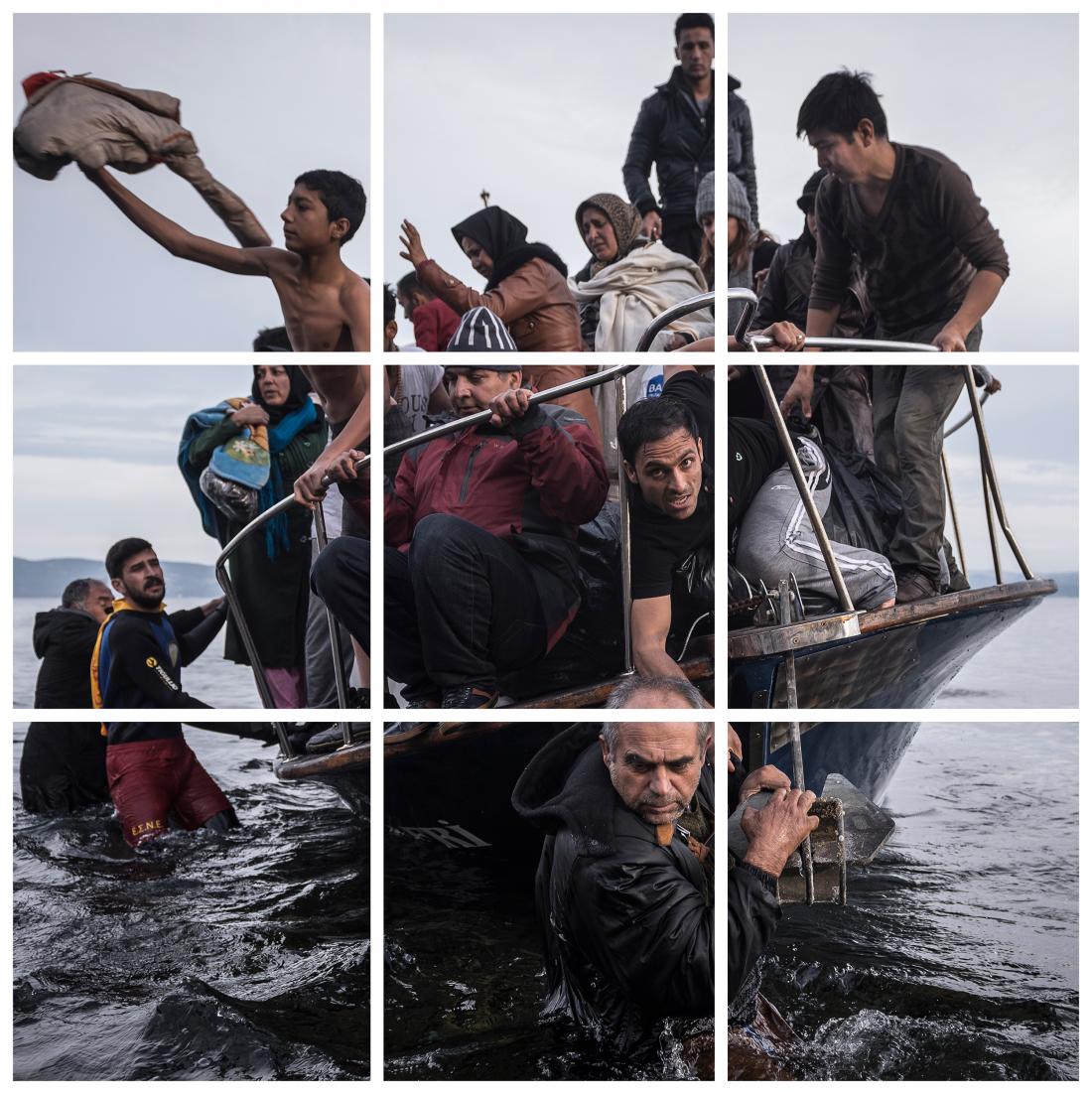 From there we go downstairs — the exhibit covers two floors — to The Fluidity of Gender. Queer progress is proudly, loudly, fiercely on display in videos, on magazine covers and online. The collection shows how crucial the last few years have been for the trans and gender non-conforming communities, and the importance of controlling the way you are portrayed instead of having someone else do it for you.

And while it got better, there's still a lot of crap the trans community has to deal with. Kristen P. Lovell's Trans in Media video focuses on the routine murder and exploitation of trans folks. One generally thinks of "Saturday Night Live" as being pro-queer, but there is a stunning piece of anti-trans garbage in this piece. Lovell's other video, The Tipping Points, features famous trans people — Laverne Cox, Jazz Jennings and Caitlyn Jenner. (The title likely comes from that famous Cox Time Magazine cover.) Taken together, these videos show a lot about privilege in a marginalized community. Cox, Jennings and Jenner have faced struggles, for sure, but are less likely, I believe, to wind up in the dangerous situations the average trans woman might find herself in. Eight trans women of color were murdered in just the first three months of 2017.

Men of color are, of course, also at risk of being killed. Black Lives (Have Always) Mattered is housed in a too-small room that does not allow for the broad exploration the subject warrants. Sheila Pree Bright's video, #1960Now: Art + Intersection, tackles the response to the killing of Philando Castile in Minnesota last year, but the lack of audio weakens the effect.

Terror of a different sort can be found in Propaganda and the Islamic State. It is overwhelming to process all the videos in this section, and you may not have much motivation to understand such viciousness, at least if you are anything like me. For the sake of journalism, I viewed Eid al-Fitr in the City of Ar-Raqqah, a video which looks like a Norman Rockwell illustration come to life, or a fun night at Coney Island. The jihadi sees himself much differently than we do.

The Right-Wing Fringe and the 2016 Election is, like the Black Lives Matter section, a lost opportunity. You'll see status updates from Trump and the alt-right projected on a wall. If you don't get enough of that on Twitter or Facebook, then, by all means, knock yourself out.

Visiting this exhibition is akin to going to an antique store run by a hoarder. You have to do a lot of searching to get to the treasures. It would take a week, maybe more, to consume everything here. That doesn't mean you should skip it. In fact, I would go so far as to say you can't afford NOT to see it: If you have been sleeping, this will wake you up. And if you already consider yourself awake, it might still give you a Red Bull jolt you didn't even know you needed.