The Indypendent
Menu
A Free Paper for Free People
Participants in the Climate March in Washington, D.C. on April 29. Credit: Flickr/Becker1999.

Just over a year ago, diplomats from around the world were celebrating the final ratification of the December 2016 Paris Agreement, proclaimed to be the first globally inclusive step toward a meaningful climate solution. The agreement was praised as one of President Obama’s signature accomplishments and as a triumph of his “soft power” approach to world affairs. But even then, long before Donald Trump and his coterie of plutocrats and neofascists rose to power pledging to withdraw from the agreement, there were far more questions than answers.

First, recall that the Paris Agreement was based entirely on countries voluntarily submitting plans outlining their proposed “contributions” to a climate solution.  This was the outcome of Obama and Hillary Clinton’s interventions at the ill-fated 2009 Copenhagen climate summit, where the U.S. delegation made it clear that it would never agree to mandatory, legally binding limits on global warming pollution. While most global South representatives at successive U.N. summits sought to preserve that central aspect of the 1997 Kyoto Protocol, rich countries united during the years between Copenhagen and Paris behind the notion that climate measures should be strictly voluntary.

Secondly, the Paris Agreement contained no means of enforcement whatsoever. While the text was abundant with words like “clarity,” “transparency,” “integrity,” “consistency,” and “ambition,” there’s literally nothing to assure that such aspirations can be realized. The only official body focused on implementation and compliance is mandated to be “transparent, non-adversarial and non-punitive.” Countries are urged to renew their proposals every few years, with a stated hope that the various “Nationally-Determined Contributions” to climate mitigation will become stronger over time. But if a President Trump or a potential President Le Pen chooses to do the opposite, there’s nothing but vague diplomatic peer pressure standing in the way.

Third, the various plans submitted prior to Paris fell far short of what is needed to prevent catastrophic destabilization of the earth’s climate systems. Numerous assessments of the plans that countries brought to Paris suggested an outcome approaching 3.5 degrees Celsius (6.3°F) of warming above pre-industrial levels by 2100, far short of the stated goal of a maximum of 2 degrees, much less the aspirational goal of only 1.5 degrees that was demanded by delegates from Africa and small island nations. We know, however, that at the current level of just over 1 degree Celsius (1.8°F)  in average temperature rise, we are experiencing uniquely unstable weather, Arctic ice is disappearing and catastrophic storms, wildfires, droughts and floods are disproportionately impacting the world’s most vulnerable people. Two degrees is very far from a “safe” level of average warming; it is far more likely to be the 50-50 point at which the climate may or may not rapidly shift into a thoroughly chaotic and unpredictable state.

The global climate movement responded to the Paris outcome with an impressive showing of skepticism and foresight. Thousands of people filled the streets of Paris itself, declaring that the U.N. conference had fallen far short of what is needed, and parallel demonstrations voiced similar messages around the world. Last spring, a series of worldwide “Break Free from Fossil Fuels” events temporarily shut down major sites of fossil fuel extraction and transport on every continent, including major actions against oil transport by rail in the northeastern and northwestern United States, a massive convergence to shut down Germany’s most polluting coal mine and a boat blockade of Australia’s biggest coal port. Last fall and winter, the encampment at Standing Rock in North Dakota brought together the most inspiring alliance of indigenous communities and allies we have seen yet and encampments inspired by Standing Rock have since emerged at the sites of a handful of major pipeline projects across the United States.  Midwestern activists are responding with renewed determination to challenge the Trump administration’s move to resurrect the dreaded Keystone XL pipeline, which would transport toxic, high-carbon tar sands oil from Canada to the Gulf of Mexico.

It remains to be seen how much the current administration’s excesses will curtail longer-range climate progress. Obama’s Clean Power Plan is clearly on the chopping block, but independent estimates have suggested for some time that this represented (at best) only an incremental step beyond business as usual. The more internationalist voices in the Trump administration want the United States to remain a party to the Paris Agreement, hoping that it can be weakened even further to benefit global fossil fuel interests.

Meanwhile, techno-optimists like Bill Gates and Michael Bloomberg argue that the economic benefits of continued renewable energy development are compelling enough to keep their expansion on track for the next several years. In many locations, renewable installations are already far more cost effective than fossil fuel plants, and a new report from the Union of Concerned Scientists reveals that five U.S. states now rely on renewable resources (including big hydroelectric dams) for more than 65 percent of their in-state energy production. Employment in solar and wind energy is fast approaching 10 times the number of coal jobs in the United States, and nearly 2 million people are reportedly employed in energy conservation and efficiency. Low oil prices have driven a rapid decline in the most extreme forms of fossil fuel extraction, though increased automation in conventional oil and gas drilling has greatly enhanced the profitability of many such operations. Meanwhile, numerous state and local climate initiatives are continuing to partly offset the long legacy of climate inaction — and now overt sabotage — at the federal level. 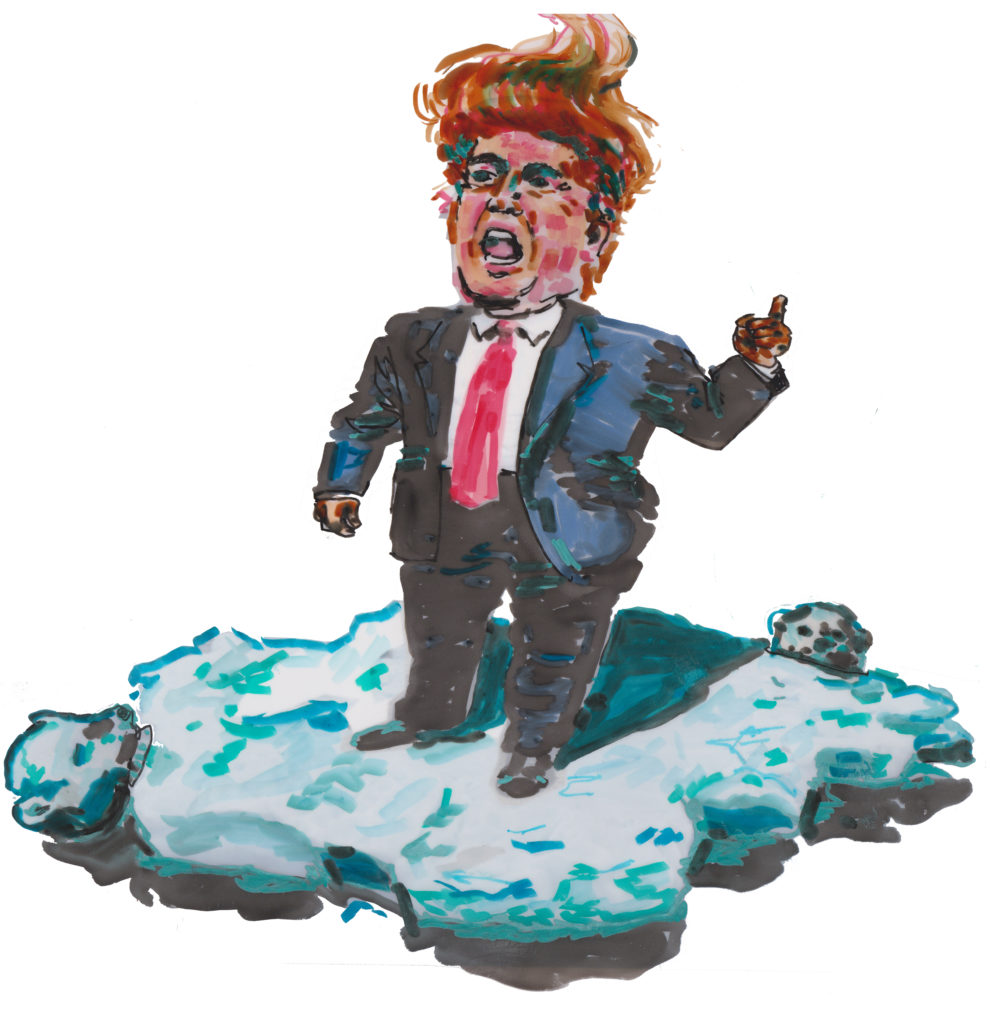 But small measures are no longer enough, as the consequences of an increasingly unstable climate wreak havoc on communities around the world. Scientists now agree the atmosphere has a finite and ever-shrinking “carbon budget.” If we exceed this maximum in accumulated carbon emissions since the dawn of the fossil fuel age, it could become physically impossible to restabilize the climate before many thousands of years have passed. Long before then, the atmospheric conditions necessary to sustain complex life on earth, much less a moderately stable human civilization, could be lost forever. We need to dismantle the fossil fuel economy in just a few short years, reducing consumption every year for the foreseeable future. Thus the Trump agenda is not just a temporary setback, but an existential threat to our survival. The New York Times opinion page editors were not exaggerating when they headlined a recent series of environmental case studies from around the world, “The Planet Can’t Stand This Presidency.”

We also know that past administrations, and governments around the world, have thoroughly failed to implement a proactive climate agenda. Obama’s “all of the above” energy policy, embracing renewables and energy efficiency while simultaneously expanding fracking and offshore oil drilling, was a disaster for the planet as well. A capitalist system that demands unlimited growth — and constantly holds our jobs and economic well-being hostage to that overarching goal — would likely respond to decreasing consumption of resources with all the fury of an economic depression, shifting the worst impacts onto the most vulnerable people while bailing out the wealthy and powerful. This only reinforces what climate justice activists have been saying for some time now: that campaigns for climate action can only succeed as part of a holistic and fully intersectional liberation movement. We need to challenge all the institutions that blame our problems on immigrants and poor people while simultaneously threatening planetary survival. We need to challenge all forms of oppression, create genuinely sustainable and regenerative alternatives, and act boldly upon our understanding that the planet can no longer stand this economic system.

Briant Tokar is the author of Toward Climate Justice: Perspectives on the Climate Crisis and Social Change (New Compass Press, 2014). Links to his other writings can be found online at social-ecology.org.