Underneath the hum of the Brooklyn-Queens Expressway, crowds file past Third Avenue towards Sunset Park’s repurposed waterfront factories. No, they won’t be clocking in to the assembly line for an eight-hour day of union wages — they’ll be mixing with peers at a $75-a-head wine tasting then wandering Industry City’s open art studios, faces flushed with drink instead of sweat.

Faced with ongoing waterfront redevelopment, Sunset Park residents fear that their century-old industrial hub is on course to become Brooklyn’s next haven for the wealthy. The working class neighborhood has seen rents double in the past decade, forcing many residents out of the neighborhood completely. Growing up in Sunset Park, the city “didn’t fix any sidewalks, streets or parks,” said Junior Allende. “We grew up with everything broken, we grew up with everything falling apart.”

But since the city and real estate realized the neighborhood’s potential to attract affluent newcomers, the classic signs of gentrification have followed closely. “I’ve been seeing the same buildings we lived in being fixed more than we’ve ever seen. A whole neighborhood being fixed,” Allende explained.

“If they’re successful and they bring in luxury hotels, that’s pretty much the end of the industrial waterfront.”

Industry City, formerly known as Bush Terminal, is comprised of repurposed warehouse space between 32nd and 37th Streets on Third Avenue, and from 39th Street to Second Avenue’s waterfront.

Protesting displacement in their community, on Saturday, May 20 about 20 UPROSE members gathered on both corners of 36th street. One side called out “Sunset Park” and the other responded “is not for sale!” as passersby hurried down the block toward the wine tasting.

The protests are organized almost weekly by UPROSE, a Sunset-Park based community organization that has fought the transformation of Industry City since it was purchased four years ago by Jamestown Properties, the same development company behind Chelsea Market in Manhattan.

The 16 waterfront factories that comprise Industry City not long ago employed much of Sunset Park’s working-class and immigrant neighborhood, making it one of New York’s largest walk-to-work communities.

But the city’s industrial sector has been in decline for years. Between 2000 and 2012, Sunset Park lost 52 percent of its manufacturing jobs, according to the city comptroller’s office.

Now with projects like Industry City luring high-tech and artisanal food companies to the waterfront—as well as tenants like the training center for the Brooklyn Nets and offices of Time Magazine — neighborhood residents sense a shift happening.

“Everyone is concerned about displacement. Whether they know the specifics about the zoning proposed by Jamestown or not, we’re all feeling this pressure” Ana Orozco, Climate Justice Policy & Programs Coordinator at UPROSE told The Indypendent. 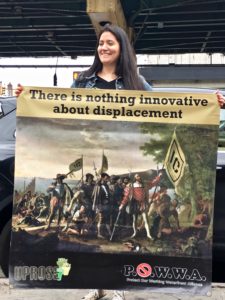 While it may seem counterintuitive that an environmental justice group wants to protect an industrial zone, UPROSE sees the waterfront as an ideal spot to manufacture and export climate-friendly technology while also reclaiming some of Sunset Park’s lost manufacturing jobs.

“We understand that we have to shift away from industry to stop climate change. But it can’t happen overnight. People rely on these industries,” Orozco said. If the city is going to make a serious move to renewable energy sources, she continued, “it needs to be producing and manufacturing wind and solar devices.”

Industry City is currently zoned for industrial use, but Jamestown Properties has submitted plans to rezone sections of the waterfront to mixed-use. This is a loophole used by developers, as mixed-use permits both residential and industrial units. In practice, however, residential usage attracts significantly higher rents, meaning mixed-use zones are a stepping stone to fully residential development and regarded as a harbinger of gentrification.

Orozco pointed to other waterfront neighborhoods like Williamsburg, where despite fierce community opposition, deindustrialization became the first step in the ultimate gentrification of the neighborhood.

“If they’re successful and they bring in luxury hotels, that’s pretty much the end of the industrial waterfront,” Orozco added.

For two hours while people streamed into the gourmet food hall and open studios, UPROSE members flew red flags with the word displacement crossed out, talking with neighbors and handing out flyers to interested visitors.

Two men wearing brown custodial Industry City uniforms, presumably on break from their jobs inside, stopped for coffee at Cafe La Morena, the corner bodega, catching up with community activists and neighbors.

Industry City promises to bring some 20,000 jobs back to the area over the next 10 years and according to a company spokesperson, already employs roughly 2,000 Sunset Park residents.

But many of the companies that have been moving from Manhattan into Industry City come along with their employees. More so, the jobs created by Industry City are not comparable to those manufacturing jobs replaced, said Orozco, who’s been a climate and social justice organizer for more than a decade.

“The jobs that are available to the community inside Industry City are service sector jobs,” she said. “If somebody wanted to raise a family and live on their own, these jobs offered at Industry City are not going to meet that need.”

On the walk from the 36th Street subway stop, continuing past Ruben’s Coffee Shop which still serves a cheap cafe con leche, one eventually reaches Industry City, home to the $18 dollar cup of coffee and a restaurant that only serves avocado-based dishes.

“We no longer have the bodegas where we would shop, a lot of the affordable supermarkets have closed, and it’s intimidating to the community,” said Sylvia Gonzalez, a neighborhood resident.

And as the neighborhood’s character changes, residents have begun questioning their future in Sunset Park.

“I used to work on 47th, between 2nd and 3rd Avenue,” recalls Antoinette Martinez, a lifelong resident of Sunset Park and a member of UPROSE. “I would not walk, I would run to work so I could get there on time.”

When Martinez’s grandparents moved to Brooklyn from Puerto Rico, they bought a house in Sunset Park and she grew up in the same house. Now despite her strong roots in the neighborhood, after her grandparents were priced out and returned to Puerto Rico, she can’t afford a place of her own.

“It’s heartbreaking,” Martinez added, noting that the political and economic forces behind gentrification often overshadow the personal stories like hers.

“My brother is buried in Greenwood Cemetery. I could walk to go visit my brother and I would want to stay in this community because this is where my whole life is,” she said. “And I can’t because of all of these political factors.”

But it may be these very personal stories that shift public opinion.

While the activists’ message was generally dismissed by those headed to Industry City, after engaging in a dialogue, some came around.

Visiting Industry City to see her work exhibited, Lucia Tapiero, a tourist from Colombia, said the protest piqued her interest and after a conversation with activists, shifted her point of view.

“It’s a really cool space but I understand what the protesters are saying,” Tapiero said. “I think that the neighborhood is much more valuable than the things that are happening inside Industry City.”