The Indypendent
Menu
A Free Paper for Free People
May Day demonstration in Putilov, 1906, Boris Kustodiev. 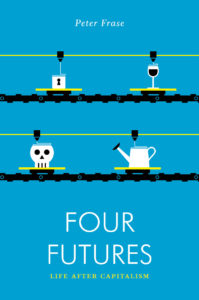 It’s hard to focus on the far-off future when the present looks like the second term of the old slogan “socialism or barbarism” has come true. But no matter who was elected in November, the underlying structural issues would largely remain the same: the seas are rising, the other animals are dying and the robots are coming for our jobs.

Although a slight book, Peter Frase’s Four Futures is an ambitious attempt to grapple with what climate change and automation mean for left politics. Its foundational premise is that what the Frankfurt School optimistically calls “late capitalism” is not going to survive forever and we can’t return to the social democracy of the 20th century. We can only go forward — or backward — into the unknown.

The title refers to his attempt to schematize four possible future worlds, plotted on the axes of abundance vs. scarcity and equality vs. inequality:

To attempt to figure out what each would look like he draws on science fiction as much as social theory. Move over, Marx, Foucault and Spivak; Frase is more interested in discussing “Star Trek,” the graphic novel Transmetropolitan or the novels of Kim Stanley Robinson.

Crucial to Frase’s project is that elements of each potential future are already present, just unequally distributed. His simplified “ideal-types” are meant to depict the possibilities immanent in the present, amplified and played out to their logical conclusion.

We see elements of “rentism,” for example, in the legal sparring over the generic production of life-saving anti-retroviral drugs by poor countries; although it costs little or nothing to make each individual unit, profit-maximizing companies jealously guard their “intellectual property.” (Economists use the term “rent” to describe the money that accrues to people just for owning inherently finite resources, such as land or oil, as opposed to the money that is made through labor — yours or someone else’s.) The rise in importance of non-material forms of economic production could mean the promise of great abundance for all, in one possible future, but present legal and political systems make it instead the source of great profits, accumulating mostly to the benefit of holders of copyrights and patents. Ask Google — or Aaron Swartz — if information wants to be free.

Four Futures is not intended to be an exercise in crystal ball gazing or determinism. Instead, Frase places contingency and politics at the heart of his vision. He is resolute that what the future looks like and how we get there is a question to be decided by our collective action(s). But orienting ourselves against the horizon can be a way of figuring out which direction we want to walk. Speculating about potential futures allows us to see the possibilities of the present and articulate goals beyond just reacting to the daily deluge of new outrages under Trump.

Although it occasionally reads a bit like a left-wing book report, Four Futures is a surprisingly entertaining counterweight to the dystopian reality of our present. Marx famously fulminated against trying to sketch out visions of future utopias, but Frase convinced me that he needed to lighten up and read some speculative fiction.

Image: “May Day demonstration in Putilov, 1906”  by Boris Kustodiev.