Within the rusticated limestone and red brick walls of the former John Jay High School, a drama is playing out that encapsulates the escalating tension over racial segregation within the New York City school system. Four schools currently inhabit the century-old building that fills the block between Fourth and Fifth streets on Seventh Avenue in Park Slope. Three serve a majority Black and Latino student body, while a fourth, newer elite school caters largely to white students.

Jill Bloomberg, principal of Park Slope Collegiate, one of the nonwhite schools on the John Jay Educational Campus, has been making noise about the city Department of Education’s (DOE’s) discriminatory policies. Now she is under investigation — an attempt by Schools Chancellor Carmen Farina and the DOE to silence her, according to a civil-rights lawsuit Bloomberg’s attorneys filed in federal court in May.

“You are not allowed to say that the DOE is racist,” a supervisor chastised Bloomberg in 2011, according to her lawsuit. The scolding followed a public meeting held by the Panel on Education Policy where Bloomberg criticized members of the school system’s governing board for its plan to open Brooklyn Millennium, an offshoot of a predominantly white Manhattan academy, on the John Jay campus. It was the first of multiple warnings passed on to her for speaking out.

Bloomberg argues that the selective academy has benefited from an outpouring of resources from the DOE, at the expense of other students. Meanwhile, Black and brown kids on campus have come under heightened scrutiny from John Jay security.

“My daughter passes through a metal detector every day,” a Park Slope Collegiate parent told The Indypendent. “The first message she gets each morning is, ‘We do not trust you.’”

“You are not allowed to say that the DOE is racist,” a supervisor chastised Bloomberg in 2011, according to her lawsuit.

In one instance, a student was detained and eventually arrested when security guards claimed a pin holding the student’s broken glasses together was a weapon. Working with the nonprofit Integrate NYC 4 Me, students painted a mural on Collegiate’s walls that depicts students passing through a metal detector. On the other side of the metal detectors, they raise signs that read “No more scanners” and “We are students, not criminals.”

In May 2015, a superintendent, Karen Watts, called on Bloomberg to inform her that Chancellor Farina was not pleased about recent public comments she had made about policing on campus, and urged her to remain “neutral about political issues.”

“I understand that taking a position against racism is not a neutral position,” Bloomberg told The Indy. “We don’t make any apologies for that. We have a decidedly public and transparent position against racism, and we speak out against policies that have a disproportionate impact on Black and Latino students. The goal of this investigation is to marginalize that.”

The last straw appears to have come this January, when Bloomberg sent a letter to the head of DOE sports programs, Eric Goldstein, and Superintendent Michael Prayor, complaining of unequal access to sports facilities. Bloomberg noted that the mostly-white Millennium Brooklyn has 1,261 students, yet received 17 sports teams, while the other three schools on John Jay’s grounds, with 1,859 predominantly Black and Latino students, got nine. 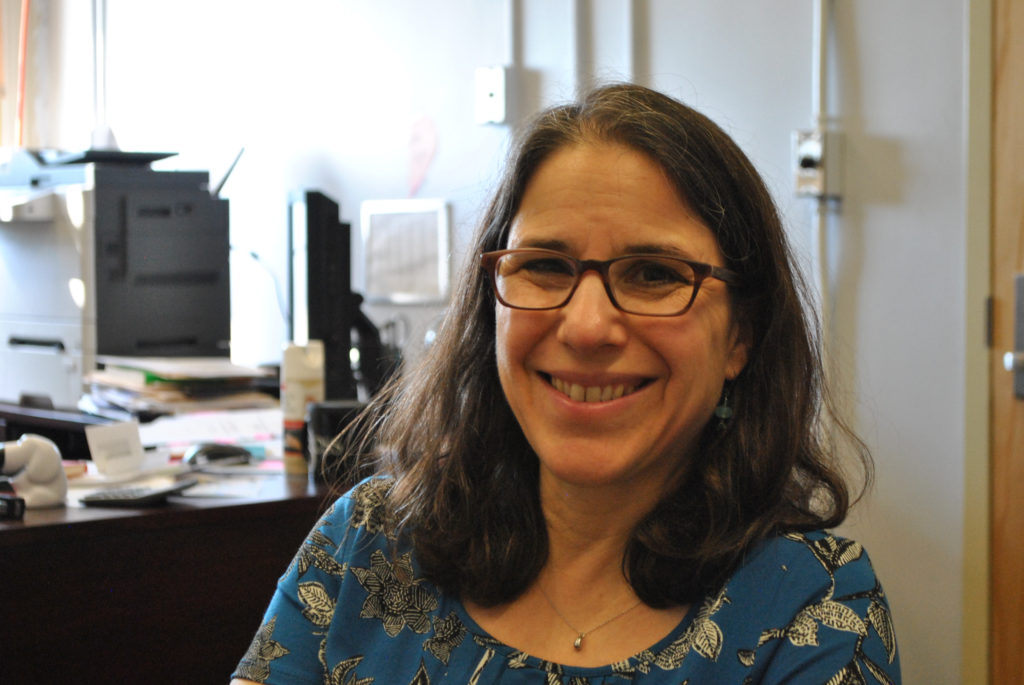 “It seems my January complaint against the separate and unequal sports teams was the last straw, mainly because it was the most demonstrable civil-rights violation,” said Bloomberg. “You had two sports programs inside the same building, and the demographics are clear. Far more students who are not-of-color in one and another that is predominantly students of color and the allocation of sports teams is unequal. The letter I sent did not ask for more teams, but for the programs to be combined. The kids in this building really ought to play together.”

In February members of the school district’s Office of Special Investigations began poking around the school. They have not informed Bloomberg what she is suspected of, but they have interrogated teachers and even drawn tears from students with questions about “communist activities” at Park Slope Collegiate. The children were interrogated without their parents’ informed consent.

“My daughter was angry when she found out she did not have to speak to the investigators,” the Collegiate parent told The Indy. “Her friend did not want to come to school the next day. They were not informed of their rights.” The parent requested anonymity for fear of retribution but said he is exploring legal action against the DOE.

A spokesperson for the department would not comment on the investigation but emphasized that staff are forbidden from politically indoctrinating students. Court documents filed by the city Law Department in response to Bloomberg’s suit state that the DOE received two complaints from unspecified individuals accusing Bloomberg, her husband, and two unnamed teachers at Park Slope Collegiate of holding political gatherings at the school on behalf of the Progressive Labor Party, a small, Maoist organization.

If the DOE’s line of inquiry seems antiquated, consider that New York City’s public schools are more segregated now than they were in 1954 when the Supreme Court struck down segregated schooling. Despite the growth of people of color populations in New York City, researchers at the University of California at Los Angeles’ Civil Rights Project noted in a 2014 study that 60 years after the Brown vs. the Board of Education decision, 93 percent of public schools in the Bronx, 71 percent in Brooklyn, 69 percent in Manhattan, and 59 percent in Queens were “intensely segregated.”

“This was a noted activity of the Board of Education, starting in the late 1940s when they went after hundreds of schoolteachers, accusing them of being communist,” Taylor told The Indy. “Four hundred of them were fired. It was an inquisition that was unmatched in the city. They had spies. They had informants.”

The aim of the Red Scare was to dismantle the Teachers Union, which had forged alliances with Black and Latino communities. Decimated by the purges, which claimed many of its brightest activists, the union was ultimately succeeded by the more conservative United Federation of Teachers. The UFT was for integration broadly, but against mandated integration in its schools — a position not dissimilar from that of current Chancellor Farina, who has said she wants “to see diversity in schools organically.”

UFT leadership opposed the dispersal of experienced teachers concentrated in white schools to underserved communities.  In 1964, it refused to support an NAACP-led boycott of city schools for desegregation. When the Black and Puerto Rican residents of Brownsville wrestled control over their neglected schools from the Board of Education in 1968, as part of a community-control pilot program, the UFT launched a 36-day citywide strike, on the grounds that the program allowed local school boards to fire and transfer teachers without regard for seniority.

The union eventually won, but the strike alienated educators and their natural allies, parents. That rift has survived in the decades since, creating an opening for charter-school advocates and anti-union school “reformers” to exploit, while leaving segregation intact.

The DOE has frequently been accused of using selective schools that weed out poor and working-class students of color to play to the desires of wealthy white parents.

The DOE shut down the original John Jay High School in 2004, citing poor academic performance. The long-underfunded and predominantly Black and Latino school was often referred to derogatorily as “Jungle Jay” by residents of the wealthy Park Slope neighborhood. It was a place where the DOE often sent its most troubled students, those with poor academic and disciplinary records.

The revamping at the school building was intended to offer Park Slope residents a place to send their offspring. Nevertheless, despite opening a series of specialty secondary schools on the site — schools for law and journalism, along with Park Slope Collegiate — until the arrival of Millennium, the student body at John Jay remained largely black and brown, while the surrounding area continued becoming almost as white as an Easter lily.

The DOE has frequently been accused of using selective schools that weed out poor and working-class students of color to play to the desires of wealthy white parents who want their children’s educations to match the value of what they pay in property taxes. Millennium fits that bill, and it has forced kids who aren’t spun from golden thread to move over, make room and do so in an orderly manner under the watchful eye of campus security.

“The school community that Jill is leading has repeatedly taken public and proud anti-racist positions, particularly on the question of integration, that are embarrassing to the DOE,” the Collegiate parent said. “Carmen Farina is trying to make us pay the price for proving that something can be done about integration. Her and [Mayor Bill] de Blasio have been saying, ‘Yeah, it’s a great idea but we don’t know what to do.’ Well we’ve shown that there are things you can do.”

It is not clear where the DOE’s investigation will lead, but Bloomberg could be sent to one of the department’s notorious reassignment centers — nicknamed “rubber rooms” — where educators wait, sometimes for years, for their cases to be resolved by either termination or reassignment.

“Teachers are asking me, ‘Are we allowed to tell our students what their civil rights are?’” said Bloomberg. “We’re trying to run a school and it’s on everybody’s mind. It’s disruptive, which to my mind, is the whole intent of the investigation.”

Members of the Movement of Rank-and-File Educators, a reform caucus within the UFT, and parents at Park Slope Collegiate have each formed committees in support of Bloomberg and the teachers under investigation. Plans for future protests outside DOE offices are underway.