We now live under a regime that sees catastrophic war moves as a handy distraction from its endless failures. The boundaries between the executive branch, corporations, finance and the military are fast losing substance. We stand by in horror as they play chicken with the world, from Syria to Russia to North Korea. A mass peace movement is urgently needed but still a long way away. Why?

There are a number of “common sense” reasons that have been floating around the left for decades. There is a long-held belief that ending the draft removed the life-or-death motivation that revived anti-interventionism beyond all expectations during the Vietnam war. Continued sympathy for the Democratic Party is also blamed for the lack of protest over the war moves of Bill Clinton and Barack Obama.

However, what is extraordinary about the U.S. peace movement is not that it receded, but that it emerged at all during the 1960s, affecting the national culture and posing lasting problems for both dominant parties. This mini-enlightenment marked a shift in national consensus from ardently pro-military to anti-intervention, with elements of pacifism and persistent anti-fascism that were defining features of the emerging counterculture. The shift was as much moral as political. This was both a strength (opening hearts and minds) and a weakness (reliance on mass action without organizing to directly pressure electeds on the issue).

The reasons for the decline of the movement are both complicated and concrete. Running for reelection in 1972, President Richard Nixon discovered that it was possible to avoid political consequences for ignoring mass protests. While a divided peace movement was able to nominate antiwar candidate George McGovern, the result was a record-breaking defeat for the Democrats. McGovern’s 22-point rout was seen as proof that elections offered no arena for the peace movement. It didn’t help that it drove the Democrats to swear off appearing “soft on national security.”

After the Indochina war, protest did not end — but it was not the peace movement that brought down Nixon, or for that matter George H.W. Bush, whose 1991 assault on Iraq was momentarily very popular. The movement couldn’t end the proxy wars in Central America or effectively respond to the conquest of tiny Grenada. It lacked the political organization to check Washington’s war machine.

Public protest, including mass civil disobedience, is essential but not enough. It can’t turn “Vietnam syndrome” (anti-intervention sentiment and suspicion of the Beltway/Pentagon elite) into a direct threat to elected officials’ power. The energy to challenge the tendency of imperialists to foster war has dwindled with the failure of successive attempts to head off U.S. invasions with street action and non-electoral pressure alone.

Crisis in the Middle East 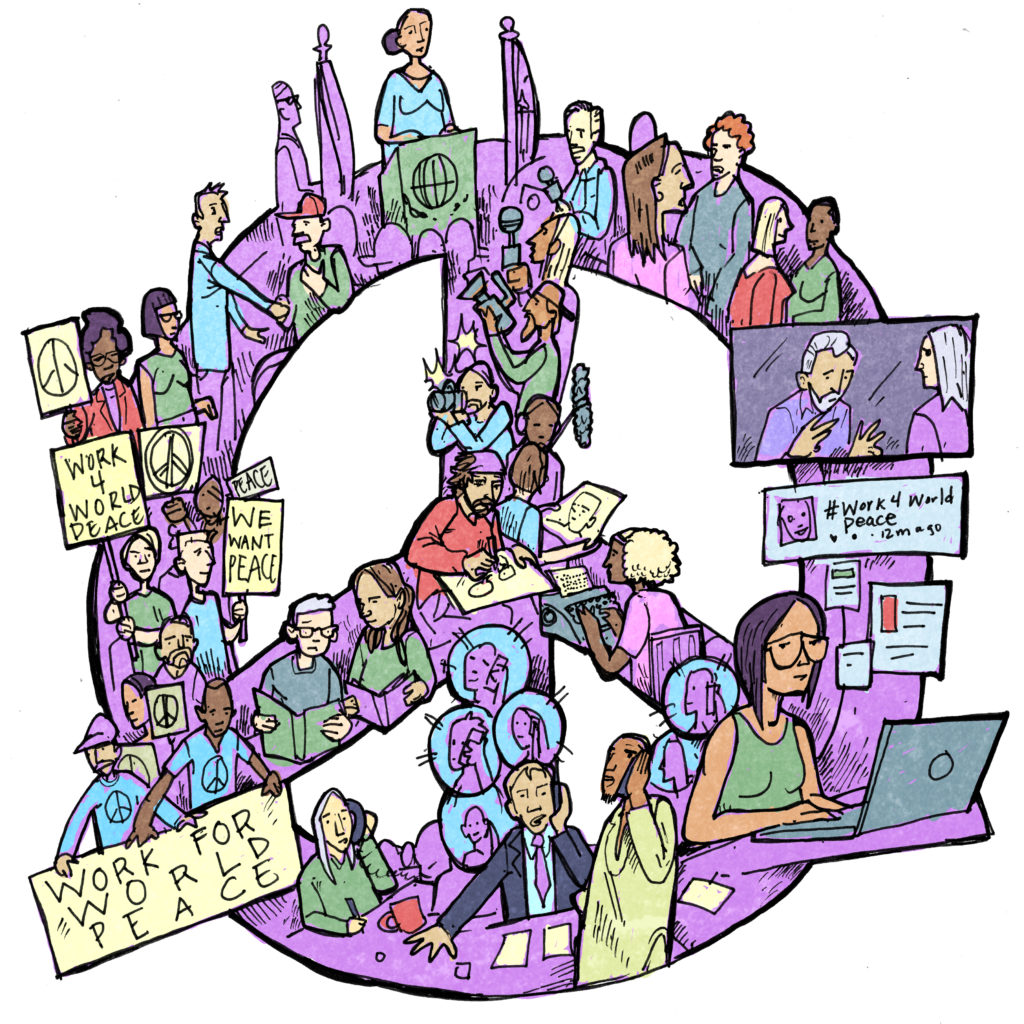 Another reason for the movement’s decline involves the move of the center of international crisis to the Mideast. Issues of war and peace having to do with Israel, the Arab world and the Gulf region have always polarized the peace movement. The inherent tensions have debilitated the movement for decades. They offer no simple choice of sides to oppose or support, just an increasingly complicated and dangerous series of quagmires.

The tensions have pulled hard among Jewish Americans, and among liberals as a sociopolitical sector. Jewish activists have always been at the heart of the peace movement, and its sympathy base has been disproportionately Jewish.

By and large, progressive-minded Jews are critical of Prime Minister Benjamin Netanyahu’s policies and are wary of the uses of Islamophobia in social control. But the stigma for Jewish Americans of being perceived as breaking trust with Israel can’t be overlooked. Support for Israel as posed by the pro-Netanyahu right has been hegemonic in Jewish institutions, due to several factors. Beyond religion and culture, Jewish society is framed by the memory of fascist extermination and discrimination, and fear of movements that target (or are perceived as targeting) Jews as a people.

The concern that opposing Israel’s role somehow gives aid and comfort to anti-Semites has directly undercut even the most confirmed doves. Militarists have cynically promoted Islamophobia to justify the ‘world cop’ stance from Pakistan to Western Sahara. The presumption of a permanent war between Islam and Israel is widespread, even though Israel and corrupt fundamentalist monarchies such as Saudi Arabia have found common cause against the Arab secular left and other foes. Thus Islamophobia influences liberals who identify with Israel, while it is most openly promoted by neoconservatives, fundamentalist “Christian Zionists” and America Firsters.

Here the racist logic of Islamophobia has taken root in a group that would reject it in other situations. The antiwar stance of liberals is compromised by Islamophobia when they view Islam as the biggest threat to peace. As the failure to move more decisively in electoral politics led to the decline of the peace movement, Islamophobia has led to its stagnation.

So where to? Rebuilding the peace movement requires a change in focus and working out a strategy based on appealing to existing mass antiwar sentiments, and posing peace as a political problem in the fight against the Trump regime.

A recurring problem has been viewing U.S. military policy from a Cold War perspective. The postwar balance of forces was transformed by the collapse of the Soviet camp and the economic rise of China. The unipolar dominance of the United States is in decline, and with few left anti-imperialist forces to look to, moral outrage at U.S. interventions has devolved into ‘anti-patriotism.’ Viewing every world development as a reflection of U.S. imperial ambitions makes little sense to a public plagued with financial insecurity and xenophobia. Clinton and Obama were partly successful in using “humanitarian intervention” to justify war moves. Bush I, Bush II and now Trump, preferred the “Hulk smash” approach — because they can.

Militarism Is The Problem

So the anti-intervention focus has proven ineffectual. The problem is less military intervention as a choice, than militarism itself. Non-intervention harks back to George Washington’s opposition to foreign entanglements, and recurred in pre-World War II isolationism and the paleoconservatism first teased, then dropped by Trump. Anti-militarism characterized opposition to World War I, the nuclear disarmament movement and the anti-draft movement. It speaks from the moral objection to war, and political opposition to the military-industrial complex.

Peace Action, the biggest peace group, has tried to popularize transferring funds from war to human services. War Resisters League has helped counsel high schoolers on why they shouldn’t enlist. Anti-militarism is not an easy sell even if working class people are open to it. It has to be hammered home with electeds and promoted through electoral campaigns for explicitly pro-peace candidates.

The peace movement is where realism about U.S. military madness lives. The movement is the main challenger to nationalism and xenophobia, and the main force for internationalism in an interconnected world. It abides in the best political instincts in every other progressive social movement. Restoring it is a collective responsibility for the entire range of forces shocked into motion by the 2016 election.