Activists seeking to voice anger at the president on his native turf have found a convenient loophole for doing so.

In a 1979 agreement, Donald Trump, then a zealous playboy from Queens hoping to make his mark on the Manhattan skyline, struck a deal with the City of  New York. He was granted a variance to build his signature tower 20 floors higher than the city’s zoning ordinance permitted. In exchange, Trump agreed to open up sections of his property to the public; a first-floor atrium, two upper-level gardens and a 22-foot-long bench in the building’s lobby.

The 200,000-square-feet worth of extra condo and office space the city allowed the president-to-be to build currently accounts for the bulk of the $530 million value of Trump’s remaining stake in the building. Meanwhile, the public gardens, located on the fourth and fifth floors of the tower, are frequently closed for apparently arbitrarily reasons. But while the Trump Organization may be inclined to neglect its end of the bargain, activists staging an ongoing series of protests, teach-ins and speak-outs on the fifth-floor garden at Trump Tower are not going to let the president off that easily.

The irony that Trump employees attempted to squash a demonstration in support of freedom of expression was not lost on the protesters.

Their latest incursion onto the Trump property on June 14 was led by performance artists irked at White House plans to sever funding for arts and humanities grants. Previous gatherings at Trump Tower, which started up periodically in February under the rubric #TakeTrumpTower, have dealt with the issue of climate change (Trump has called it a Chinese hoax and withdrawn the United States from the Paris climate accords) and with affordable housing (Trump housing secretary Ben Carson has said he doesn’t want the poor to be too comfortable). 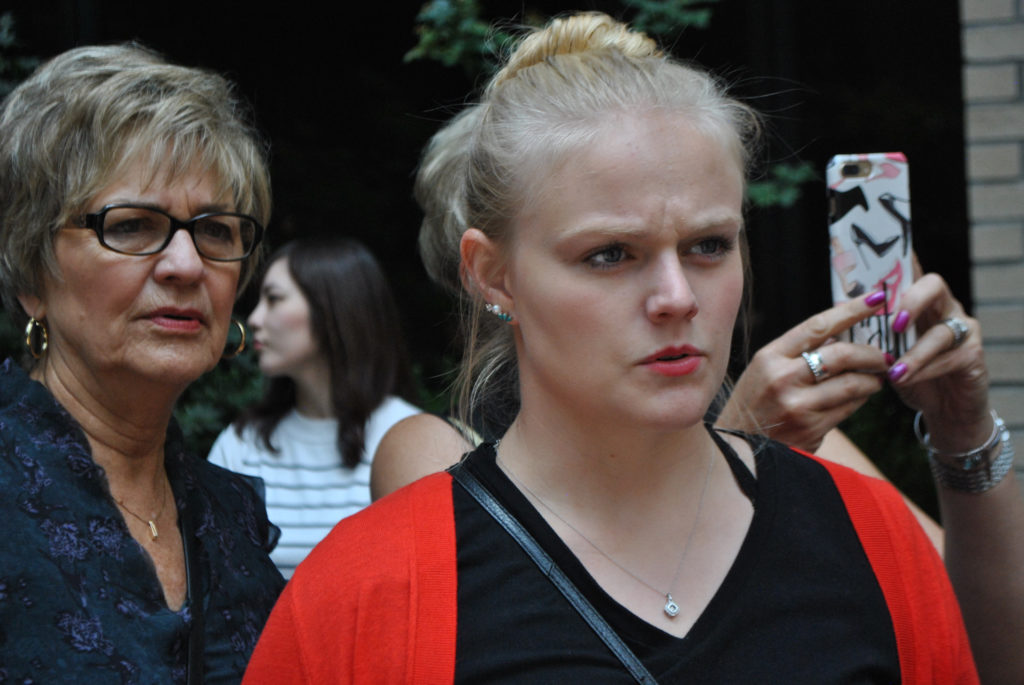 Tourists at Trump Tower look on, confused as to why anyone would protest the president. Credit: Peter Rugh.

In one instance, demonstrators were told the garden was closed because there was snow in the garden and, last month, the Fire Department was called to shut down the protests, ostensibly over safety concerns. Fire Department officials allowed the demonstration to proceed.

On Wednesday, protesters who arrived at the garden at about 10:30 a.m. found the doors locked again, this time, they were told, for window cleaning.

“The law is the garden must be open from 8 a.m. to 10 p.m.,” said Wylie Stecklow, a civil liberties attorney providing legal support to the protesters. “They can clean the windows whenever they want during off hours.”

An audit this year of the private-public spaces by the city’s comptroller, Scott Stringer found “more than half (182 of the 333) failed to provide required public amenities and “cases where the general public was excluded from POPS because restaurants were allowed to use supposedly public spaces for restaurant seating and had cordoned off portions of the POPS to restrict public use. We also found cases where public access was otherwise impermissibly limited or denied entirely.”

Within the past four years, the Department of Buildings, which enforces the agreements, has inspected just 17 percent of the spaces, according to Stringer’s audit.

“After Occupy Wall Street highlighted the privately-owned public space issue in New York,” Stecklow said, “a lot of real estate owners got together and created new signage that violates the law; that is not compliant with the law that gave them the benefit of taller buildings.”

On Wednesday, after Stecklow spoke with Trump Organization security, demonstrators were granted access to the fifth-floor garden where they staged a mock birthday party for Trump, voicing contempt for the president’s budgetary proposals, which include eliminating the National Endowments for the Arts (NEA) and Humanities (NEH).

Both programs, with combined yearly budgets of approximately $300 million, compose a minuscule fraction of the government’s $1.1 trillion annual spending. But, along with cuts to nearly every aspect of the federal government outside the Departments of Defense and Homeland Security and the Veterans Affairs Administration, Trump has proposed shutting the grant programs down.

“Trump does not seem to get that our country will be judged a hundred years from now based on the culture that it has produced,” said performance artist Martha Wilson who, outfitted in an orange wig and pinstriped suit to portray the president, broke character to speak with The Indy. “He figures that by cutting off the institutions he’s going to cut off the expression,” she said. “What’s going to happen is what happened during the culture war of the 80s. Artists are just going to go outside and find more people to join them.” 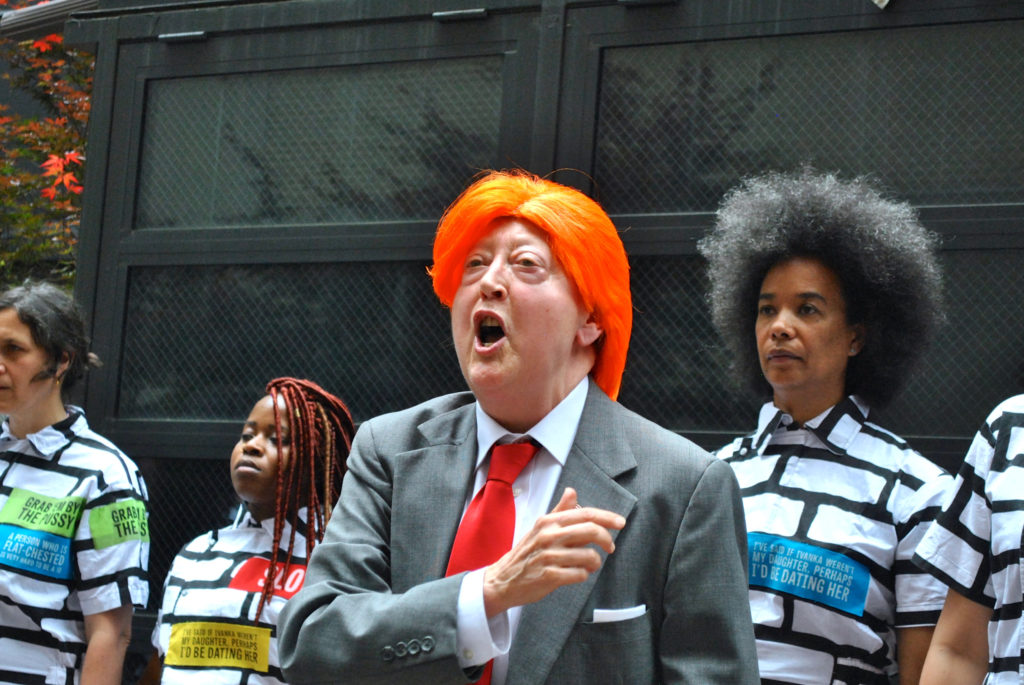 Nonetheless, Kyle Dacuyan, a poet and Senior Manager of Literary Outreach and Activism at PEN America, said he worries about what the cuts mean to minority artists and writers.

“What federal arts funding does is uplift artists from marginalized communities and allows them to participate in our national artistic conversation,” he told The Indy. “Having these cuts happen at a federal level threatens to significantly limit who is able to participate in art making and artistic expression.”

The irony that Trump employees had attempted to squash a demonstration in support of freedom of expression was not lost on the demonstrators. “Protest is a form of expression,” observed Dacuyan.

And #TakeTrumpTower organizers say more protests are coming. In the meantime, they are planning events to keep Trump’s privately-owned public space public. “Resistance as Restoration” yoga sessions will be taking place at the tower this summer, as well as a weekly reading series, “Learning as Protest.”

“Down here at the grassroots where culture lives is where change has to happen,” said Robin Wilson, who performs under the name Dragonfly with Reverend Billy and the Stop Shopping Choir, one of the groups behind #TakeTrumpTower. Changing laws and policies is one thing, said Wilson, whether or not they are enforced is another. After all, Trump persistently flaunts the law. Culture, however, can change “people’s hearts and minds.”

Anytime somebody comes to Trump Tower and the garden is closed during public hours they should call 3-11, the city’s administrative hotline, and file a complaint, civil liberties attorney Wylie Stecklow said.

“Enough complaints and there’ll be an investigation,” he added. “It’s up to activists to ensure [property owners like Trump] are complying with the law.”