“Labour won its seats not by moving to the right, not by being conciliatory, but by standing up to the ruling class,” Sanders said, speaking from the podium at the 2017 People’s Summit in Chicago.

His remarks follow a triumphant showing at the polls for Labour in Thursday’s general election.

The results of the vote could offer an eventual path to the Prime Ministership for Corbyn, who, like Sanders, has drawn mass support for his working-class politics while fighting against steep opposition from within his own party. Corbyn’s success appears to confirm Sanders was onto something.

In his remarks on Saturday, Sanders emphasized how proposals seen as unattainable prior to his presidential candidacy — a $15 an hour minimum wage, Medicare for all, a trillion dollar infrastructure investment — are no longer considered radical.

An independent who caucuses with the Democrats and ran in the primary contest against the party’s eventual nominee, Hillary Clinton, Sanders was unsparing in his criticism of the Democrats’ political program; its promotion of free trade, wars abroad and watered down health, environmental and economic policies that have benefited big donors at the expense of the poor and working people.

Sanders noted the Democrats’ minority status in Congress and their dwindling presence in statehouses across the country. The party “needs to open its doors to working people and young people fighting for economic justice,” he said. “It must finally understand which side it is on and it can’t be on the side of Wall Street, the fossil fuel companies or big pharmaceutical companies.”

Sanders’ Political Revolution, as he and his supporters call it, has gained a modest amount of ground recently. The U.K. Guardian’s Adam Gabbatt observes:

Khalid Kamau, a self-identified democratic socialist, became one of the first Black Lives Matter activists to hold elected office when he won a seat on Atlanta’s South Fulton city council in April,” “New York state assemblywoman and former Sanders delegate Christine Pellegrino became the first ever Democrat to represent New York’s ninth district in May, while progressive Larry Krasner won the Democratic primary for Philadelphia’s district attorney against a slew of establishment candidates.

Still, backers of the Political Revolution who want to go from protesting to governing have a long journey ahead. Not that there isn’t room for optimism — few predicted either Sanders or Corbyn would get as far as they did — but most of the Bernitsas lack the experience and electoral record Sanders’ garnered over his decades-long career in the Senate, Congress and as mayor of Burlington, Vermont. They gathered for the national People’s Summit in Chicago to strategize and build connections with one another that they hope will strengthen their movement and lead to an eventual rupture with the political status quo, as is currently underway across the Atlantic.

Members of the Democratic establishment have plans of their own. 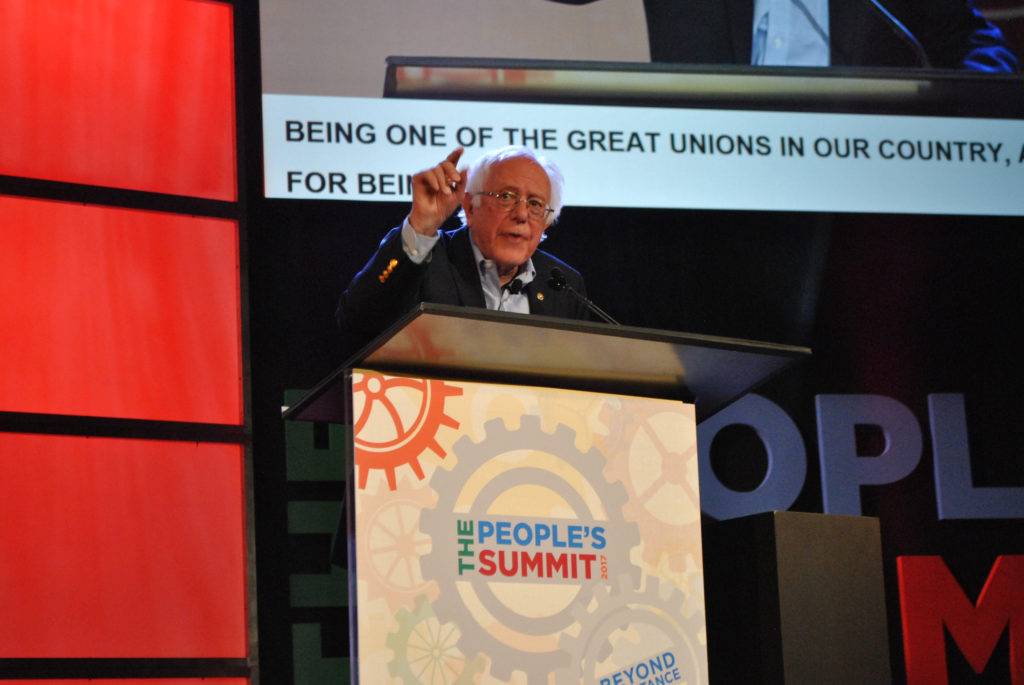 According to a report in the New York Times following the summt, Democratic leadership plan on fielding a centrist cast of candidates in 2018 elections, in direct opposition to the desires of their grassroots base:

[T]he party’s elected leaders, and many of its candidates, are far more dispassionate, sharing a cold-eyed recognition of the need to scrounge for votes in forbidding precincts. They have taken as a model the Democratic campaign of 2006, when the party won control of Congress in part by competing for conservative corners of the country and recruiting challengers who broke with liberal orthodoxy.

As a model of what to expect in 2018, the Times cites Jon Ossoff’s campaign in the special election underway in Georgia. But much of America is not “a conservative-leaning patchwork of office plazas and upscale malls,” where voters adorn themselves in “golf shirts and designer eyewear,” as the Times describes the Sixth Congressional District. A crop new crop of Clinton cutouts risks further alienating Rust Belt voters who played a decisive role in the 2016 elections and do not see their concerns reflected in the party. Like Sanders, Ossoff has received millions in small donations, but this support appears to stem more from Ossoff’s slogan, “Make Trump Mad,” which he has since dropped, than from any substantive backing for his policy proposals.

“The Democratic Party is with Bernie, but the Democratic institution is not,” Nick Brana, a former outreach coordinator for the Sanders campaign, told The Indypendent. Brana, along with a small but vocal minority at the People’s Summit, wants to “Draft Bernie” into a “People’s Party.”

“He could take his following, he could bring over tens of millions of independents that he’s extremely popular with, and that could become the new left party in the United States,” said Brana.

The Draft Bernie campaign appears to have received at least a passive endorsement from RoseAnn DeMoro, head of National Nurses United, a union that played a leading role in organizing the People’s Summit. “I want to thank all the Draft Bernie people here,” DeMoro said on Saturday, standing on the stage next to Sanders and his wife Jane. “I’m with you.”

“I always say, ‘Heroes aren’t made, they’re cornered,’” she added.

A split with the Democrats would mark a sharp departure from Sanders’ strategy and that of the Bernistas. They’ve attempted to shoehorn a progressive program into the party, even as its leaders have progressively drifted to the right. During breakout groups at the summit on Sunday, activists from across the country compared notes on efforts to infiltrate state and local party committees and support nascent left-wing politicians.

At one point during Sanders’ address on Saturday the crowd began chanting, “Bernie, Bernie!”

This article was updated on Monday, June 12 to include new information.