As I write this, you can read about Caitlyn Jenner’s gender reassignment surgery; a trans Survivor star, Zeke Smith, being outed by a fellow contestant (and that contestant being fired from his job in real estate); and a non-binary actor, Asia Kate Dillon, protesting that the Emmys separate awards by gender. Trans and non-binary people — their struggles and wins — are more in the news than ever before, as an exciting new revolution picks up steam.

It’s a revolution that has been long in coming.

The Canadian Broadcasting Corporation tells us that in 220 AD, the male Roman Emperor Elagabalus was supposedly requesting a vagina. There is the concept of “two spirit,” which Slate describes as “an ancient belief in indigenous American culture that some people possess both male and female qualities in their spirit.” South Asia has famously had a third gender community called hijra for hundreds of years.

And then there’s Japan. “A Third Gender,” the Japan Society’s eye-opening, monumental, oddly topical and almost endlessly intriguing exhibit, shows how surprisingly common gender fluidity was during the Edo period (1603-1868). With over 65 works of art, “A Third Gender” is more about uncovering the hidden history of the wakashu — androgynous teenage boys who seem to have constituted a third gender — than about appreciating the period’s individual artists, most of whom, if this exhibition is any indication, followed a singular style. It’s tempting to say the wakashu were like today’s trans or gender-fluid youth, but becoming one was a mandated cultural coming-of-age ritual, not a personal choice.

When fully clothed, the wakashu were practically indistinguishable from women. You could tell you were looking at one if you saw a tiny shaved spot on the top of his head — a spot that allowed him to keep his sidelocks and made his forelocks more prominent. As boys became men, their heads would be further shaven in another coming-of-age ritual, genpuku.

“A Third Gender” wisely uses the wakashu as a jumping-off point to explore the physical characteristics and clothing of other members of Edo society. Nishikawa Sukenobu’s Thousand-Year Mountain book shows a woman who had shaved eyebrows, denoting she was married. A sash (called an obi) tied at her front proves she is wealthy. Another woman, likely her daughter, is wearing a robe called a furisode that was a traditional outfit of unmarried women, as well as prostitutes and wakashu. The coded visual language on display here is not all that different from the symbols queer people have used, such as the rainbow flag, “dyke” haircuts, or, say, the clothes, payos (earlocks) and wigs of Hasidic Jews. Hair and clothes can help people find one another and allow different groups to express their beliefs.

One belief Edo people held was that male adolescents should not be prohibited from being sexual — with men and women. In a scroll from the early 1700s called Fan Seller, by Moroyasu (only one name given), the figure wears a see-through blue kimono and places a fan over the genital area while in a slightly sexy pose. Whether this person was an actual wakashu or not is unknown, but the picture is a solid representation of the teasing nature a wakashu could possess. 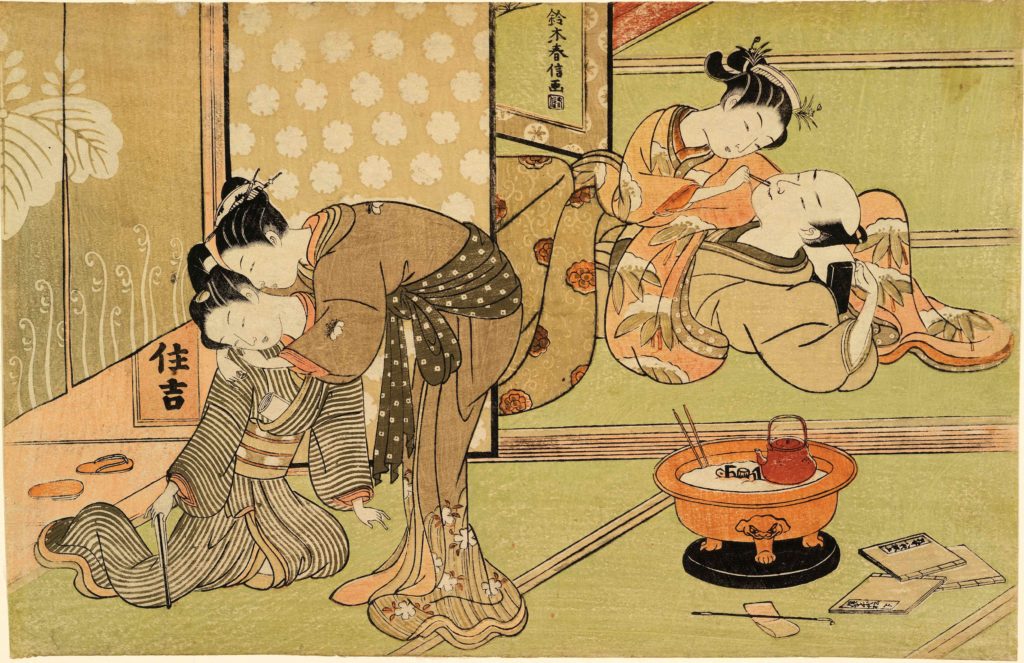 There is even more awkwardness in Suzuki Harunobu’s Two Couples in a Brothel, a print showing a wakashu who doesn’t seem all that on board with sleeping with a prostitute. The other man, also being attended to by a prostitute and in full sight of the wakashu, might be his father.

Prostitution was allowed to flourish in licensed pleasure districts. A print by Okumura Masanobu, Original Perspective Picture of the Great Gateway and Naka-no-cho in the Shin Yoshi-wara, features a prostitute who appears to be quite respected — so different from how we treat and think of our sex workers these days. 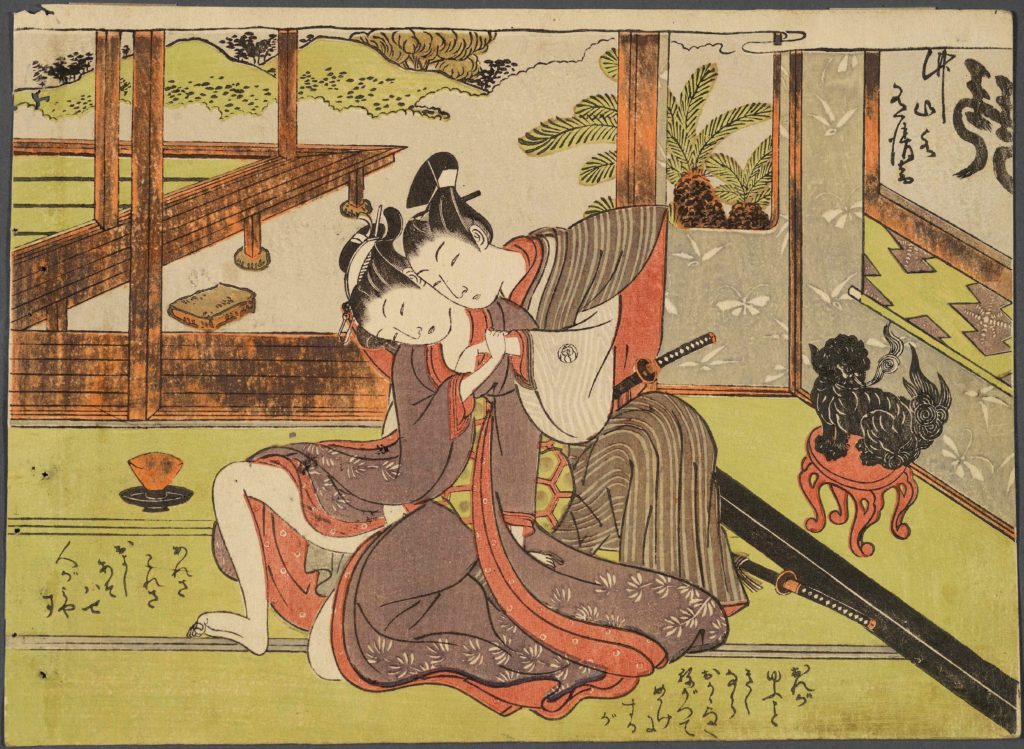 Mitate-e is a genre of art that showcases themes from religion or classic literature using contemporary figures. It can feature women or wakashu in roles that would have been taken by men, “essentially transgendering the tradition,” as the exhibition puts it. It’s kind of like what they were trying to do in that Ghostbusters remake, I guess. I didn’t find it or the kabuki section as interesting as the pictures of wakashu in normal life. The appeal of this exhibit lies in learning how these unique people lived. Reality — or at least the depiction of it — trumps fiction this time around.

The writing was on the wall for the wakashu by the mid-19th century, as American influence and Victorian-era notions of gender and sexuality infiltrated. But the spirit that gave us wakashu still burns a little bright: In March, the city of Iruma elected an out trans man, 25-year-old Tomoya Hosoda, to be a city councilor. According to Stonewall Japan, he was the first out LGBTQ candidate to win office in the history of Saitama prefecture, and the second transgender politician to be elected in Japan, after Kamikawa Aya in 2003.