The most devastating insight in Jonathan Allen and Amie Parnes’ new book comes on the second page of the introduction: “Clintonworld sources started telling us in 2015 that Hillary was still struggling to articulate her motivation for seeking the presidency.” She had no broad mission or vision, just a mix of specific, incremental policy items and the belief that it was “her turn” — both to break the glass ceiling that kept women out of the White House and as the reward she deserved to cap her political career.

Shattered is a classic work of insider journalism. Granted intimate access to the Clinton campaign in exchange for not using the story until after the election, the authors reveal loads of details about its six competing fiefdoms, the personalities who led them, the go-betweens that connected them and their constant palace intrigues and infighting over power and strategy. If you want an almost hour-by-hour account of the campaign’s floundering after then-FBI director James Comey announced 11 days before the election that he was reopening a probe into her emails, it’s here.

Two insider journalists tell the story of a doomed campaign.

If there’s a villain, it’s campaign manager Robby Mook, whose obsession with data analytics caused him to dismiss warnings from field workers, local politicians and Bill Clinton that Hillary was in trouble in Michigan, Wisconsin, Pennsylvania and Florida. The data showed that wasn’t so, Mook insisted. He kept her from campaigning in rural areas, arguing that it was a waste of time because there were few of her voters there and believed yard signs, bumper stickers and door-to-door canvassing also weren’t worth the money and effort.

All that isn’t Mook’s fault alone. The Democrats’ centrist wing lacks a coherent message because they’ve abandoned the party’s New Deal legacy — for example, Franklin D. Roosevelt created the nation’s first public-housing program; Bill Clinton froze it 60 years later — and with it, any direct, passionate appeal to working people’s interests. Instead, they believe that demographics will ensure their destiny: That because they are not bigoted philistines like the Republicans, they can carry the nation with a coalition of educated upper-middle-class liberals, women, people of color and gays and lesbians — and when enough Latinos become voters, Arizona and even Texas will be theirs.

If you take away Clinton World’s intertwinement with Wall Street and Silicon Valley, this oddly echoes an idea prevalent in the early-1970s student left: patching together a radical majority without white working-class men. That idea emerged after the AFL-CIO supported the Vietnam War and construction workers attacked antiwar protesters in Lower Manhattan in 1970; it also coincided with the beginning of identity politics as a significant force on the left. But it ignores both history and current reality. The 1960s and early ’70s were actually an era of serious labor militancy. Millions of public-sector employees, from teachers to hospital cafeteria workers, joined unions for the first time and 2.5 million workers went on strike in both 1970 and 1971 — more than in any year except one since World War II. If you hear the phrase “working class” and think of a beergut white-male redneck — as many leftists and Clinton Democrats do — you need to go see how many men are walking a health-care workers’ picket line in Queens, see how many white people are at recent protests by airline baggage handlers and cabin cleaners or talk to an actual blue-collar white guy who’s not a dumb bigot. 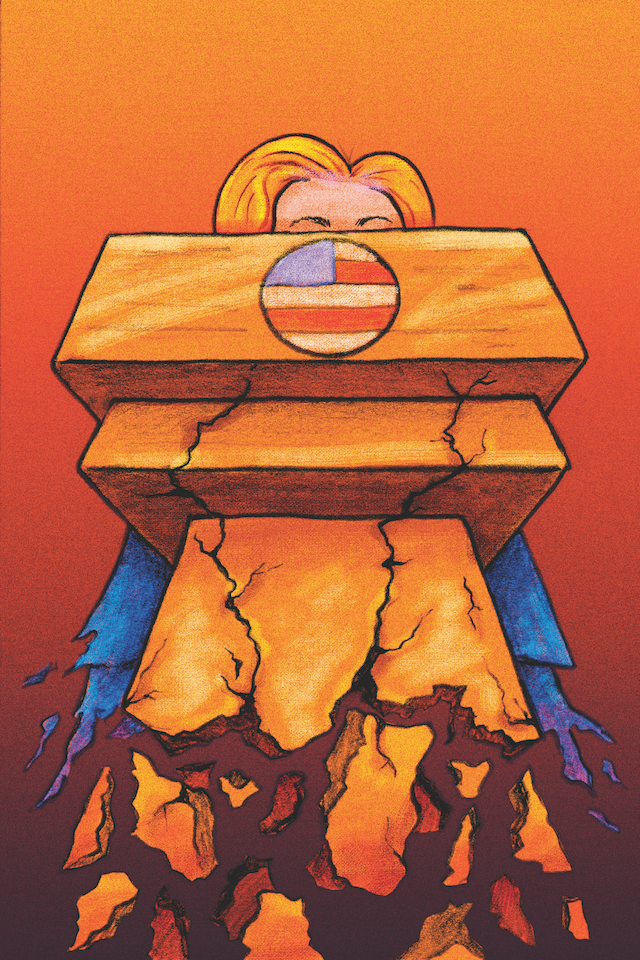 Clinton, though she tried to associate herself with the legacy of Franklin and Eleanor Roosevelt by opening her campaign with a photo-op speech at their memorial on Roosevelt Island, is a NAFTA Democrat not a New Deal Democrat. Bernie Sanders’ vision of a revived New Deal, of single-payer health care as the natural successor to Social Security, was what inspired so many people to support him. Clinton’s campaign, isolated in its professional-class cocoon, couldn’t comprehend the anger of middle-aged people knocked out of the middle class by deindustrialization, globalization, the recession and the relentless pursuit of market efficiency, or the bitterness of the young with no hope of ever reaching middle-class comfort.

Shattered is at its best in depicting the organizational failure that prevented the campaign from realizing that Clinton was in serious trouble in the Rust Belt states they thought were a “blue wall” and how it then decided that last-minute campaigning there would be seen as a sign of panic. Allen and Parnes depict a scrum of competing cliques, in which those most loyal to Clinton knew little about running a campaign, those with practical experience hadn’t gained her trust and no one who had access wanted to tell the boss bad news — in part because they didn’t want to jeopardize their prospects of getting a job in her administration.

Getting access to these details and workings is the great virtue of insider journalism. But Shattered also suffers from its flaws. One is focusing on the ups and downs of the “narrative of the day,” at the expense of looking at deeper historical trends — or going outside the campaign to talk to actual voters. Another is adopting the worldview of your sources. The authors speak like Beltway establishment Democrats, dismissing Bernie Sanders as an impractical fringe-leftist dreamer. They describe his declaration in an October 2015 debate that “the American people are sick and tired of hearing about your damn emails” as wandering into Clinton’s well-laid “trap” — rejecting the idea that he simply wanted to fight fairly, on more important issues.

In the end, the authors largely accept the Clinton campaign’s explanation of why she lost, despite winning the popular vote by almost 3 million: “Comey, the KGB, and the KKK” — the last-minute investigation of her emails, Russian interference, and Trump supporters’ racism and bigotry. They also follow the conventional wisdom that Trump won because of working-class whites. That is true as far as his margin of victory in key Rust Belt states, but it ignores that most Trump supporters were more affluent conventional Republicans and that a lot of black, Latino and young voters simply stayed home or opted for third-party candidates.

The tragic result is that we now have a know-nothing President who has delegated his administration’s policies to the economic pussy-grabbers of Wall Street, unleashing them to pursue their wet dreams. Believing that Donald Trump would actually help working people is as stupid as using nitroglycerin suppositories to cure hemorrhoids (an apt simile for the Republicans’ Obamacare-repeal bills). Enough people in the right states were stupid or desperate enough to believe that he would.

“It used to be cars were made in Flint and you couldn’t drink the water in Mexico. Now, the cars are made in Mexico and you can’t drink the water in Flint,” Trump said while campaigning in the Midwest in September. Yes, there is no way Trump’s economic and environmental policies would do anything other than make that situation far worse and he’d happily condemn the people of Mexico to a life of poverty and toxic waste. But he had a point. Clinton never countered it.