The Indypendent
Menu
A Free Paper for Free People
Gregg Henry (center) and the company in The Public Theater’s free Shakespeare in the Park production of Julius Caesar, directed by Oskar Eustis, running at the Delacorte Theater in Central Park through June 18. Credit: Joan Marcus.

A tall man in a business suit with a tuft of blond hair whirls around the stage, surrounded by attackers. He feebly tries to stop his inevitable, gruesome end. His white shirt grows redder and redder, as he is repeatedly knifed by those he thought he could trust. The tyrant lies dead on the ground while the conspiring senators celebrate the assassination before civil unrest promptly proves their coup misguided.

This moment from the Public Theatre’s production of William Shakespeare’s Julius Caesar, in which Caesar is treated as a Donald Trump doppelganger, has generated quite a controversy over the past few days. Right-wing media have criticized it for condoning violence by depicting the assassination of Trump, comparing it to the recent incident in which Kathy Griffin held up a mock severed head of the president and calling the show tasteless in light of the recent shooting during a House Republican baseball practice in Virginia.

“I wonder how much of this ‘art’ is funded by taxpayers?” Donald Trump Jr., wondered on Twitter. “Serious question, when does ‘art’ become political speech & does that change things?”

The National Endowment of the Arts, which President Trump plans on eliminating in his proposed budget, did not provide funding to the play but Delta Airlines and Bank of America have withdrawn their sponsorship.

To get tickets for the Public’s annual Shakespeare performances in Central Park, fans spend hours in line, often arriving before sunrise to wait for the ticket office to open at noon. The Indypendent’s Cole Boyd spoke to some Shakespeare fans lined up for a chance to see the performance.

‘Making statements about what is going on in society — that’s part of what theater and art does.’

We’ll need to see the play to understand what the controversy is about. Making statements about what is going on in society — that’s part of what theater and art does. It brings out those hard questions that people should be looking at in a safe way.

I’ll tell you one thing, that shooter in Virginia wasn’t a Shakespeare fan. It’s a very big leap to associate the shooting with what happens here.

The shooting in Virginia is the logical corollary of all the anger and illegitimate hatred there is against the president and Republicans in general. People need to take a look at themselves and realize what’s been happening since Nov. 9 is nothing short of an attempt to question the legitimacy of an election.

In tenth grade, I played Cassius. Caesar is the hero as I remember it. 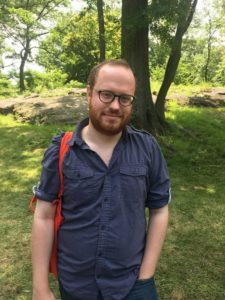 It’s hard for me to say because I haven’t seen it yet, but I think that the director of the play [Oskar Eustis] has been pretty clear: Controversy can be good for art, can be good for politics. What happened near D.C. was obviously tragic and horrific but I think it’s worth distinguishing what’s represented on the stage and what individuals do in real life.

I can’t wait to see the orange tyrant being slaughtered. The issues people had two millennia ago are no different than now: government versus people. I think Bank of America is small-minded and foolish, and I should pull my funds out of their bank.

Here’s part of the Public Theatre’s response to the controversy from a statement the company issued earlier this week:

We recognize that our interpretation of the play has provoked heated discussion; audiences, sponsors and supporters have expressed varying viewpoints and opinions. Such discussion is exactly the goal of our civically-engaged theater; this discourse is the basis of a healthy democracy. Our production of Julius Caesar in no way advocates violence towards anyone. Shakespeare’s play and our production make the opposite point: those who attempt to defend democracy by undemocratic means pay a terrible price and destroy the very thing they are fighting to save.