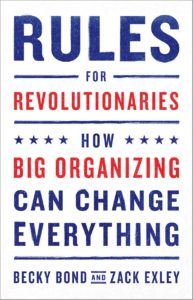 Becky Bond and Zack Exley’s Rules for Revolutionaries: How Big Organizing Can Change Everything is part of a recent wave of books that seeks to draw organizing lessons from Occupy Wall Street, the Bernie Sanders campaign, and related movements.

Rules for Revolutionaries refers to Saul Alinsky’s 1971 organizing guide, Rules for Radicals, in its title, perhaps because so few books on this topic have been published in the decades since. However, Bond and Exley, who led a major volunteer-focused effort in the Sanders campaign, have a very different perspective. Alinsky concentrated on organizing communities, drawing demands from the grassroots to make on the local power structure. Bond and Exley advocate insurgent campaigns (electoral and otherwise) with centralized planning and leadership, but designed to distribute responsibility to an ever-growing army of volunteers. This is how they understand their work on the Sanders campaign, and they bring a proselytizing zeal to arguing for its general value.

In Sanders’ campaign for the Democratic presidential nomination, Bond and Exley built up a national network of volunteers to call voters in states where the Vermont senator was running in the primary. If you used the “Bernie Dialer,” which made it easy to make calls (and actually reach people) at home, you encountered their work. They describe the challenges to pulling the Bernie Dialer together at length. The other major innovation they associate themselves with is “barnstorming,” large meetings where volunteers were encouraged to host or sign up for phone-banking, since even with the Bernie Dialer, people were likely to make more calls if working side by side with other volunteers. Response rates at those events were very high, and eventually, volunteers themselves would facilitate them. Expanding rapidly by turning over responsibility to volunteers, and armed with the Dialer, the long-shot campaign was able to reach millions of primary voters and come closer than virtually everyone expected to winning the nomination. On the other hand, Sanders lost to Hillary Clinton, something Bond and Exley gloss over.

So what did Bond and Exley learn from this experience? They have little patience for the consensus decision-making process so central to Occupy Wall Street and many other movements. Indeed, they have little interest in the question of movement democracy in general. Instead, they argue for simply launching projects, and seeing what flies. If you are able to find a base and grow rapidly, you are probably doing something important. The best technological tools, like the Bernie Dialer, should be embedded in organizing strategies. But talking to people on the telephone should not be underrated. Problems should be dealt with as they arise, rather than appear as daunting barriers to entry. Any paid staff involved should be prepared to empower volunteers, rather than monopolize information and control the process. However, good management is also important, including a willingness to fire those who are not up to the job. Funding should be based on small grassroots donations, rather than large grants from foundations that may not ultimately share your politics. The “tyranny of the annoying,” people (frequently white men) who want to use precious time spouting their political beefs rather than getting to work, should not be tolerated and the annoying should be pushed out promptly if they don’t behave. Volunteers should be given clear tasks that can be repeated and that facilitate movement growth.

The volunteer army built up during the Sanders campaign was indeed impressive, and Bond and Exley’s enthusiasm about explaining what worked can be infectious. I presumed at the time that the Bernie Dialer was simply a variation on tools readily used by most campaigns, but their descriptions of the challenges of getting it going and its implications are compelling. It may well be that with the millions of people who seem to have been inspired to political action by outrage at Donald Trump, more campaigns involving centralized leadership and a rapidly growing base of volunteers will be launched.

However, I am skeptical that this is THE strategy to be followed by “revolutionaries.” As noted above, Bond and Exley don’t expend much energy trying to understand why Sanders lost, although a couple of “rules” allude to factors. “Fighting Racism Must Be at the Core of the Message to Everyone,” they state, and note that Sanders didn’t really do this. On the other hand, this chapter, unlike many others, has few specifics about their own work, making it feel a little perfunctory. “Get Ready for the Counterrevolution (to include your friends)” basically vents anger at fellow progressives who stuck with Clinton, which they ascribe to things like an excess of caution. These two rules allude to some of the racial and social movement boundaries that the Sanders campaign failed to supersede, without making a compelling case that Bond and Exley’s model would overcome them if simply pursued more intensely.

There is also a broader question of the meaning of “revolution” or “revolutionary.” If we are talking about not only a better political leadership and policies but also a redistribution of power away from centers of wealth and toward the grass roots, that’s different from creating a volunteer army to call voters in primary states. It would need durable organizing in schools, neighborhoods and workplaces, to build social networks that could be mobilized to exert power and to transmit information and demands to a center where national strategies could be developed. Revolutionary organizing would combine many of the big organizing strategies outlined in this book with “small organizing” that builds programs from the grassroots up.

Nevertheless, this should not obscure that the approach outlined in this book is likely to be a main way of organizing the anger brought to the surface by Occupy Wall Street, Black Lives Matter, and Sanders to achieve political change.