After receiving public testimony this month, the New York City Rent Guidelines Board (RGB) will finalize plans to raise rents on June 27. Last month, the board announced a 1 to 3 percent rent increase on one-year leases and 2 to 4 percent increase on two-year leases, sparking an outcry among many of the city’s 950,000 rent-regulated tenants.

On Thursday June 8, board members got an earful from several dozen uptown tenants who turned out for a public hearing on the proposed increases. For nearly three hours, tenants and their supporters attempted to humanize their position citing stagnant wages and fixed incomes, as well as the rising cost of healthcare, education, and food. Some broke into tears.

“If people’s wages don’t go up, how you gonna raise their rent?” testified Calvine Swan, a formerly homeless man who volunteers with the group Picture the Homeless.  “I don’t understand it.”

The nine-member RGB is appointed by the mayor with two seats allocated to tenant advocates, two to landlord representatives and five to “independent” board members. During Thursday’s hearing at a Harlem community center, the RGB members resembled a group of bored grade school students waiting to be let out of math class.

The board has imposed a rent freeze for the past two years — the first time since it was founded in 1969. This year, tenant organizers were hoping for a rent rollback to make up for the excesses of the Giuliani and Bloomberg eras. Comptroller Scott Stringer’s office estimates that the city lost over 150,000 affordable housing units between 1990 and 2012, while even tenants who remained on rent-stabilized leases saw their monthly rent rise by hundreds of dollars.

At one point during the meeting about two dozen tenant activists from the Metropolitan Council on Housing paraded down the aisle carrying a banner and signs reading “rollback” in the shape of a cresting wave.  “A rollback is what we need, we are here to stop the landlord greed,” they chanted as RGB chairwomen Kathleen Roberts tried to silence them.

Many tenants complained that despite the rent freeze, their rents have actually increased because of the illegal use of a rule allowing landlords to pass the cost of major capital improvements on to tenants.

Serillo told the board that one-third of his rent can be attributed to improvements on his apartment in the form of a new oven which he has been unable to use because he has been without cooking gas for seven months. He then went on to explain that when he and his fellow tenants filed complaints to the Department of Homes and Community Renewal (DHCR), they were harassed by the landlord’s employees.

Many tenants complained that despite the rent freeze, their rents have actually increased because of the illegal use of a rule allowing landlords to pass the cost of major capital improvements (MCIs) on to tenants. MCIs, such as a new boiler to a freshly painted hallway, allow landlords to raise rents building-wide. In her testimony, City Councilmember Helen Rosenthal (D-Upper West Side) said one of her constituents is paying for plumbing work that was never done. 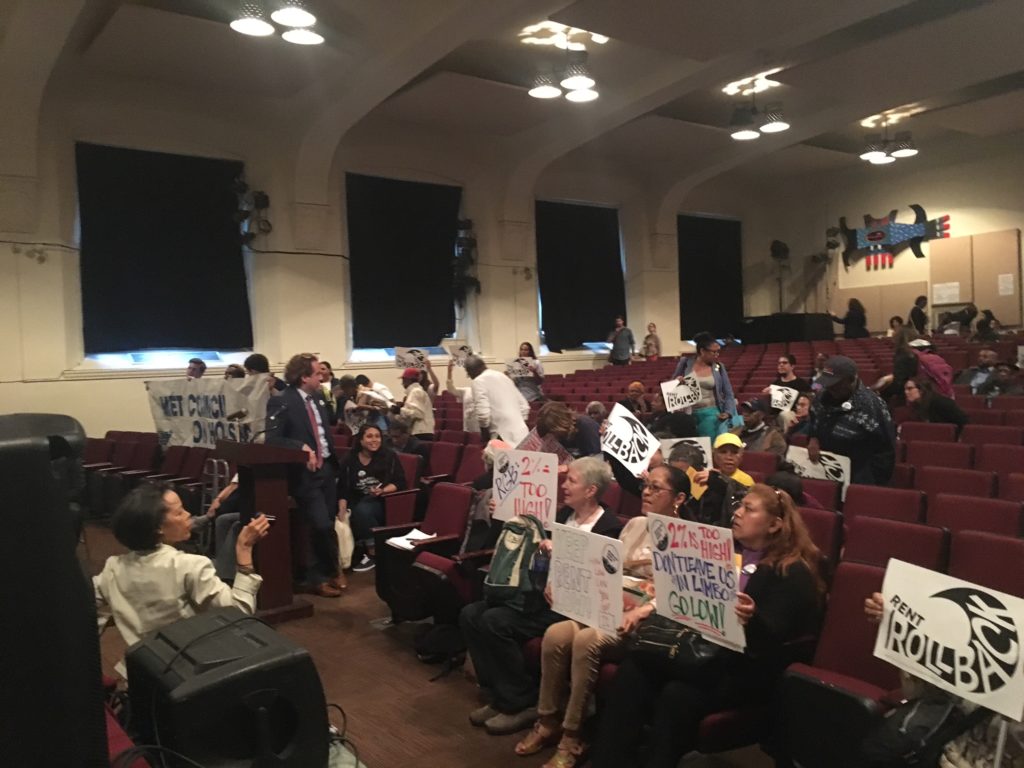 Tenant protesters at a June 8 meeting of the New York City Rent Guidelines Board in Harlem. Credit: Cole Boyd.

“The way the landlord gets away with it is he keeps putting in for another building permit” and by falsifying an architect’s signature of approval, said Rosenthal.

While tenants recognize that New York City’s housing crisis is much bigger than the RGB, they maintain that the board is in a position to send a clear message when it votes on its final plan at a public meeting on June 27: housing must be affordable.

Ava Farkas, Executive Director of the Met Council on Housing, ended her testimony by drawing on the words of Desmond Tutu: “‘If you are neutral in situations of injustice, you have chosen the side of the oppressor.’ To all the public members, vote your conscience!”