At first, Emma Amos’s Flower Sniffer (1966) doesn’t seem all that confrontational. In this piece, Amos paints herself as a lithe figure in a red dress, genially peering out towards the viewer while holding a bouquet of colorful flowers. The confrontation is in the context: Amos was a young black woman staking a claim in the heavily white, heavily male New York art world of the mid-20th century. She’s quoted saying as much: “For me, a Black woman artist, to walk into the studio, is a political act.” A later work, Sandy and Her Husband (1973) strikes a similar chord, with pleasant domesticity as a potential political catalyst. It shows a happy interracial couple, dancing together in a groovy middle-class apartment; Amos’s own artwork is hanging on the wall.

Amos’s paintings are a highlight of “We Wanted a Revolution: Black Radical Women, 1965-1985,” currently on view at the Brooklyn Museum. The exhibit is another fine example of the museum’s commitment to politicized and, especially, feminist curating (though as the exhibit points out, many of the artists in this show did not identify with “feminism” per se because of its white, middle-class connotations). As with other surveys of art from this time, much of the work here is both rousing for its mood of revolutionary possibility and dispiriting when you consider how far we have to go before that potential is realized. Elizabeth Catlett’s 1970 sculpture Target depicts the head of a Black man, stoic, caught forever in the gaze of some metal crosshairs, as if every viewer were preparing to shoot him dead. The work was made in response to the 1969 killings of Black Panthers by Chicago police. Forty-eight years later, how American culture at large abets state-sanctioned violence against Black people is still a very necessary and very urgent question. There’s also Betye Saar’s The Liberation of Aunt Jemima: Cocktail (1973), a wine jug with a homemade Aunt Jemima label, stuffed with an oily rag so as to become a Molotov cocktail. It’s a mixture of consumerism, mass-cultural racism, Black Power, liberatory protest and violent fantasy. It still packs a punch. 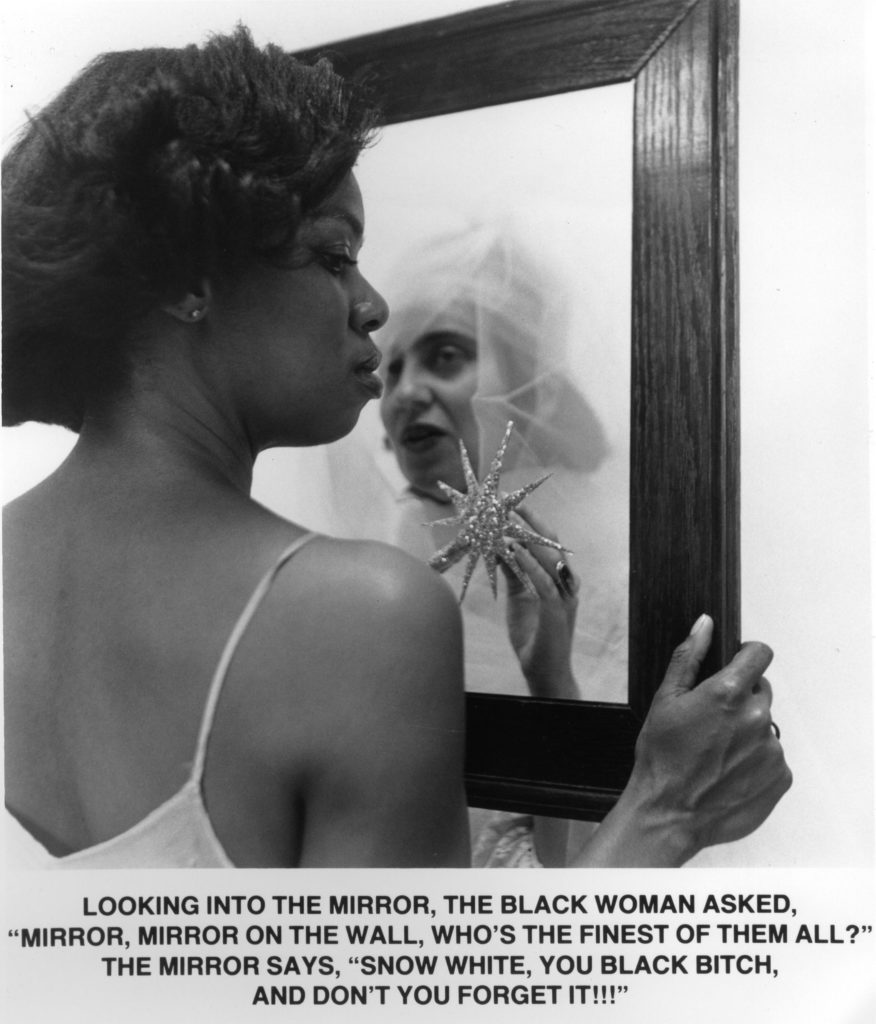 To be clear, though: while this show is imbued with strongly politicized motivations, much of the work on view is not expressly political (or at least, not on the surface). You get the idea that these artists (mostly Black American women), while contributing to the political struggles of the day, were also looking for a sort of post-revolutionary renaissance: working towards an age when artists like them might not need to struggle. Howardena Pindell, for example, is represented here by her sprawling, ahead-of-their-time abstract paintings, and also by the video Free, White and 21 (1980). In this work, Pindell addresses the camera directly in an aching, confessional style, recounting incidences of racism from her own life, such as being denied placement in advanced classes — despite her strong academic performance — because she wasn’t white). Faith Ringgold’s charming, subtle portrait paintings are contrasted with her bold protest posters for the Black Panthers (and other radical causes).

Among the other notable works here are Blondell Cummings’s Chicken Soup (1981) — an avant-garde dance piece on the assumed roles of women as both domestic worker and revolutionary firebrand — and Lorraine O’Grady’s Rivers, First Draft (1982) — a sort of utopian, multicultural performance piece, as realized by a bunch of costumed oddballs in Central Park.

The show ends with some bits of youthful genius by Lorna Simpson: assemblages from the mid-1980s that combine photos of black bodies with fragmented, poetic text. These enigmatic works are at the heart of the exhibit, evoking a tension between mythologized, collective identities and fragile, individual selves. It feels commonplace now, but it bears repeating that the deeply divided political culture of the current United States — up to and including the disastrous election of President Trump — is largely due to old but enduring strands of white supremacist ideology. This exhibit — with its visions of Black American women as painters, poets, filmmakers and intellectuals — is a small but sharp corrective. What emerges is a sense of people enacting multifaceted, complex, creative responses to their own tumultuous times.

Of course, now is a tumultuous time, too. More than half a century since the civil-rights era, the concept of racial equality — the idea of both Black and white citizens approaching each other on equal cultural footing — is apparently still too much for many Americans to bear. It’s remarkable then to step back and take note of how so many things — decades later — still have the power to shock.