On Tuesday, June 27, the New York City Rent Guidelines Board (RGB) voted to increase stabilized rents by 1.25 percent for one-year and 2 percent for two-year leases for the nearly one million apartments it oversees. Rent was not increased at all for Single-Room Occupancies (SROs), such as residential hotels, for the fifth year in a row. Both votes passed with a seven to two count, with the two landlord representatives being the only board members opposing both rulings. The ruling comes after two years of consecutive rent freezes, the first in the board’s history.

Tenant groups were infuriated by the vote. They have been calling for a rent rollback in order to alleviate the damage done by Bloomberg-era increases, which they see as overcompensating landlords and burdening New York’s most vulnerable residents.

“I’m very disappointed because they reward the Draculas that are sucking the blood of the people,” said Carine Golden of northwest Bronx immediately after the vote.

The increases are certainly lower than they could have been given that the range set by the board before the hearings was 1-3 percent for one-years and 2-4 percent for two-years. But as Harvey Epstein, one of two tenant representatives on the nine-member board, took time to explain to the audience and fellow board members that landlord costs are at historic lows.

Members of the board were met with a torrent of vituperation from the audience.

“Mortgage rates … vacancy losses, collection losses — the lowest in history,” said Epstein. “The costs of taking loans remain at all-time lows. But the sales prices continue to rise in every borough.”

According to Epstein, net operating incomes — the percentage of every dollar in rent landlords make in profit on their buildings — have gone up for the eleventh year in a row.

“If you really have a problem, open up your books,” Epstein dared the landlords in the room.

Over recent months, the RGB held five public hearings where hundreds New Yorkers testified, many arriving with community organizations to demand a rollback or at least another rent-freeze. An hour before Tuesday’s meeting opened in the auditorium of Mason Hall at Baruch College, over a dozen tenant groups staged a demonstration against the rent raise around the corner at E. 25th Street and 3rd Avenue.

I spoke with Clara Joseph of Neighbors Helping Neighbors just before she addressed the crowd. 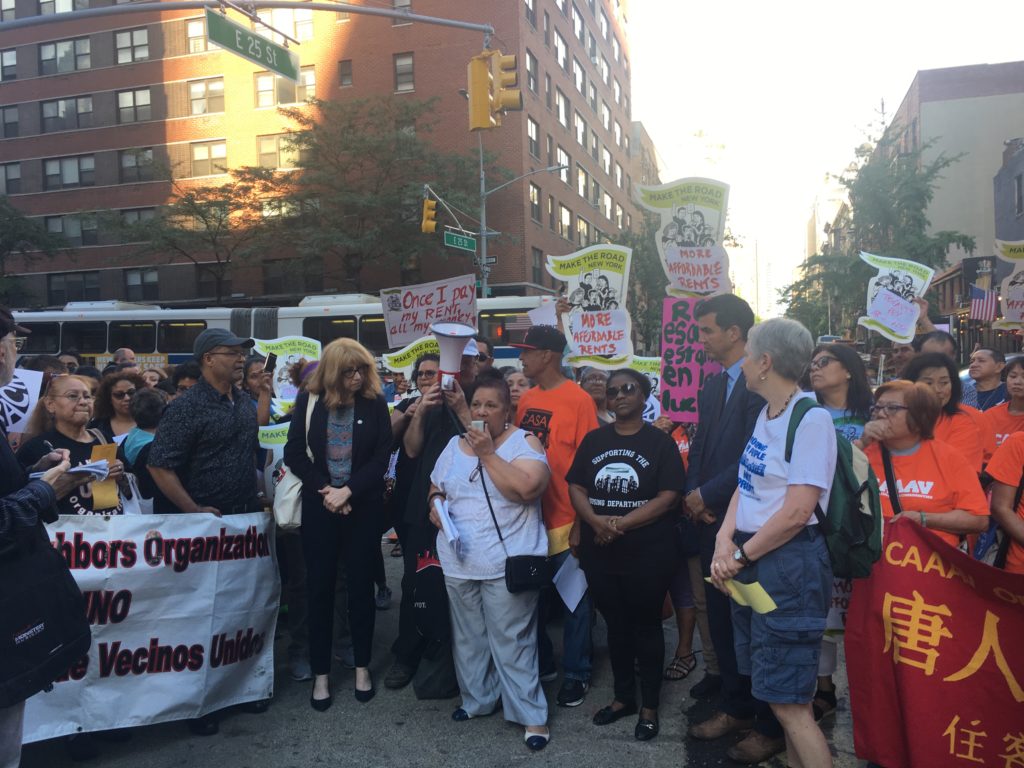 Tenant activists rallied ahead of the Rent Guidelines Board meeting on June 27. Credit: Cole Boyd.

“Why are they retreating?” Joseph asked, pointing out that in March the New York State Supreme Court struck down a lawsuit against the previous rent freezes brought by landlord advocates from the Rent Stabilization Association.

The RSA claims to be the primary guarantor of affordable housing in the city but insists that a 4 percent increase for one-year leases is what’s necessary to keep that housing secure.

After the rally, tenant activists marched to the meeting accompanied by musicians playing drums and horns. As hundreds of tenants trickled into Mason Hall, chants against the rent hike filled the auditorium. A festive round of “rent-rollback-limbo” took off with participants singing, “How low can you go?”

When board member Hilary Botein began reading a statement — telling tenants, “We must weigh the economic conditions of the residential real estate industry” — she and her colleagues on the stage were met with a torrent of vituperation from the audience.

“They’re full of bologna, every one of them!” one audience member hollered.

“Tenants who came to the RGB hearings are not a representative sample of rent-stabilized tenants in New York City,” Botein insisted, but from this point on it was impossible to hear her over a storm of boos. Botein stopped trying and instead handed the statement out to the press afterward.