New York City subway riders have put up with increasingly frequent delays, which have risen from 28,000 to 70,000 a month since 2012. The constant repairs needed on the over-100-year-old system, combined with overcrowding, have made travel times for many commuters even longer than before. The transit system has become one of the most deplored aspects of city life, though few New Yorkers understand how decisions are made by the Metropolitan Transit Authority (MTA).

Gov. Andrew Cuomo has announced a proposal that would give him control over the MTA’s board by adding two more members to be appointed by him. Yet the governor already appoints five of the 14 members, plus the board’s chairman. Additionally, as the straphangers’ advocacy group Riders Alliance pointed out in a statement, “the Governor dictates MTA spending priorities and the Governor dominates the State budget and legislative negotiations that determine how the MTA does its job.

“In practice, can the Governor point to any situation in which other MTA board members have teamed up to block his initiatives?” Riders Alliance asks. “The problem is not MTA board structure; the problem is the absence of leadership and the lack of a credible plan from Governor Cuomo for how he will fix the subway.”

Politicians have frequently touted their support of large capital projects like extending the 2nd Avenue line and, similarly, the number 7 train. But funding for the less flashy but perhaps more important repairs is harder to come by.

With riders paying more for worsening service, I spoke to commuters as they patiently — or not — waited for their trains around the city. With few exceptions, the people I talked to were fed-up with what they see as governmental incompetence but were confused over who to blame. 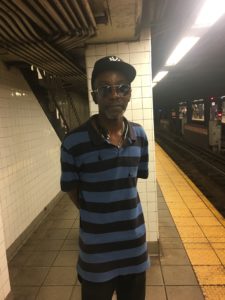 This is the best city in the world but we have the worst train system in the world. Every day there’s something wrong with the A train, M train, all the trains.

MTA, the Mayor, the Governor — anybody that’s got something to do with the MTA. We should have a better system than what’s going on now. You see the news with the LIRR and the PATH and all this; it’s ridiculous. For New York City, you know, it’s like back in time. Back in the old days, the trains used to work better than they do now. I guarantee you, before I get home today, something is gonna be wrong with one of these trains.

The worst thing is having to stand in the heat, below ground, waiting for a train that you know was supposed to arrive at a certain time and it’s not coming. Or there’s always these abrupt stops and then they have the audacity to say, “We apologize for the inconvenience,” but they just stop mid-track in darkness, underground and you have to get to class or work and you just have to wait.

The MTA has to really up its game. It definitely needs to facilitate better management in terms of the ability to decrease stoppings.

I’m tired of it, everybody is. There are just constant problems. Switching problems, delays — that type of thing. Overcrowding is a huge issue. I would say to Mayor [Bill] de Blasio: He runs our city, he could get on top of this.

It’s lousy. Every day, I leave my house early, I can’t even get to work on time. This morning I left the house around 6:30 and I didn’t get to work in Queens until around 9 o’clock. An hour trip took me about two and a half hours this morning. I had to call my employers and let them know that I was gonna be late. And this afternoon — the same thing. The train is not working. I’m pissed, I’m pissed! This thing has been continuing for too long. I mean, where’s it gonna go?

I hold the MTA responsible of this. Who else? They’re the ones in charge of it. 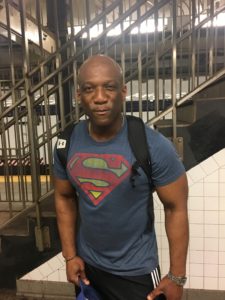 Well I got to tell you, we don’t get to work on time any longer. Even if you walk out of your house thirty minutes earlier, you don’t get to make it on time. Especially the E train that comes from Jamaica. It’s always delays or a sick passenger. You get to work thirty minutes late and there’s no way your employer is gonna understand that the train’s been late. He’s gonna tell you to get out of the house an hour early, which is not fair at all.

As of right now, there was a train that just passed by, and I couldn’t even get into it because it was too crowded. It’s gonna take me at least two hours to go home. Normally, I’d get home in an hour. But with all these problems, I’ll get home in two hours, if I’m lucky.

The mayor should take care of it because it’s almost three dollars we’re paying for a fare and we’re not getting anywhere. It’s gonna get worse because the city’s getting too crowded. We gotta find another way of making transportation work.

It used to be much better. Don’t get me wrong, they’re fixing it all the time and they’re doing a humongous amount of work, but when you can’t get out of work and go home on public transportation . . .

It hasn’t really been an inconvenience for me because I live near the A train and not a lot of construction so far has happened. When I used to live by the 1 there was a lot of construction and that was always an issue but as long as you plan ahead it’s really not a big deal — for me that is.

It’s not the most ideal way of traveling.  Yeah, our resources are kind of limited. If you have the money to go pay for a cab, then do it. But pretty much, it is what it is.

I wish I had a car and was driving.

I think it’s a lot of politics. All of these politicians, they need to ride these subways more often. They’re driving their cars, they don’t ride the trains. If they had to ride the trains they would see what it’s like for people.