The Indypendent
Menu
A Free Paper for Free People
Gene Hackman and Roy Scheider in The French Connection (1971). Source: IMDB.

This July, Film Forum invites us to look back at New York’s ungentrified heyday with the series “Ford to City: Drop Dead — New York in the 70s.” I recently spoke with Bruce Goldstein, Film Forum’s Director of Repertory Programming, about the differences and similarities between old and new New York, his favorites from the series and Times Square, among other topics.

What do you hope audiences get out of this series?

Entertainment is what I’m looking for audiences to get out of it. But I think they’ll see that the city really is basically the same as it always was. Socially, it’s the same. And, visually, the city really hasn’t changed that much, like other cities. New Yorkers act the same. Maybe they’re a little more polite now. There are some archetypes in these old movies, like the rude New Yorker, that have kind of disappeared. The New York accent has disappeared. The old New York accent.

Looking at these films, after gentrification, will it be easy for filmgoers to say, “Oh, well, it’s a good thing New York City got its makeover.”

In some ways, New York was more interesting before gentrification. I used to love going to 42nd Street and Times Square, which was considered a rather dangerous area pre-Disneyfication and thinking of the theaters there not as places of danger but as wonderful ruins. You could feel the history more in the old city. More of the past was alive for me, personally, and that’s another reason I love seeing these movies. 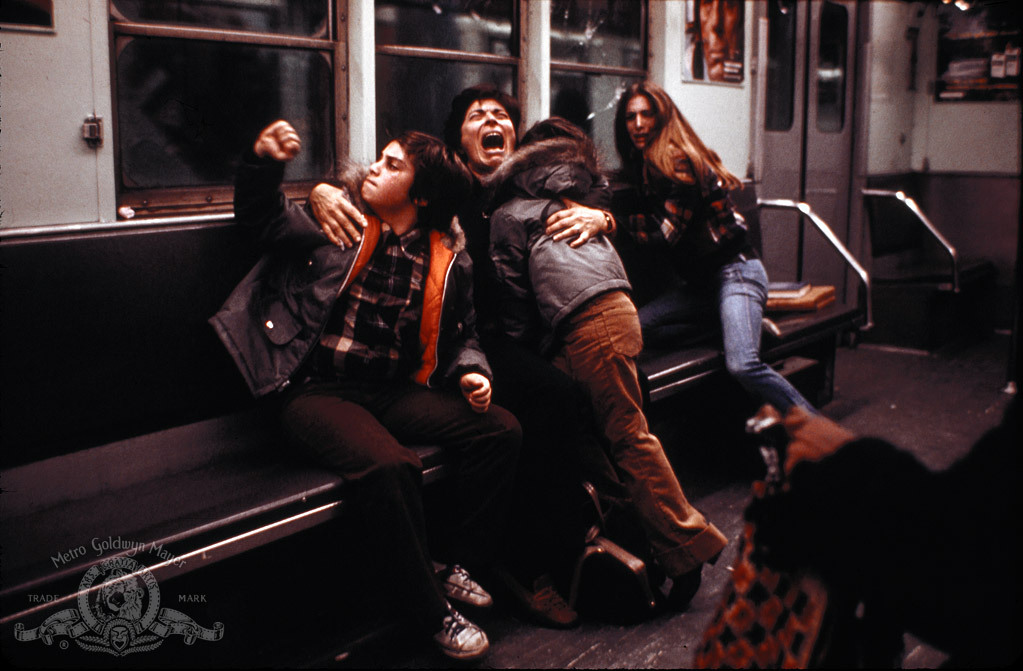 No, these aren’t modern day F train riders. This is a still from the 70s thriller The Taking of Pelham One Two Three, screening at Film Forum this month.

Do you think it’s possible, though, that, let’s say, some filmgoers might look at these films and go, “It looks kind of grungy; maybe it’s a good thing that things have been cleaned up?”

I think people are happy to live in a city with less crime; that’s for sure. It’s great to see it the way it was but the thing you’ve got to always understand is that movies don’t necessarily reflect the reality. They’re movies and they’re reflecting a perception of what the city was, not necessarily what it was.

I don’t really remember it that dangerous or decrepit. Of course, I lived in {Greenwich} Village in the 70s and it was maybe a little nicer than parts of the Bronx or parts of the East Village. These movies reflect the way America saw New York from news reports. After the Kitty Genovese case in ’64 when there was this idea that New Yorkers didn’t get involved.

But New York did have a lot of problems in the 70s. We almost went bankrupt. They cut services tremendously. Police, schools, libraries — everything got cut. Garbage. I remember the garbage collectors went on strike. That was the worst. You could do without police but not without sanitation workers.

What film is your favorite out of these, if you had to pick one?

Equal is The Taking of Pelham One Two Three. It gets the subway right and it uses the subway. All the stations are exactly what they should be. It uses the geography of the city so beautifully. No New Yorker would be disappointed.

Outside of New York it doesn’t matter if you get the geography wrong but if you do something in a movie about New York and you show it to New Yorkers, well. Like you can’t take the L train [from 96th Street] to Union Square. They do that in The Warriors. In Pelham One Two Three that doesn’t happen.

You know, the one I just watched again and I was amazed how good it was was Saturday Night Fever. When it came out I said, “Eh, it’s not my thing, this disco scene.” The thing about seeing something at the time and then 40 years later, it’s quite a different thing. Now Saturday Night Fever looks like it almost invented the era. I don’t think it’s a true depiction of how people really acted or dressed, but it influenced the way people acted and dressed. It was such a big hit. And it’s a lot of fun.

It was kind of like a fantasy that became the truth in some way.

“Ford to City: Drop Dead — New York in the 70s” is playing at Film Forum (209 West Houston St.) until July 27. For listings and showtimes visit filmforum.org.