Amid protests and a police presence that turned Astoria’s P.S. 70 into a fortress, locals pressed Mayor Bill de Blasio on a range of issues, from his promise to close Rikers Island to escalating homelessness in the city. The town hall on July 19 was one of a series de Blasio is holding around the city ahead of the September Democratic Primary, in which the Mayor is running for reelection without serious opposition.

Demonstrators aligned with the #CLOSErikers campaign held signs from across the street reading, “10 Years Sucks” and “10 Years is a Punt” — a reference to the mayor’s 10-year plan to close the jail, long plagued by corruption, a culture of violence and an overrepresentation of New York’s black and brown communities. The twenty or so protesters at one point even broke into an original “Close Rikers” dance.

Watch or action at the @NYCMayor town hall at https://t.co/tHRssjAsHg pic.twitter.com/NHkmay62x0

Meanwhile, police cars lined the sleepy street of attached row-houses so common to Astoria. Approximately 30 uniformed officers were on guard within P.S. 70 with another 15 or so plainclothes and higher ranking, white-shirted officers positioned outside, as City Hall officials and eventually neighborhood residents filed in.

The town hall — part of de Blasio’s “In Your Borough” outreach program — saw the mayor with reelection on his mind stake out middle-of-the-road positions. His do-no-wrong strategy was best exemplified when de Blasio agreed with a constituent that landlords who harass their tenants are a problem and only a few questions later, agreed with another constituent that landlords are often taken advantage of by their tenants.

While there is surely nuance in every issue, the mayor’s careful political maneuvering set the mood for the hours-long discussion.

Many residents spoke to fears of a looming wave of development projects about to crash over Astoria, undoubtedly during the next mayor’s term.

Following in the footsteps of Long Island City, which in recent years has seen more development than any neighborhood in the United States, the New York real estate industry is increasingly looking to Astoria and deeper within Queens to mount luxury developments.

Multiple residents expressed concern about the enforcement of 421-a, a statewide program known as Affordable New York that provides tax breaks to developers if they agree to build a certain percentage of affordable housing units. Although the law has been viewed largely as a giveaway to the real estate lobby, it forces a semblance of responsibility on developers.

To illustrate his point, de Blasio took a $20 bill from his wallet and handed it to Maria Torres-Springer, his housing commissioner. “Pretend you’re a developer and you’re getting a tax break, but then it turns out you cheated us,” the mayor said. He then grabbed the bill back.

According to the Campaign Finance Board of New York City, the real estate industry comprises the largest source of campaign contributions to de Blasio.

Costa Constantinides, the City Council representative for Astoria and moderator of the town hall, likewise has received generous campaign contributions from both developers and related industries.

Among Constantinides’ donors are Rockfarmer Properties, a company that plans to build a 94,000 square foot luxury condominium building in Astoria; George Alexiou of Alexiou Realty, which currently has 55 properties for sale in Constantinides’ 22nd District; and Parkside Group, a public relations firm that represents Tishman Speyer, one of the largest real estate firms in the city, currently completing two 27-story office buildings and the Jackson Park luxury apartments in neighboring Long Island City.

While they have partnered on mandatory inclusionary zoning, a stipulation that forces developers to provide 25 percent affordable housing in areas zoned as such, the fact that the real estate industry has invested heavily in both the mayor and councilman may yet harm their credibility on this issue.

De Blasio pointed to initiatives like a two-year rent freeze in rent stabilized apartments and increased investment in public housing as tools at the government’s disposal to keep people in their homes. But, he conceded, these tools “don’t stop the private market.”

While taxes are a major issue for small business owners, BIDs are notorious for attracting high-paying big box stores that displace neighborhood shops. Since its inception in 1991, the Steinway BID has drawn chain stores like Victoria’s Secret, the Gap, Starbucks and multiple national banks, all of which can afford to pay higher rents. These public-private partnerships tilt power towards the property owners, who serve on the BID’s board of directors and seek out higher-paying national or global chain stores.

Mohammed Attia, an Astoria resident who works as a food vendor in Manhattan and serves as a member of the Street Vendor Project’s leadership board, spoke to the downsides of BIDs. A bill to lift the cap on the number of permits given to street vendors has been met with great opposition by the NYC BID Association. Because the number of available permits is currently capped at 3,100, street vendors are forced to pay exorbitant prices for black market permits and face heightened scrutiny from police, city officials and even private security employed by BIDs.

“I get inspected in my push cart ten times more than any other restaurant,” Attia told the mayor.

New York’s street vendors are predominantly immigrants who may not have access to more traditional means of work or capital. Yet as BIDs homogenize neighborhoods and raise prices by reducing competition, residents tend to seek out the authenticity and cheapness of food carts.

“The goal is to come out of this with a rational system,” the mayor said. “Right now a lot of enforcement comes down to if the food carts are in the right place and if the vendor can legally sell.”

The Steinway Astoria Partnership did not respond to The Indypendent’s request for comment.

Ten Years is too Long to #CLOSErikers 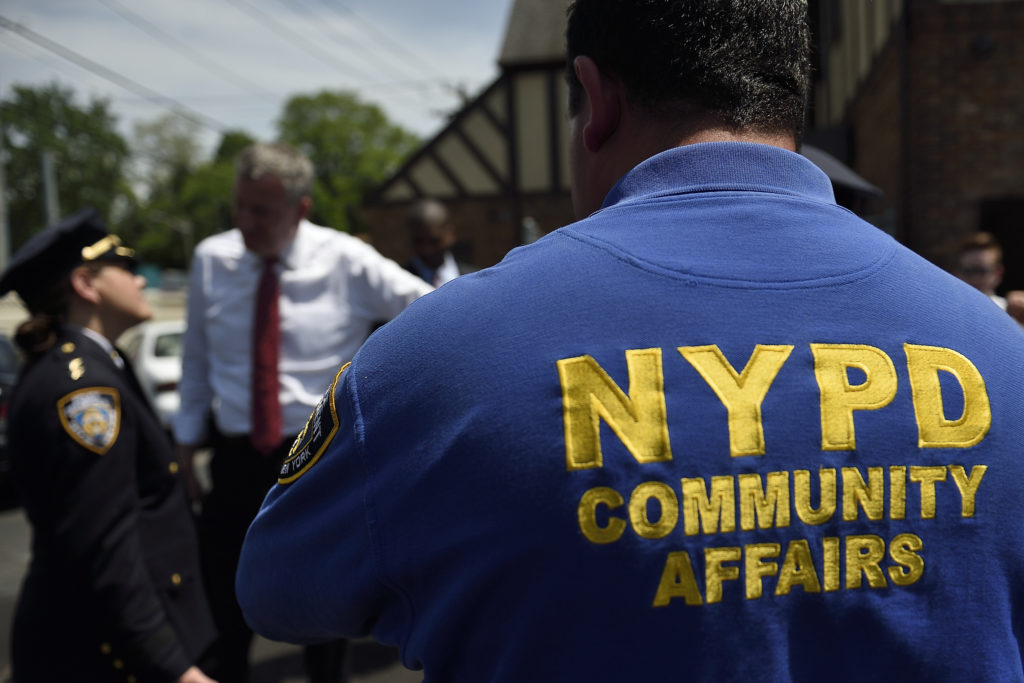 During the town hall a resident who described herself as a fourth-generation New Yorker challenged the mayor on broken-windows policing and his ten-year plan to close Rikers Island.

“It doesn’t seem that the broken windows policy and quota driven police practices are helping to reduce the number of inmates on Rikers Island. What are you going to do to change that?” the resident asked.

The NYPD ended its practice of conducting stop-and-frisks during his tenure, the mayor said, and overall crime and arrests have gone down. That is “why we came to the conclusion that we could close Rikers.” The phrase broken windows muddies the conversation and statistics he cautioned while conceding, “I understand why for some people broken windows brings up a very negative concept.”

Multiple studies over the years have proven that Broken Windows policing unfairly targets and imprisons communities of color by a large margin.

Prison reform activists cheered the announcement of Rikers closure in June but many, including protesters outside the town hall, argue that ten years is too long.

Janos Marton, Policy Director at Justice Leadership USA, one of the nonprofits leading the #CLOSErikers campaign, characterized the mayor’s plan to close the prison as a stalling measure.

“We respect that closing Rikers will be a challenging process,” Marton told The Indypendent. “But the 10-year timeline reveals a lack of political courage and lack of urgency. “[Mayor de Blasio] could be reaching out to the community for solutions. He could be implementing city level Lippman reforms. He could be drafting a budget that provides meaningful off-ramps from the criminal justice system . . . Instead, he is dawdling.”

Halfway through the town hall, some ten members of the International Brotherhood of Electrical Workers (IBEW) stood up with signs that read “don’t forget Local 3!”

The union members, who work for cable giant Charter-Spectrum, have been on strike since their contract expired on March 31. Eighteen hundred Spectrum employees and their families remain off the job after the company indicated it would cut healthcare benefits, limit their collective bargaining ability and reduce over-time hours. Members of Local 3 stood in silence for five minutes or so, until de Blasio acknowledged them. The mayor extolled his “strong support for the men and women of Local 3” and condemned the company for its failure to negotiate a deal with the workers.

“I went to the picket line today with the council member to send a message that we have run out of patience and expect action,” de Blasio said.

Some IBEW members expressed gratitude to the mayor, noting that de Blasio has offered to mediate the contract dispute, but critics say he and city council could be doing much more to pressure the company, including retracting Charter’s franchise agreement with the city.