What does Trump dream about?

In his dreams, Trump faces an auditorium filled with men in suits. He has a bulge in his pants.  He views a sea of unmoving faces. Suddenly the podium breaks open. Splinters fly as his phallus emerges, a cigar-shaped promontory of the purest gleaming gold. It casts a long shadow over the crowd of suits. Trump feels good about this. He stirs in his bed.  A Secret Serviceman cracks the door of the bedroom to check if everything is alright. The white noise pouring from Trump’s mouth is the howl of money, the fast-as-light money that flies across borders, flying into Africa, flying across the Andes, seeking the lowest possible tax rate.

The men in the audience are heaving with rapture. They are suffering a pleasurable nausea, an orgasm that is the opposite Tantric sex; an unending, hopeless ejaculation. It is the sensation of a billion dollars coming into your body. Trump wakes up. He needs to Tweet. He needs to Tweet badly. He is breathing heavily. He cries out like a child or an animal. The Secret Serviceman is shaking him, shouting something. Trump remembers that he is President of the United States.  Hah! Let the dream begin!

What do you suppose Donald and Melania talk about when they’re all alone?

Thank you so much,

Melania can talk for upwards of two hours without interruption. Trump periodically alternates his facial pose to indicate he is listening but each expression he assumes resembles the look of a sensual dry heave in ultra-slow motion. During these moments he fantasizes. Right now he is dreaming of a beauty pageant he used to run on the steppes of Mother Russia. One hundred and forty-four contestants are high-kicking toward him, a chorus line advancing like a world war. Each contestant has a full bladder. Melania shakes him awake with a look on her face like she was there too. “I was not humiliated by reciting Michelle’s speech!” she says. “I’m glad Steve Bannon thought it was a classic dis and hilarious. I can make a fool of myself in front of millions. It feels just like my private life!” 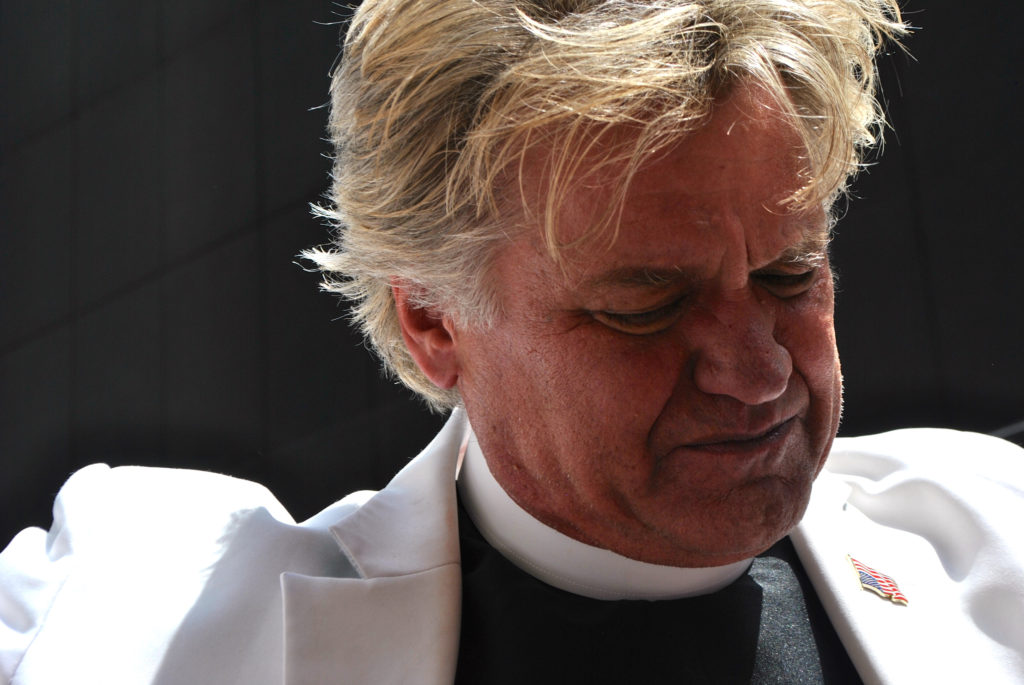 Here’s a question: What is Trump’s favorite Care Bear?

Animated bears are not white males. Trump hits the remote. He has a suspicious feeling about Funshine Bear. He sees cartoon characters the way the artist Andres Serrano saw Jesus Christ: Drowning in the urination of God.

Trump fires off tweets like Funshine’s belly shoots light. The tweets go monstrously viral. Trump’s supporters — a living, farting trash-mass — seek out and suffocate innocent citizens who dare to speak in complete sentences. Care Bears are losers. Build a wall around them and make them pay for it.

Reverend Billy is an activist and political shouter, a post-religious preacher of the streets and bank lobbies. Billy and the Stop Shopping Choir will perform on Thursday, July 27 at 7:30 PM at the bandshell in Prospect Park — part of BRIC Celebrate Brooklyn.

Have a question for the Reverend? Email RevBilly@Indypendent.org or tweet to @revbillytalen.

Photo (top): A mounted moose looks on disparagingly as Trump destroys what was left of decency in this country. Credit: White House/Flickr.