The Indypendent
Menu
A Free Paper for Free People
Members of the New Sanctuary Coalition outside of ICE headquarters in Manhattan on July 13. Credit: Elia Gran.

Almost three decades ago Jean Montrevil, a young Haitian immigrant, was convicted on a drug offense and spent five years in prison. After his release, he turned his life around and became a successful small businessman, a father of four U.S.-born citizen children and an immigrant rights activist. He has had no further interaction with the criminal justice system.

On Thursday afternoon, about 50 of his supporters participated in a Jericho Walk organized by the New Sanctuary Coalition. They marched silently around 26 Federal Plaza in lower Manhattan five times in the blazing sun. As they completed each trip around the building, the groups would stop outside the front entrance and lift their hands up in the air in prayer and then resume walking.

The concept of the Jericho Walk is derived from an incident in the Old Testament in which the Israelites are said to have used the power of prayer to topple the walls that guarded a rival city. In present-day Jericho walks, participants are trying to put pressure on an implacable bureaucracy that is intent on deporting as many “criminal aliens” as it can, regardless of the human toll it takes on the immigrants and their family members.  In this case, they are supporting Montrevil, a green card holder at risk of being deported back to Haiti on July 20 when he is scheduled to report for a check-in with agents from U.S. Immigration and Customs Enforcement (ICE), which is based on the ninth floor of the building.

“If Jean is deported, he will go to an extremely dangerous situation in Haiti,” said the Rev. Donna Schaper of Judson Memorial Church. “Perhaps jail. Certainly no health care. Perhaps persecution in jail.” 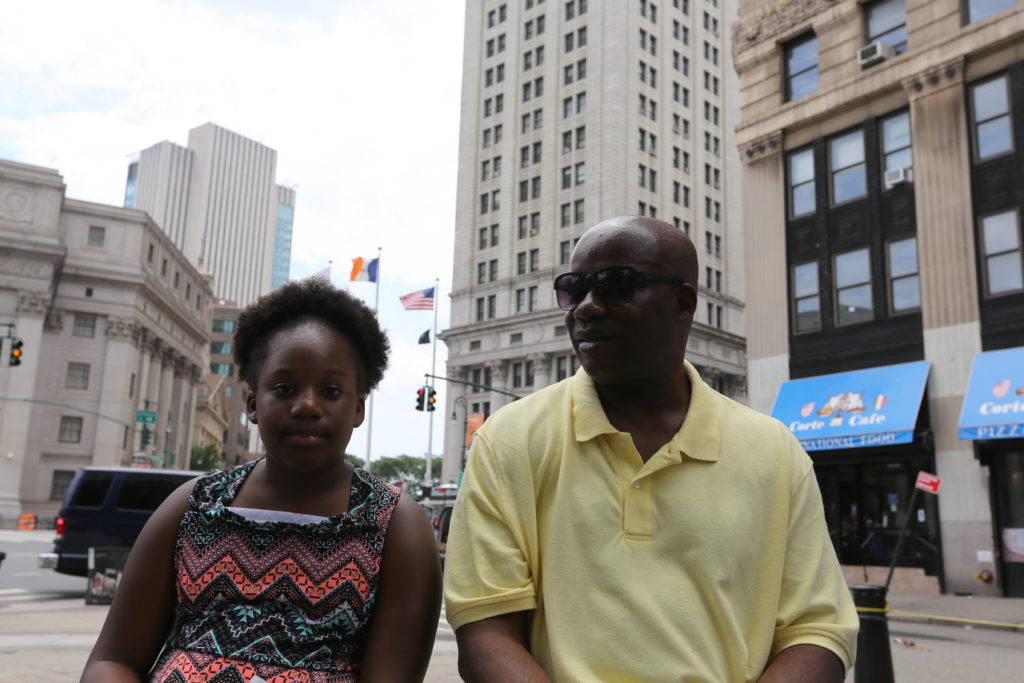 Jean Montrevil with his youngest daughter outside of 26 Federal Plaza. Credit: Elia Gran.

Founded in 2007 by Montrevil and several others, the New Sanctuary Coalition is an interfaith network of congregations, organizations, and individuals, standing publicly in solidarity with families and communities resisting detention and deportation in order to stay together. Since Donald Trump’s inauguration as president, the group has had to combat stepped-up enforcement efforts targeting for removal legal residents whose criminal violations are decades in the past.

“He made a mistake when he was 19,” Montrevil’s former-wife Jani Cauthen told the crowd assembled in the shade at the end of the Jericho Walk. “He’s now almost 50 and he’s still fighting the same mistake.”

Montrevil’s supporters will gather again outside 26 Federal Plaza on Thursday morning before he enters for his check-in. Organizers are hoping to have a larger crowd on hand for the occasion.

“This is how we build sanctuary when we acknowledge that each of us is valuable,” said Juan Carlos Ruiz.

Photo: Members of the New Sanctuary Coalition outside of ICE headquarters in Manhattan on July 13. Credit: Elia Gran.