Occupying the Brooklyn Museum’s sprawling first-floor gallery is a powerful new exhibition, “The Legacy of Lynching: Confronting Racial Terror in America,” which in the museum’s own words “seeks to spark an honest conversation about the legacy of racial injustice in America today.” Walking up to the twin doors that allow access to the exhibition, the viewer first confronts a quote from African-American essayist and author James Baldwin: “Not everything that is faced can be changed, but nothing can be changed until it is faced.” Neatly printed in bold type font on the exhibition’s outer wall, the quote neatly frames the purpose of such a daring and provocative endeavor.

Bringing together research from the Equal Justice Initiative’s (EJI’s) recent report on the history of racial terrorism in the United States between 1877 and 1950 and featuring artworks and archival material from Brooklyn Museum’s permanent collection, the exhibition faces the dark American past of racial injustice. What this looks like within the gallery is a meticulously curated distribution of artwork from such major African-American artists and activists as Dread Scott, Melvin Edwards, Jacob Lawrence, Glenn Ligon and Sanford Biggers. These works encircle a set of viewing spaces where the oral histories collected by the EJI can be witnessed and contemplated.

Throughout, the exhibition emphasizes that racial violence and injustice has never ended in this country. In addition to ongoing acts of vigilante violence that, in recent years, have led to the deaths of Trayvon Martin, anti-racist protester Heather Heyer and others, it continues to evolve through the insidious systemic effects of racial biases in policing, incarceration, education and employment. Poignant and timely, the combination of artwork and historical testimonies show that America’s legacy of racism is a consequential and ongoing reality. Oral histories captured by six talented videographers and commissioned for the work attest to racism’s contemporary permutations. 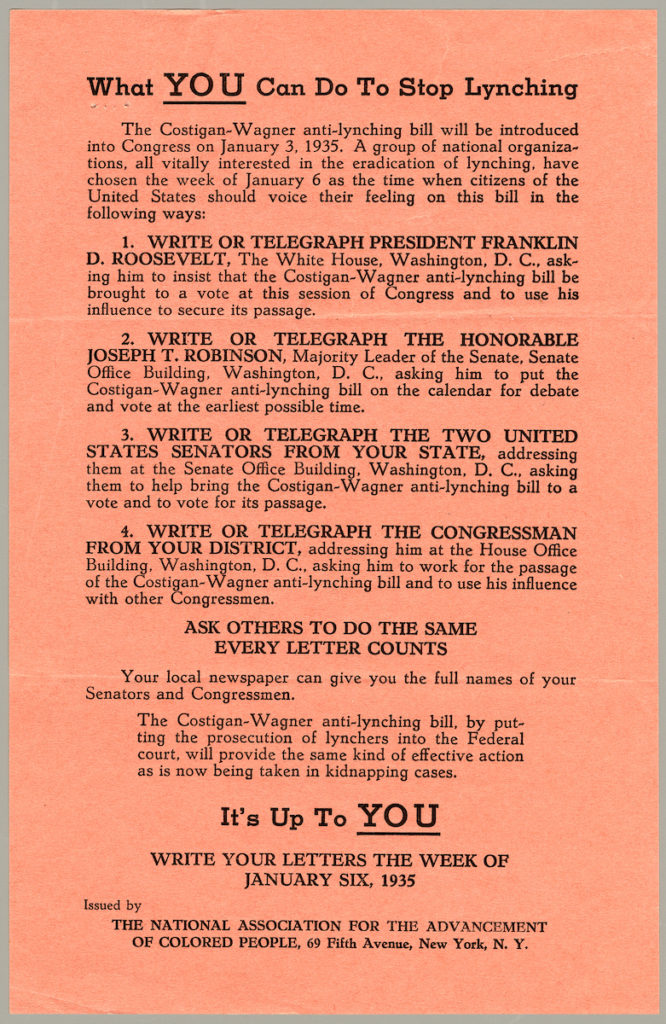 NAACP flyer from the Brooklyn Museum Archives. Records of the Office of the Director (P.N. Youtz, 1933-38).

In one of the videos on display, Shirah Dedman, Phoebe Dedman and Luz Myles detail their search to uncover the documentation and circumstances surrounding their relative Thomas Miles, Sr.’s lynching in the early half of the 20th Century. In another video, Anthony Ray Hinton discusses the confounding tragedy of being wrongfully imprisoned and put on death row.

The exhibit has so much on offer and discreetly organizes all to provide a coherent and impactful whole. Punctuating the space of the exhibition, there are significant and contextualizing quotations from prominent African-American intellectuals, writers and poets. Beside the Baldwin quote at the entrance there are quotes from Langston Hughes, Maya Angelou and others that offer a potent lyricism to the images and video. “There is no greater agony than bearing an untold story inside you,” reads one quote from Angelou, perfectly situated between two of the oral history viewing spaces. Primary documents from early 20th Century anti-lynching campaigns and the civil rights movement that come straight from the Brooklyn museum archives are also on display, including a 1935 NAACP anti-lynching flyer, “What You Can Do to Stop Lynching.”

Juxtaposed with these impactful oral histories, quotations and primary documents are fine art pieces like Melvin Edwards’ assemblage sculpture from his Lynch Fragments Series (1960-present). Bringing together the raw material fragments of slavery’s legacy, Edwards fuses hammerheads, chains, locks and railroad splices symbolically evoking the brutality of the African-American experience. Rusted metal and serrated edges are woven together in this sculpture to present a raw material history that compels the viewer to engage. This material confrontation is balanced by such works as the small tempera paintings of Jacob Lawrence’s Migration Series (1940-41), a vibrant and expressive portrayal of the mass migration of African Americans from the South to the North during the early 20th Century. In the series, pieces like The Builders and Harlem Street Scene celebrate the perseverance and spirit of Black communities forced to flee to the North due to the racial terrorism and the economic deprivations of the post-reconstruction period. 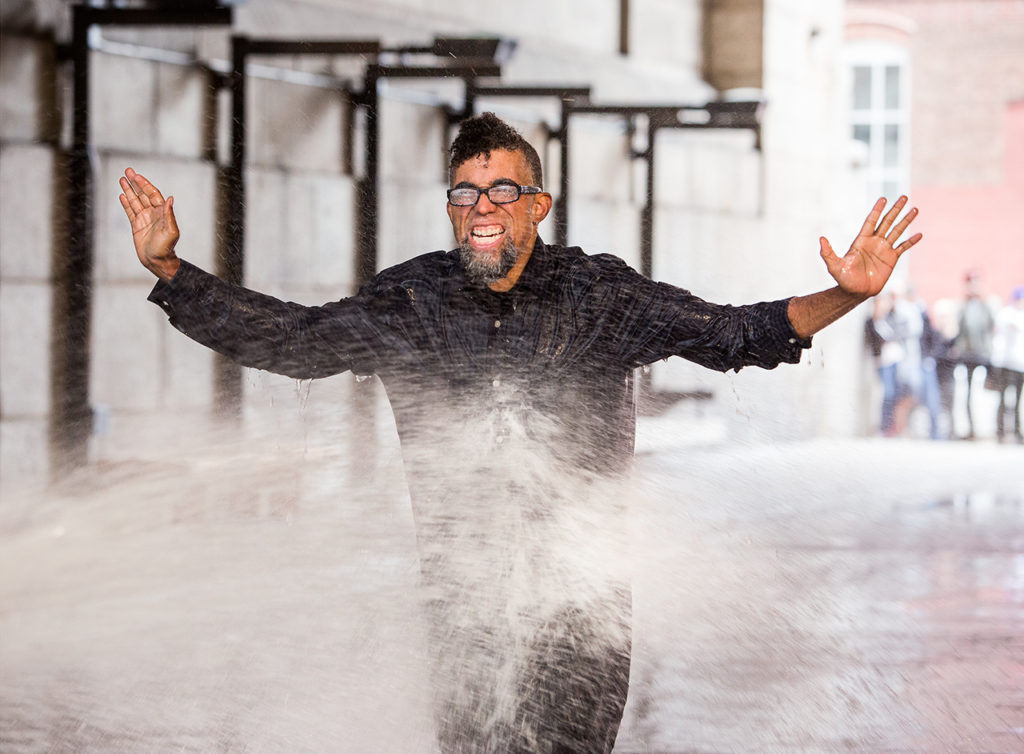 Dread Scott, On the Impossibility of Freedom in a Country Founded on Slavery and Genocide, performance still 2, 2014. Photo credit: Mark Von Holden Photography.

Art-world heavy weights like Mark Bradford and Kara Walker provide depth and complexity to the exhibition overall. In a long display case at the center of the exhibition Walker’s silhouette cut-outs fantastically project a dark satirical vision of the Antebellum South. On the opposite wall are two large scale photographic stills from Dread Scott’s provocative video performance piece, On the Impossibility of Freedom in a Country Founded on Slavery and Genocide (2014). The artist is shown facing the full force of a raging fire hose, walking into it and standing with hands raised in peaceful protest. Scott is working through and recalling the history of American civil rights activism but also challenging the notion that the important work of the civil rights movement has ended.

This exhibition falls in line with the broader popular movement towards a more direct engagement with and consciousness of systemic racism and injustice. The Black Lives Matter movement is certainly part of this broader consciousness. Recent documentaries such as Stay Woke: The Black Lives Matter Movement (2016) and The Black Panthers: Vanguard of the Revolution (2015) from the brilliant writer-director Laurens Grant, as well as Ava DuVernay’s 13th (2016) also contribute greatly in this direction. With the EJI’s groundbreaking research into the history of lynching and racial terrorism in America, proponents of social justice have a powerful new body of information to rally around.

At a time when the current Republican administration is doing its best to suppress minority voting rights and reignite the war on crime, it is crucial to heed the voices and to witness the expressions of torment, frustration, agitation, and agency featured in “Legacy of Lynching.”