I recently had the privilege of doing some interviews and speaking at a north New Jersey Democratic Socialist of America meeting (it kicked ass) about universal single-payer health care. One question that came up several times is, “Well, how do I persuade people who are on the fence?”

It’s symptomatic of my bubble that this isn’t something I had a ready answer for! So I thought about it and I think I have something I can commit to. In short, it’s that we’re already spending the money, but profit-seeking corporations aren’t giving us our fair value for it.

To break it down further:

1) The same care costs much more in the United States than anywhere else.

I really like this Organisation for Economic Cooperation and Development (OECD) working paper on relative hospital costs, which shows that U.S. hospital costs, adjusted for GDP, are 42 percent greater than the average of the sample — or, basically, 40 percent more expensive than France. 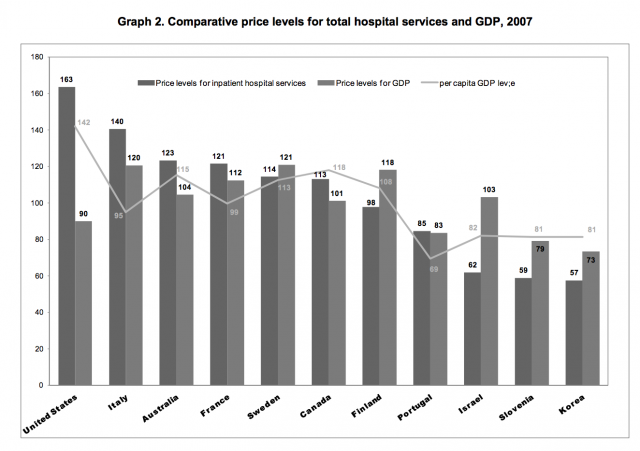 Sarah Kliff at Vox has been on this beat for a while and has a great viz of comparative MRI costs. 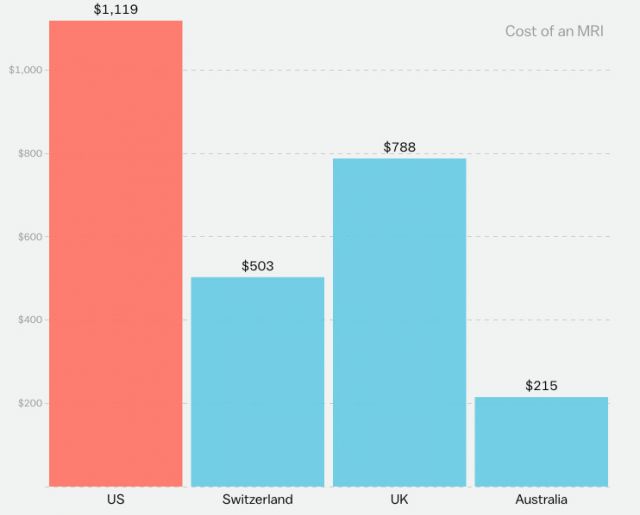 MRIs are a great example — the procedure consists of “push button” (I’m exaggerating). There is no reason it should cost five times what it costs in Australia!

Total health spending in 2015 was $3.2 trillion, of which public money represented $2.1 trillion. A little less than half of that is actual Medicare, Medicaid, or Veterans Affairs spending. The rest is government spending on private insurance for government employees, about $190 billion, and government subsidies to insurance companies and individuals via tax subsidies for employer coverage, about $300 billion.

We know that Medicare can negotiate much better prices for treatment because it is a larger payer. Scale that idea up —imagine how much better things would be if we had a single payer to regulate costs more effectively across all healthcare spending!

Right now, your private insurer only bears the costs of you receiving care. Because you are likely to change insurers in the future and eventually go on Medicare, they don’t actually feel the pressure to provide you care that keeps you healthy in the distant (and near) future. Instead, we all do — we all suffer when our friends and family get sick; our public money is allocated to care for people when they get sick.

So it makes perfect sense that the same actor who suffers when people don’t get preventative care — all of us, united, represented by our federal government — should be the actor who also pays for that care in the first place.  Because:

4) Once you have universal, single-payer health care, you can begin the work of actual health justice.

The actual goal of health reform isn’t just payer reform, universal expansion and cost coverage — those are just the beginning. The actual work is the social determinants of health. I’ve said this before and I believe every word of it:

Because the federal actor bears costs of providing care and not providing care, it can finally be a tool for realizing health justice. If your population is getting sick and dying because they don’t have a place to live, then housing is healthcare, and you build housing to bring healthcare costs down. If your population doesn’t have access to healthy food to eat, then food is healthcare, and you provide them with affordable food options to bring food costs down.

Does that make sense? I think that makes sense.

Some other questions that come up

Someone needs to do the extremely sexy work of standardizing medical data feeds and outputs.

What about the jobs of people who currently work in the insurance industry?

The easy, callous answer is “Well, at least they’ll have healthcare if they lose their jobs.” I’m not satisfied with that (even though it’s true). I also think it’s shortsighted. Much of the infrastructure in the insurance industry is still necessary. So why not reallocate these workers to the federal sector, where their labor goes to the good of all, instead of private profit?

Someone needs to do the extremely sexy work of standardizing medical data feeds and outputs. Here is a great way for people with hyper-specialized skills to be paid fair wages to design and implement that standardization. And, hell, we’re trying to fix a three-trillion-dollar sector here. It’s peanuts to build a work program to help those who might otherwise be left behind. Solidarity for all workers, including those whose skills are an invention of the payer-provider labyrinth.

What about doctor salaries?

I believe that the reduction in per-service costs (and the adoption of smarter standards of payment, like “pay for treatment” instead of “pay for specific service”) will be more than matched by an increase in people seeking affordable preventative care, so most physicians will find their compensation to be fair.

But that might not be a perfect argument. Ultimately, some physicians will find their total compensation reduced— mostly specialists, who have been unfairly privileged in price increases over time. (Primary care physicians and rural medicine doctors, on the other hand, are due for a compensation increase relative to median American physician salaries — which are, it should be noted much, much, much higher than salaries in other countries…)

One of the reasons physicians need high salaries is because they graduate ten years of education with $300,000 in student debt and 7 percent of compounding interest. That’s two decades of paying off debt. How cruel!

So I think there is room in universal single-payer healthcare for tuition relief and/or free medical training for doctors, nurses and other essential health providers. Relieve their pressure to be locked into a career path and insurmountable education debt in exchange for fairer salaries. This should be a net better result for everyone.

What about hospital revenues? Won’t they fall year over year?

That’s the wrong way to think about it. Consider “Roemer’s Law” — if a hospital builds a new bed, it will be filled. So much of hospital annual revenues are ER and inpatient admissions that don’t necessarily need to happen. Those admissions could have been prevented with preventive care or screening, or affordable care in clinics closer to home. Those procedures often could have been handled by a less specialized physician at home or in a local clinic. It’s not about cutting spending, it’s about reallocating spending to better places and making sure it ends up in the hands of people providing care.

This article was adapted from Timothy Faust’s health care newsletter. You can sign-up to receive Tim’s mailings at tinyletter.com.