“El Barrio belongs to the people that live here,” said Diana Vega a member of the Movement for Justice in El Barrio, speaking to residents of East Harlem on Sunday at a rally organized by the group to decry unchecked growth and gentrification in their neighborhood.

At issue is a proposed rezoning plan for East Harlem championed by Mayor Bill de Blasio’s administration that would allow construction of high density residential and commercial properties as a tall as 35 stories. Opponents of the plan, put forward in the city’s Uniform Land Use Review Procedure application, caution it is the first step towards allowing luxury high-rise developments that will displace longtime tenants and squeeze out local businesses in favor of wealthy newcomers and pricey cafes and boutiques. Rather than rezoning, they are demanding the city adopt initiatives to preserve housing for low-income tenants.

Some of the new developments under de Blasio’s plan would be required to have a percentage of affordable units based on the area median income or AMI, but not enough to squelch the rising tide of gentrification, say opponents of the plan. According to the city, the yearly AMI for the New York metro region, which includes Westchester and Putnam counties, is $85,900 for a three person household. Estimates of median family incomes in East Harlem range from $23,000 to $33,000 a year.

“We don’t want luxury housing,” said Teresa Lopez, an El Barrio resident who was among the crowd that gathered at the corner 117th and Lexington. “We want to keep our homes, our shops and our beloved barrio.” 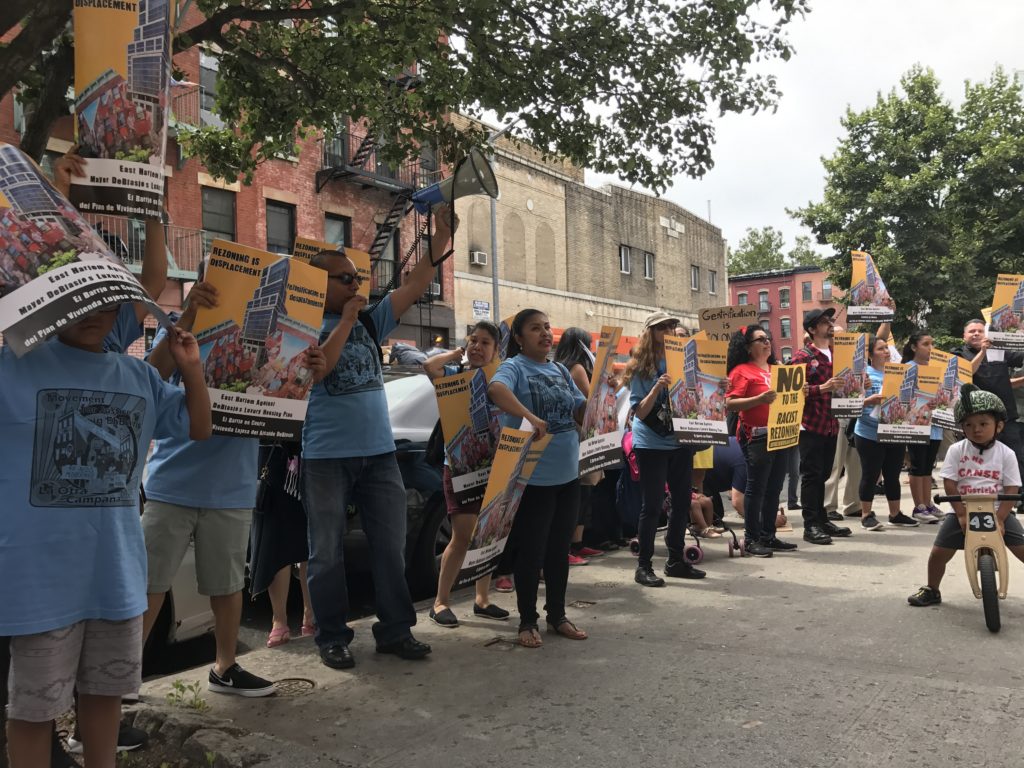 Housing activists near Melissa Mark-Viverito’s home on Sunday. (Photo courtesy of the Movement for Justice in El Barrio.)

The Mayor’s rezoning plan must be approved via simple majority through the City Council before it can proceed and Mark-Viverito’s vote is crucial to its passage. Mark-Viverito, who serves as Speaker of the Council, is politically close to the Mayor and has historically seen eye-to-eye with him on housing issues.

The councilwoman helped craft the initial East Harlem Neighborhood Plan but many of its recommendations, including a call for at least 50 percent of new units built in El Barrio to be affordable, are absent from the de Blasio administration’s current rezoning blueprint.

Manhattan Borough President Gale Brewer announced her opposition to the plan earlier this month, noting: “[T]he community gave extensive, thoughtful and informed input, but the administration could not see its way to support significant elements of the community’s recommendations, which forces me to recommend a disapproval of the application.”

“If this plan goes forward, there will be huge buildings that we can’t afford to live in.”

Brewer’s recommendation, however, is just that: a recommendation. The power to halt the proposal ultimately falls to Mark-Viverito and fellow council members.

In an email to The Indypendent, a spokesperson for the Speaker, Robin Levine, said Mark-Viverito shared the concerns raised by Brewer and by members of East Harlem’s Community Board 11 —  which voted against the plan through a nonbinding resolution — but stopped short of calling for it to be scrapped altogether.

“The Speaker is fully committed to preserving the vibrancy and character that has made El Barrio the thriving community it is today,” wrote Levine. “[A]s we prepare for the East Harlem rezoning to come before the Council, we look forward to a continued dialogue with the Administration and all stakeholders to secure an agreement that both meets the needs of existing residents and reflects the core goals of the East Harlem Neighborhood Plan.”

Yet, the El Barrio residents protesting on Sunday fear the outcome of any rezoning in the neighborhood will lead to mass displacement. In essence, Mark-Viverito, Brewer and Community Board 11 have taken the position of ‘no with conditions’ but many denizens of East Harlem don’t want to negotiate at all.

The Movement for Justice in El Barrio has put forward its own ten point plan to maintain housing affordability that it wants the city to adopt. It includes forcing landlords to make emergency repairs like fixing busted heating systems within 24 hours. It also calls for the creation of an independent commission with oversight over the Housing Preservation Department, in order to ensure that it enforces maintenance codes and defends tenants against neglectful landlords.

In the meantime, City Planning Commission is currently reviewing the rezoning proposal after which it heads to the City Council. Housing activists have vowed to continue to keep the pressure on Mark-Viverito and the Mayor.

“If this plan goes forward, there will be huge buildings that we can’t afford to live in,” said Rubin Hernandez, a Movement for Justice in El Barrio activist. “We would have to leave our barrio of East Harlem.”