The Indypendent
Menu
A Free Paper for Free People
The Proactiva crew on the waters of the Mediterranean this summer. Credit: Edu Bayer.

BARCELONA — Images abound of migrants from the Middle East and Africa piled atop each other in small boats adrift on the Mediterranean Sea. By the time the refugees step aboard these flimsy boats they have already been traveling for months or even years from places like Senegal, Ivory Coast, Nigeria, Syria, Afghanistan, even Bangladesh. They have crossed multiple borders with the objective of making it to Europe, leaving behind the horrors of war, torture or poverty.

“The only way to get away is through the sea,” Óscar Camps, founder Proactiva Open Arms, told The Indypendent.

The Spanish NGO was founded in September 2015, as the European refugee crisis began to mount. The group specializes in rescuing people who need help in the Mediterranean sea, as well as raising awareness of the injustices migrants encounter along their route, which often go untold in the media.

“When we rescue people at sea, there may be 110 men and nine women, but these numbers aren’t the same ones at the beginning of their trip,” Camps says. “Many women don’t make it to the end. The most vulnerable people in this whole story are children and women. Women have a certain value on the market. They become sexual slaves in brothels.”

Unlike the larger NGOs Proactiva collaborates with — Migrant Offshore Aid Station (MOAS), Doctors Without Borders, SOS Mediterranee — Proactiva’s founders are lifeguards, saving lives at sea is what they specialize in and know how to do best.

The group’s origins began with the image of Alan Kurdi, a Syrian boy who washed up dead on the shore near Bodrum, Turkey. Journalist Nilüfer Demir´s September 2015 photograph of the three-year-old lying face down on the sand went viral and moved people, Camps among them, who until then had not realized how deadly the refugee crisis had become.

Initially focusing on the Aegean route from Turkey to Greece, Camps and a friend pooled their savings, approximately $18,000, and traveled with a team of fellow lifeguards to the island of Lesbos offering their help. Thousands of refugees fleeing the Syrian and Afghan wars were seeking to reach Europe. Before the trip, Camps and his team had worked as lifeguards on the beaches just outside of Barcelona,  a day job Camps has kept even while running Proactiva. They made the switch from saving tourists to saving refugees off the Greek shore.

Camps was astonished at the scant help being offered by the United Nations and the European Union, and how little information people in Western Europe were receiving about the refugees. “I thought that the UN and the EU were important and serious organizations,” he said. “Turns out that the EU is a piece of crap with a flag made up of 12 stars and that the U.N. is conditioned by 150 countries that simply veto each other. We realized that all these organizations that we trusted have been useless. When a humanitarian crisis like this happens, they ask for money and won’t go to the affected territories until they get it,” he said.

After an agreement between the European Union and Turkey in 2016 in which Turkey was paid to take back the refugees from Greece, Camps started to shift his attention to the humanitarian crisis occurring closer to Spain, off the shores of Italy. Proactiva raised funds for a boat to help the organization reach refugees’ dinghies before they sank between Libya and southern Europe. Aware that many of the NGOs that were already at sea only had funds to maintain their missions during the summer, the Proactiva also rented a Dutch fishing vessel for the winter. The number of refugees traveling during the colder months decreases but there are still many people who risk their lives on the frigid waters for a more affordable price from smugglers. Recently, a Spanish businessman gave Proactiva a tubboat that can handle both winter and summer weather and can carry more passengers. 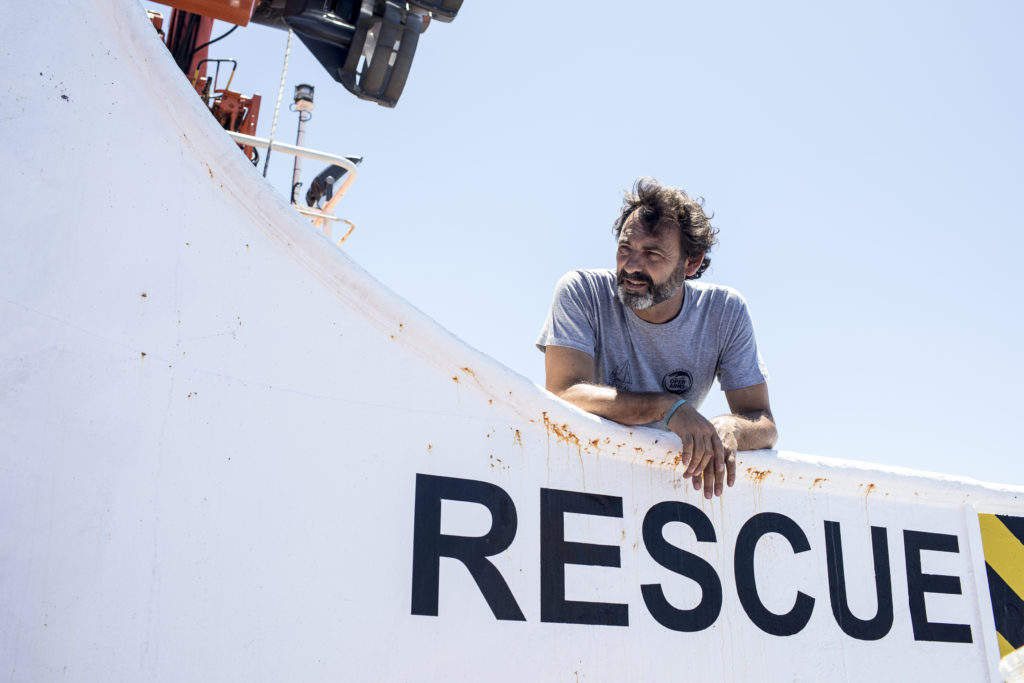 Saving migrants at sea has proved to be a bit more complicated than on the beaches of Spain due to the sheer number of people who need help.

“Initially, we always tried to get to the children because they were the first ones to drown,” Camps said. “Later, after seeing the images of that day broadcast on TV, the children that we had rescued were standing alone crying because nobody had rescued their parents. These were children left in a new continent, with a religion that wasn’t theirs, where people spoke a language that they didn´t know. They became vulnerable to whatever situation might come. That’s when we realized that we were doing it all wrong. After that experience we decided to rescue whole family units. That at the same time means we let whole groups of families die. We will have to live with those decisions for the rest of our lives. You don’t remember everyone you save but you remember those you saw die.”

In the last year and a half, over 200 volunteers have passed through the NGO, and there is a current waiting list of over 3,000 people who want to join — all of them are doctors, nurses, lifeguards, boat captains, boat mechanics or cooks. Volunteers drop everything they are doing in their day-to-day lives to join the rescue missions, which last 15 days at a time at sea. Each volunteer is provided access to psychological assistance. Camps explained the psychological toll the rescue work can take: “When you’ve been able to save 400 people and take them out of the sea you feel so proud and unstoppable but initially you don´t know if you are going to be able to save everybody or if you are going to have to drag 37 corpses out of the water.”

Proactiva has now been operating for almost two years thanks largely to public donations. Members of the NGO recently came to New York City to receive an award from the Abraham Lincoln Brigade Archive and the Puffin Foundation for human rights activism. The $100,000 prize, along with all donations to the group, go towards gas for their boats and water, milk, blankets and clothes for refugees rescued. Camps says thousands of people have been saved this year alone thanks to the group.

Raising awareness of the refugees plight is the other side of Proactiva’s mission. During trips at sea, Proactiva brings journalists along to document the plight of refugees on the open water. Reporter Andrew Katz, traveling with photojournalist Santi Palacios, recently wrote for Time Magazine about what he witnessed on the Mediterranean with Proactiva: “One hundred and eighty-one people were crammed into a rubber dingy meant to hold significantly fewer souls off the coast of western Libya on July 24. By the time the Spanish rescuers arrived the next day to the severely deflated vessel, 13 people, including two pregnant women, were dead.”

One of the women was the mother of three children who were also in the vessel. She died from inhaling the fumes coming from the engine.

Proactiva and other NGOs seeking to rescue the migrants aren’t the only boats searching for refugees in the Mediterranean. Right-wing organizations like Defend Europe accuse humanitarian organizations of collaborating with smugglers to send refugees to Europe. Defend Europe has launched a boat of its own, the C-Star, seeking to repel the refugees. Ironically, at least 20 members of the boat’s crew were deported when the ship docked in Turkish Cyprus in July, after authorities discovered they were Sri Lankan migrants. In August, protests prevented the boat from docking in Tunisia.

There is no easy solution to the refugee crisis facing Europe and the world. Missing Migrants Project reports that 5,143 people died crossing the Mediterranean last year, victims of conflicts and human trafficking with few other options for survival. Camps hopes that the number of fatalities will decrease this year, not simply because of his work but because international institutions will step in to help stop the conflicts and prioritize the lives of civilians before they are forced to flee their homes.

Camps says he started Proactiva in order to end it, meaning he wishes the work his organization performs were not necessary. Still he is a “completely” changed man since he helped found the group. “It’s like when you turn a sock inside out, it’s a completely different sock,” said Camps. “I am much more tolerant and much more of an activist … Your ideas and principles are the things you have to defend and the things you have to preserve.”

Photo (top): The Proactiva crew on the waters of the Mediterranean this summer. Credit: Edu Bayer.