“Isn’t it astonishing what immigrants will go through to survive?” gently comments Alicia, the main character in The C.O.R.E. Alicia speaks to us from the year 2032, where an evil dictator named Solomon has taken over the last remaining habitable islands on Earth, forcing the remaining queer migrants to toil and suffer brutal repressive conditions.

The film The C.O.R.E., along with Echoes of Iemanja, are two of latest features from SupaFriends and Youth Breaking Borders, youth media programs at Global Action Project (GAP). SupaFriends, who created The C.O.R.E. is a TLGBQ (transgender, lesbian, gay, bisexual, queer) youth film collective. Youth Breaking Borders is made up of predominantly immigrant youth, and authored Echoes of Iemanja. The films will be released online on GAP’s Youtube channel and a talk-back webinar will take place on Sept. 8th.

GAP was founded in 1991. While many of the young stars of these two films were not yet born, they are heirs of that time. It was in that year that the first Gulf War was staged on television sets in our living rooms, and some months after that the entire country witnessed the police beating of Rodney King, which ultimately lead to the Los Angeles rebellion of 1992. In both instances, media was completely transformed from fantasy to reality and back again. In many ways, the DNA of our current social media movements developed in that period.

These themes of colonialism and institutionalized racism are ones that the young people of GAP know too well and are willing to play with through the lens of what GAP calls transformative media organizing (TMO). TMO centers the narratives of those most marginalized — Black and Brown immigrants and TLGBQ youth — and gives them the space and support to engage in creative process around their experiences. And the results are phenomenal.

The C.O.R.E., like all great science fiction, speaks to us about today’s most pressing moral questions. The film asks, how do we bring to the fore the millions of displaced migrants and equally displaced TLGBQ youth? How do we create meaning in a foreign place? 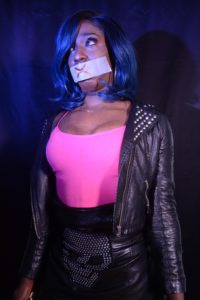 Alicia, one of the protagonists in SupaFriends’ film The C.O.R.E., is a gifted hacker who fights for the rights of immigrants and TLGBQ people. Credit: Adam Setton, SupaFriends/GAP.

The C.O.R.E. echoes Lizzie Borden’s 1983 classic Born in Flames, as a covert crew of TLGBQ youth seek to overthrow the authoritarian Solomon, and draws inspiration from writers like Octavia Butler in putting forward an imagined future based on lessons from the past. Indeed, The C.O.R.E.’s foundation is its own alternative history of queerness. When the rebellion is hatched at an underground trans and queer party in a basement, one cannot help but think of the experiences of that other queer riot, Stonewall.

The film resounds like a fire alarm, when just last month — that’s right, not in 2032 but 2017 — we saw white supremacist rallies, a ban on trans people in the military and the pardoning of a sheriff who was recently convicted for contempt of court after failing to follow orders from a federal judge to cease racially profiling Latinos in Arizona. As there is a push, both in The C.O.R.E. and in reality, toward increased surveillance, monitoring and repression of historically marginalized communities, the film boldly urges those impacted to come out of the shadows and resist.

While The C.O.R.E relishes in its campiness, Echoes of Iemanja falls on the other side of the spectrum. It is a sweet and earnest narrative that resembles a vegan sandwich, all the good stuff without the cheese. This story centers around Iris, a young Haitian immigrant whose dreams of attending college are dashed by the reality of her undocumented and now controversial temporary protected status. Trapped between this fact and her mother’s pressure for her to become a lawyer, she finds new meaning during a visit of Iemanja, the Yoruba Goddess of water and life.

“You couldn’t find the beautiful things in the sea,” the young goddess Iemanja beckons. “That’s why you are here. You were taught how to play in the sand and now you forget how to swim. You thought you were from one, but you are from two.”

The beautiful scene reminds us of the constant pull and push of the im/migrant experience. The youth producers stated that the inspiration for the film came out of conversations in which they reflected on the power of cultural memory and traditions to transform reality. Seeking new life on a different shore, they are reminded of their lack of citizenship and belonging.

“In the struggle against colonialism, cultural memory wholly inspires, sustains and institutes the material conditions for revolutions,” says Jesus Villalba, GAP’s media educator for Youth Breaking Borders. “Echoes of Iemanja resulted from a need to seek sources of strength and power beyond the conditions of the current political climate. Black history is a constant source of inspiration and guidance.”

The process of making a film that centered on Black actors also allowed Youth Breaking Borders participants to reflect on the way Black people have historically been framed, lit and depicted on camera, including the racialized development of film technology and its weaknesses in rendering dark skin legible. “It was interesting when Jesus said ‘our camera is racist, it loses focus on darker people,’” said Mehak Rao, a youth producer of Echoes of Iemanja. “I was shocked.”

What these two films show us is that the youth today have no choice but to tell their stories, remix them, join the resistance, retain their cultural memory and roots and create a map forward: for home.