Seventeen years ago this week, the staff of The Indy published its inaugural issue during the waning months of the Clinton administration.

Today, we’re launching a new giving platform with Patreon that makes supporting muckraking journalism easier and more affordable than ever. Chip in and make The Indy even stronger. 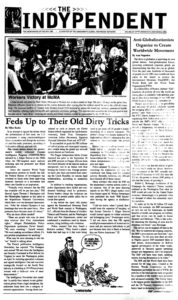 A scan of an early issue of The Indypendent, circa 2000.

Our early issues weren’t much to look at — four black-and-white pages with scrunched up text and tiny photos — but we were convinced we could do a better job of telling the story of radical social justice movements in New York City and beyond than larger, more complacent media outlets.

If we had realized at the time how difficult it is to publish a newspaper on a shoestring budget year after year, we might not have tried. But we persisted and from there we never stopped. Here we are, all these years later, still publishing while much of the newspaper industry has crashed and burned around us — most recently, the Village Voice, which will soon discontinue its print edition after 62 years.

What accounts for the fierce devotion of so many Indy volunteers and readers over the years? I think the answer lies in the larger media landscape, in which a handful of enormous media corporations dominate public life. In such a setting, this paper stands out as a rare media institution that belongs to “us.”

“The Indy reminds us that we exist,” as the best-selling author Naomi Klein put it.

But while our continued survival has been something of a miracle, surviving isn’t enough. Since Donald Trump’s rise to power last fall, we have responded by placing outdoor news boxes across the city and have more than doubled our circulation to over 30,000 papers per month. We are now able to amplify the voices of social movements like never before. Your support will help us as we strive to reach 50,000 papers per month by early next year.

Embracing a multi-media world we could have scarcely imagined 17 years ago, we are also publishing more original online content than ever before on our new website while producing podcasts, short videos and an e-newsletter as well. We do all this on a shoestring budget where we make every dollar go as far as it can. However, a free press is not free.

We need your support now to help us continue growing and thriving. Genuine independent media has never been more important. Stand with us today!

Our first 17 years have been pretty remarkable but there is much more we can accomplish.

You can sign up to become a monthly contributor for as little as $2 per month at our new Patreon page. Giving through Patreon is quick and easy and in return we have many amazing gifts to share with you — Indy bumper stickers, posters, a subscription to the newspaper, a copy of Naomi Klein’s latest best seller, dinner with myself and other members of our staff.

With the support of readers like yourself, our best work lies ahead of us and we will be able to reach more people with it. Thank you for everything you do to make that possible.

— John Tarleton is Editor-in-Chief and a co-founder of The Indypendent.