The author of Leaves of Grass is now wandering in the woods upstate. A walking, life-size bronze figure of Walt Whitman in Bear Mountain State Park, New York, celebrates the legacy of his poetry. Unveiled in 1940, the monument by Jo Davidson is located only a few miles outside the city. The park, which hosts a museum dedicated to the Appalachian Trail and a zoological garden, provides a perfect scenery to the author’s effigy. Carved on an adjacent stone, lines from Whitman’s Leaves of Grass honor the literary accomplishments of this native New Yorker. 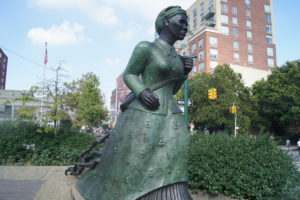 The Harriet Tubman Memorial is a portrait sculpture of the Underground Railroad’s heroine and a landmark of Harlem’s community. This dignified work by Alison Saar stands at the intersection of Frederick Douglass Boulevard, West 122nd Street and St. Nicholas Avenue. Unveiled in 2008, the larger-than-life bronze sculpture bears witness to Tubman’s accomplishments as a freedom fighter: Born into slavery in 1822, she rescued approximately 70 enslaved people and led them to the North. The position of the two-ton monument, facing south, honors the frequent trips that Tubman, risking her own freedom and life, made to save fugitives from slavery. 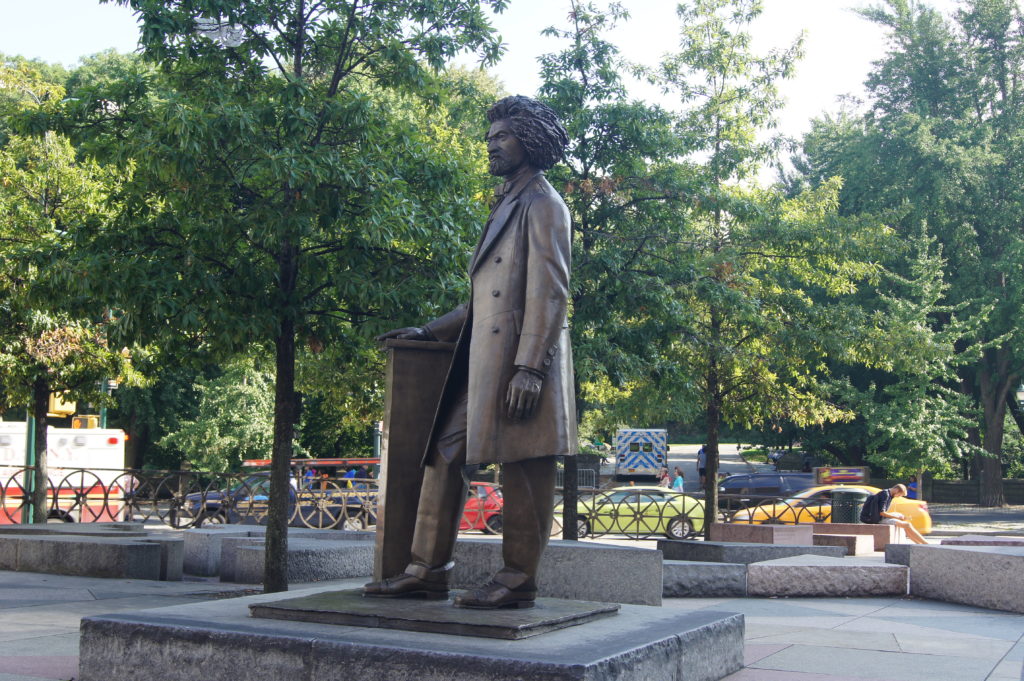 Overlooking the boulevard that carries his name, the Frederick Douglass memorial is a monumental complex designed by Gabriel Koren and inaugurated in 2011. The heroic-scale bronze figure honors the memory of this abolitionist leader and intellectual who fled slavery as a young man and settled in the North, where he became one of the most influential African Americans of the 19th century. Located at the northwest corner of Central Park, the monument is accompanied by his writings carved on granite blocks designed by artist Algernon Miller.

“THE RIGHTS OF MAN AND THE RIGHTS OF WOMAN” one of them reads, “ARE ONE AND INSEPARABLE, AND STAND UPON THE SAME INDESTRUCTIBLE BASIS.” 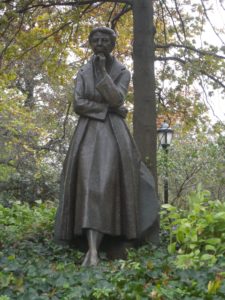 In many respects, Eleanor Roosevelt lived as momentous a life as her husband Franklin Roosevelt. She redefined the role of women in an era when the ceiling wasn’t glass but solid as the timber over the American domestic nest. Fiercely independent, Roosevelt was a vocal champion of rights for workers, women and minoritized populations. Located inside Riverside Park at West 72nd St. and Riverside Drive, in Penelope Jencks’ depiction of her she leans in thoughtful repose — a tribute to a woman whose boundless energy was matched by a fervent intellectual prowess. 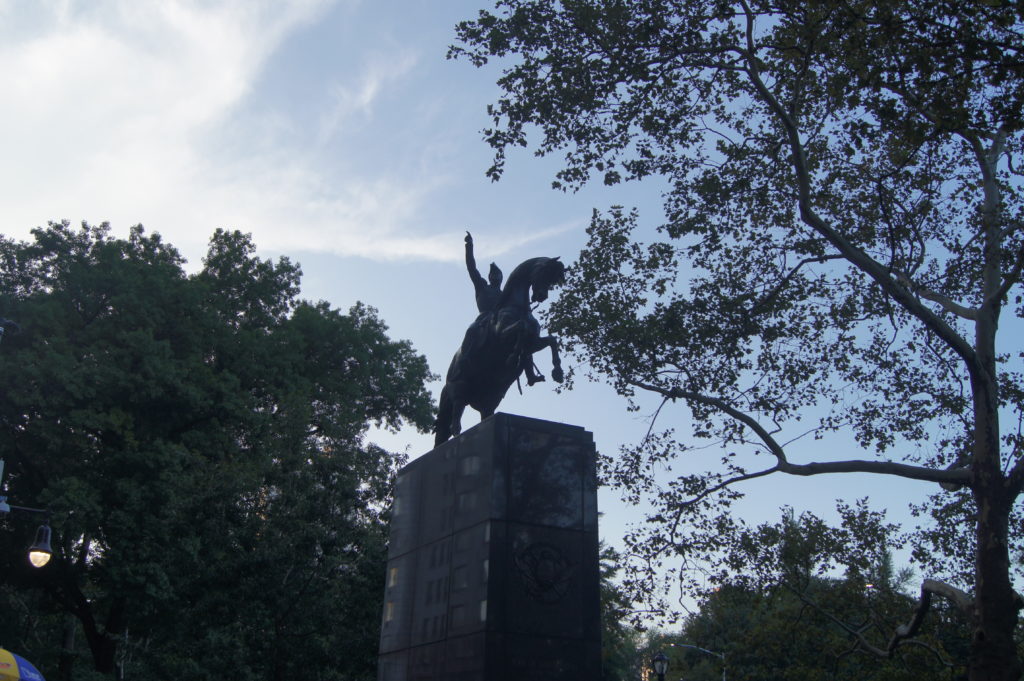 The apostle of Cuban Independence has had his memorial on Central Park South since 1945. José Martí’s monument, designed by sculptor Anna Vaughn Hyatt Huntington, is a bronze equestrian statue dedicated to the Cuban revolutionary who fought for the island’s independence from Spain. In the 1950s, the Cuban government donated the statue’s granite pedestal, but the monument’s unveiling had to be delayed until 1965, due to the tense political divide between pro- and anti-Castro New Yorkers. 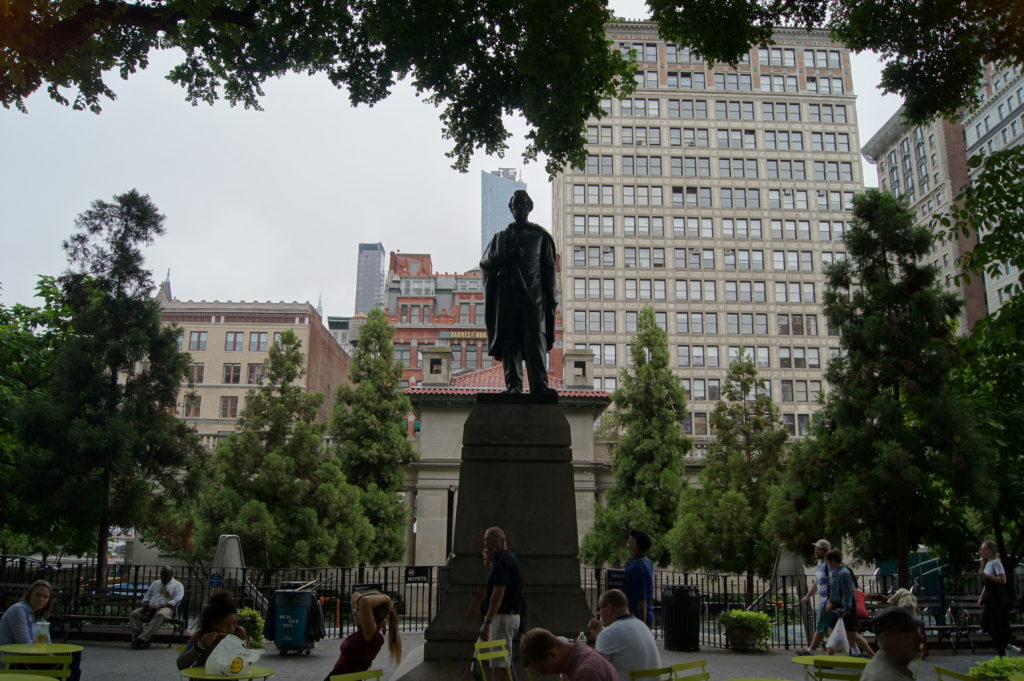 While Confederate monuments are unwelcome symbols of white supremacy, there is comfort in knowing General Lee and his buddies got their asses whupped. Meanwhile, quietly standing vigil where two busy paths intersect on the north end of Union Square is a statue of the man who guided the North to a crushing victory over the Confederacy and formally ended 246 years of legalized slavery in this country. A similar Lincoln statue, also produced by Henry Kirke Brown, stands watch over the Prospect Park Concert Grove. 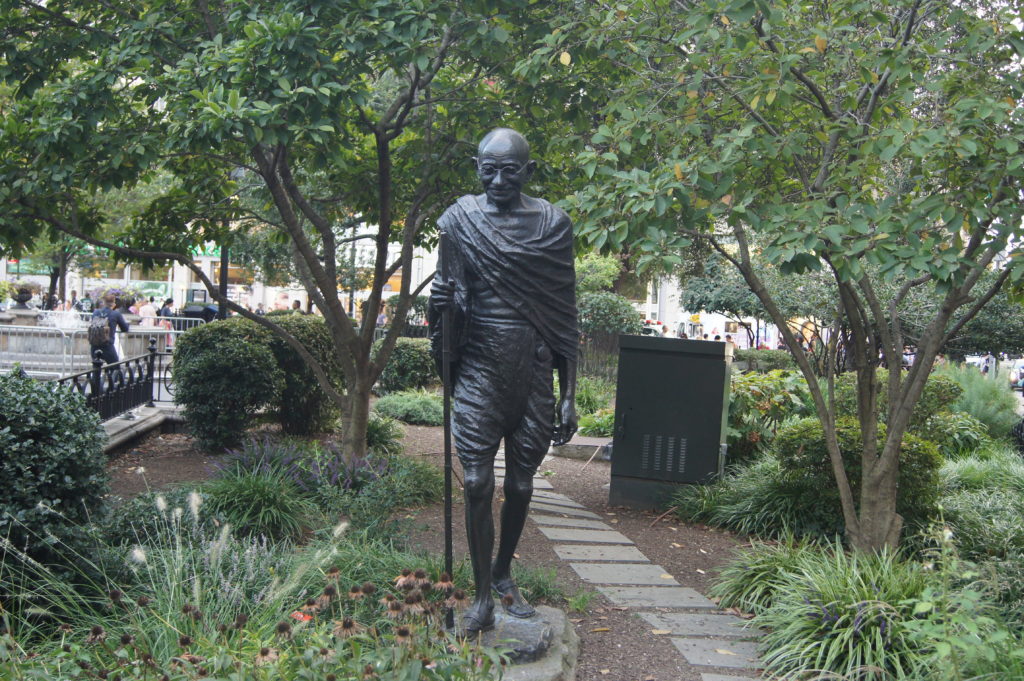 Described by Bruce Kayton, author of Radical Walking Tours of New York City, as “one of the few statues in New York City devoted to someone who hasn’t murdered anyone,” Mahatma Gandhi’s monument has stood in Union Square Park since 1986. Installed as part of a $3.6 million program that turned Union Square into a more upscale area, the statue of the champion of nonviolence seems to lead a silent resistance of sorts. Presiding near the Hare Krishnas’ gatherings in the southwest corner of the square, the statue’s bronze torso is often seen adorned by floral crowns on spring days. 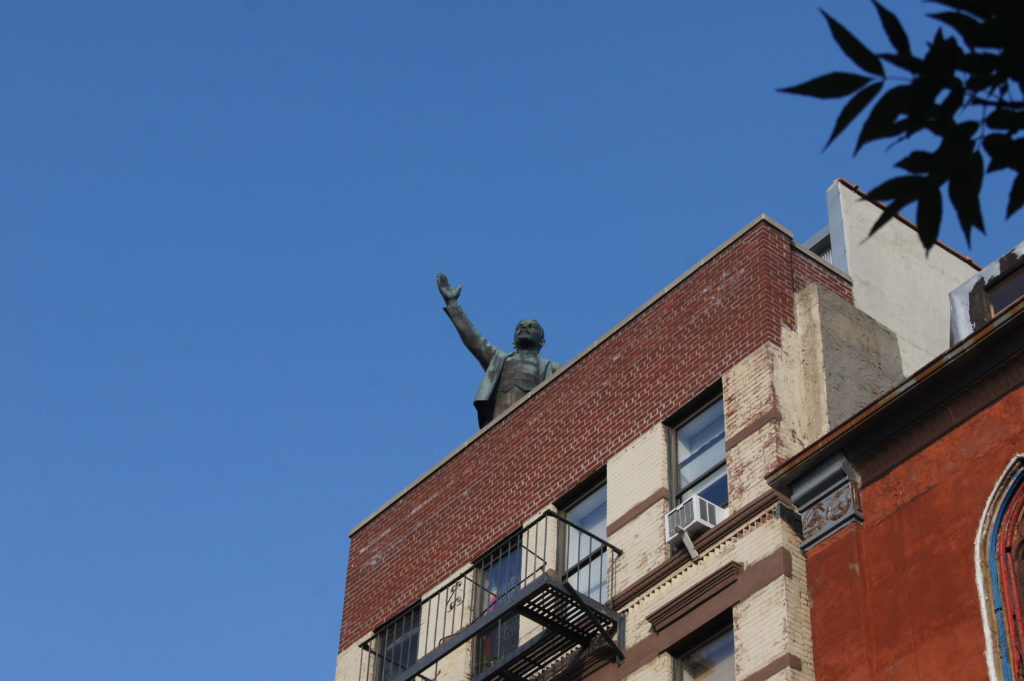 A heroic-sized statue of Vladimir Lenin was kept installed atop the Red Square luxury condo building on East Houston Street for 20 years by the building’s owner. When the complex was sold for $100 million in 2016, neither the dizzying figures of the sale nor the legacy of McCarthyism managed to expel the Communist leader’s memorial from the city: Lenin has found a new home in the Lower East Side, where a crane lifted the bronze statue to the rooftop of 178 Norfolk Street. 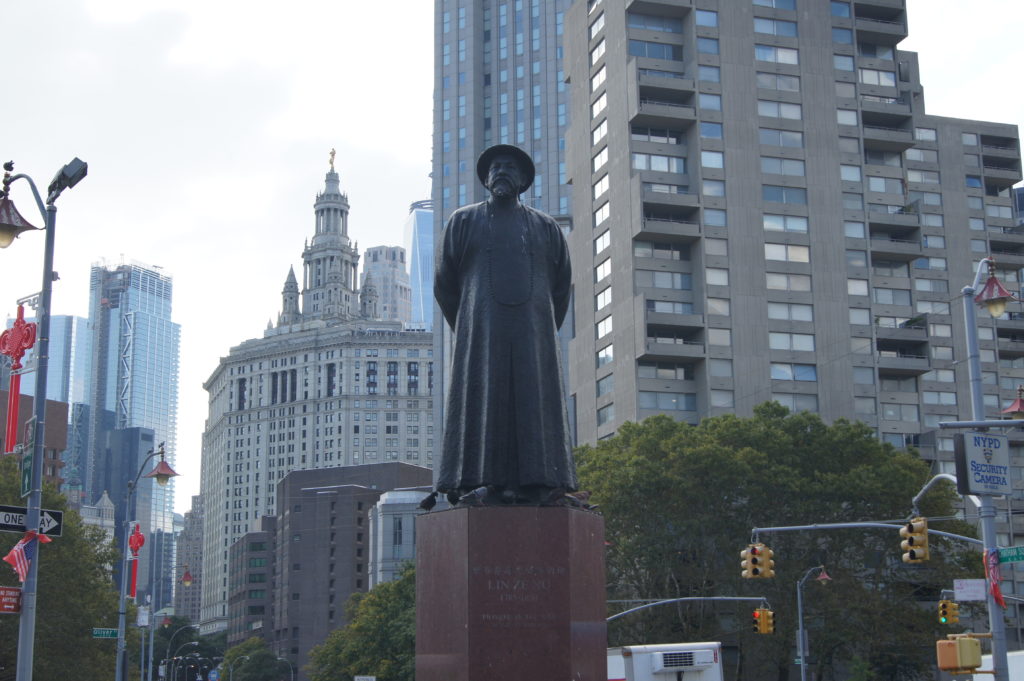 South of Canal Street, monuments of Confucius and Lin Zexu voice the various identities of Chinatown.

The first statue, standing in the middle of Confucius Plaza since 1976, was donated by Taiwan’s Republic of China. The 15-foot bronze depiction of the tradition-minded Chinese philosopher, sculpted by Liu Shih, was presented by the Chinese Consolidated Benevolent Association to commemorate the U.S. bicentennial.

On the other side of this stretch of Bowery stands a very different figure from the one of China’s old sage: Lin Zexu. The Qing Dynasty official helped to ignite the Opium War in 1839 by seizing British opium imports. This anti-imperialist symbol, born in the Fujian Province, embodies the ascending influence in Chinatown of immigrants from mainland China. Significantly, the legacy of this cultural divide between backers of mainland China and Taiwan is still visible today.