The Indypendent
Menu
A Free Paper for Free People
A young participant in a 2015 Ramapough-Lenape gathering. Credit: WhatsAllThisThen/Flickr.

The health of 20 million people could rely on the survival of a small indigenous tribe in New Jersey.

The Ramapough-Lenape people have inhabited the New York region going back well before Europeans arrived. However, thanks, in part, to a campaign launched by a young Donald Trump, the Ramapough have never been granted federal tribal recognition. Now, a behemoth piece of oil infrastructure, planned to stretch for 178 miles from Albany, New York to Linden, New Jersey, threatens to destroy what’s left of Ramapough land — and potentially contaminate 90 percent New York City’s water supply.

“We’ll either last another thousand years or get wiped out entirely,” said Ramapough chief Dwaine Perry, describing the stakes posed by the Pilgrim Pipeline for the tribe to the New York Times.

Proposed in 2014 by Pilgrim Pipelines Holdings, the $1 billion pipeline will carry 200,000 barrels of Bakken crude — the most explosive variety of oil — every day through land considered sacred by the Ramapough.

The Pilgrim will cross 257 streams and water bodies, including New York City’s Catskill and Delaware aqueducts. Even a minor spill could contaminate the water supply of the most densely populated area of the country. As the permitting process for the Pilgrim Pipeline finalizes, New York City residents are mobilizing in defense of the region’s early inhabitants, among them, a nascent group of scientists turned activists.

“As engineers, we are always concerned with safety factors and the risk of human error [when it comes to] the construction of these massive infrastructure projects,” said Jamie Bemis, a city planner, mechanical engineer and member of Science for the People, which hosted an event on Sept. 23 that was aimed at informing the general public about the pipeline. “I’m telling you, there’s going to be a spill: it’s not a matter of if, it’s a matter of when,” said Bemis.

Water contamination is not the only hazard posed by this project. There is also the issue of oversight. The Pipeline and Hazardous Materials Safety Administration employs just 208 inspectors, who together with 345 state inspectors are charged with overseeing more than 2.7 million miles of pipeline. The Pilgrim Pipeline will pass through 30 New Jersey towns and 25 New York municipalities will be overseen by one inspector every 20.000 miles. In this scenario, the communities along the pipeline’s route would bear all the burden of its risks without sharing any profits.

Despite concerns raised by environmentalists, Pilgrim Pipeline Holdings offers a different version of the facts. A section on the company’s website titled “Environmental Benefits” boasts that the pipeline will replace polluting forms of oil transportation such as oil trains and barges with a more environmentally friendly system. Seemingly oblivious of pipeline-related disasters like the 2013 Pegasus spill in Alabama or 2010 Enbridge spill in Michigan, the company describes its planned infrastructure buildup as a boon for East Coast communities along its path.

The State of New York thinks otherwise. It documented 20 types of expected “significant adverse environmental impacts from the construction, operation and maintenance of the pipeline,” according to an environmental impact statement released in 2016. As the company proceeds through the permitting process, Pilgrim Pipeline Holdings will have to respond to these potential threats.

The Ramapough Nation, though, isn’t stranger to environmental health threats. From 1967 to 1971, Ford Motor Company dumped industrial waste in the woods of Upper Ringwood, where many Ramapough families live. The site was declared safe by the Environmental Protection Agency in 1994 only to be re-listed as a Superfund site in 2006. Local residents have experienced above-average rates of lung and cervical cancer, as well as asthma, miscarriages and skin conditions, which they attribute to the pollution. Currently, New York University is researching the lasting health impacts of the waste dump with the help of members of the Ramapough Nation.

At the Sept. 23 event, Science for the People, which takes its name from a now-defunct publication where Stephen Jay Gould and other notable scientists cut their political teeth throughout the 70s, promoted the idea that scientists can be an allies to and advocates for human rights movements. 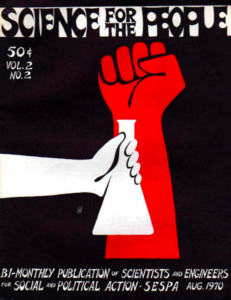 An early issue of Science for the People.

“Our goal is to revitalize an organization founded around the principle that science should serve human need as opposed to corporate profit,” commented Conor Dempsey, one of the founding members of Science for the People’s newest iteration. “The March for Science earlier this year raised a clear awareness that science is being attacked … We think we have to contest actively what science does in our world.”

The organization is planning more events, including an Oct. 27 meet-up at Verso Books’ loft in DUMBO on the eve of the #Sandy5 march over the Brooklyn Bridge, marking five years since Superstorm Sandy. The march is part of a budding resurgence in environmental activism brought on by recent hurricanes that have highlighted the threat posed by climate change.

Pilgrim Pipeline Holdings is currently awaiting permits from New York and New Jersey and has not set a construction deadline. Meanwhile, the effort to halt the pipeline continues alongside the Ramapoughs’ struggle for survival. Having survived centuries of colonization, extermination and racism by their white neighbors, the Ramapough could have something to teach a new generation of activists fighting for the environment.