On Sept. 28, just over one week after Hurricane Maria swept through Puerto Rico, Gov. Ricardo Rosselló signed an executive order that exempted government agencies from obeying laws that regulate contracts with private companies until 90 days after the “emergency ends.” The suspension of the requirements and contract laws is justified in the order by the need for a rapid response in the face of the emergency.

But before Hurricane Maria, Puerto Rico was in the middle of another storm — restructuring its $74 billion debt load under Title III of the federal “Puerto Rico Oversight, Management, and Economic Stability Act” (PROMESA). The law, signed by President Barack Obama in 2016, imposed a seven-member Fiscal Control Board upon the island, granting it domain over Puerto Rico’s finances. With the stated purpose of fixing the government’s deficit, the Control Board ordered cuts to services such as education and health, the privatization of public assets, increases in water prices and general austerity measures, without consulting the public or providing studies and economic projection models to justify the reasoning behind the austerity policies.

Now, in Maria’s wake, creditors and private contractors are eyeing Puerto Rico for ways to shake the desperate island down. Governor Rosselló has warned that the government could run out of money to pay public pensions as soon as the end of October, while the credit firm Moody’s estimates the cost of the damages caused by the hurricane will amount to between $45 billion and $95 billion. The latter figure exceeds the island’s current debt by $21 billion.

The economist José Caraballo Cueto, a development specialist and adjunct professor of statistics and finances at the University of Puerto Rico in Cayey, thinks the suspension of contract laws could be beneficial to the emergency response, but only if there is a widely announced bidding process.

“If they take advantage of the circumstances to benefit X or Y company, it may not be so beneficial,” Cueto told The Indypendent. The construction industry will benefit most from Maria, according to the economist, due to an injection of funds from the Federal Emergency Management Agency (FEMA). Puerto Rico’s tourism and agriculture sectors will suffer.

U.S. corporations have begun to arrive on the island, including energy and private security companies. According to Richard Ramos, executive director of the Electric Energy Authority of Puerto Rico (AEE), the hurricane destroyed 85 percent of the company’s transmission and energy distribution systems. Repairs could cost as much as $5 billion. AEE, in consultation with the U.S. Army Corps of Engineers, contracted Montana-based Whitefish Energy Holdings to repair transmission lines. They also awarded Weston Solutions from Philadelphia a $35.1 million contract to provide energy to the damaged oil-fired Palo Seco plant, which powers San Juan. On Oct. 10, the Army Corps of Engineers announced that it will be granting an additional $400 million in contracts to energy companies to repair AEE.

Contrary to President Trump’s remarks, instead of debt relief, debt is being piled on.

AEE was declared bankrupt under Title III of PROMESA in May due to its $9 billion debt load, now in the hands of hedge funds. BlueMountain Capital, Angelo, Gordon & Co., Knighthead Capital, Marathon Asset Management, the mutual funds Oppenheimer Funds, Franklin Templeton and the insurance company Assured Guaranty, are among the firms holding AEE debt. After the storm, the creditors offered a new $1 billion loan, which would have been given repayment priority under AEE’s bankruptcy process. The offer, however, was rejected by regulators with Puerto Rico’s Fiscal Agency and Financial Advisory Authority, a financial oversight body created in 2016, which saw the bondholder’s proposal as an effort to take advantage of the crisis and deepen the island’s debt.

Tesla, Inc. has also been in conversations with the government to reconstruct the electric system and the Federal Commission of Telecommunications (FCC) has granted an “experimental license” to Google so that it would provide cell phone services to islanders still grappling with Maria’s devastation. The private security company Academi, previously known as Blackwater, already has offers from the local and federal government and from the Red Cross to come to Puerto Rico. Meanwhile, masked men, with large guns and without identification, watch over the Citadel building in Santurce, property of the multimillionaire Nicholas Prouty.

Numerous victims of the hurricane, especially those on the interior of the island and outside of metropolitan areas, find themselves without electrical power and suffering from a scarcity of water and food as The Indy goes to print. They are still awaiting assistance from local and federal agencies and the more than 8,000 soldiers who were deployed to deliver aid. Many public employees still have not been able to return to work, while private companies are announcing massive layoffs over the radio.

In remarks on Puerto Rico’s debt made during a paper towel-throwing visit to the island in early October, President Donald Trump said, “We’re gonna have to wipe that out.” But the seemingly compassionate, if off-the-cuff comment, was followed by a $4.9 billion treasury loan to Puerto Rico, approved by the U.S. House of Representatives on Oct. 12, that the White House sought as part of a disaster relief package. Instead of debt relief, debt is being piled on. 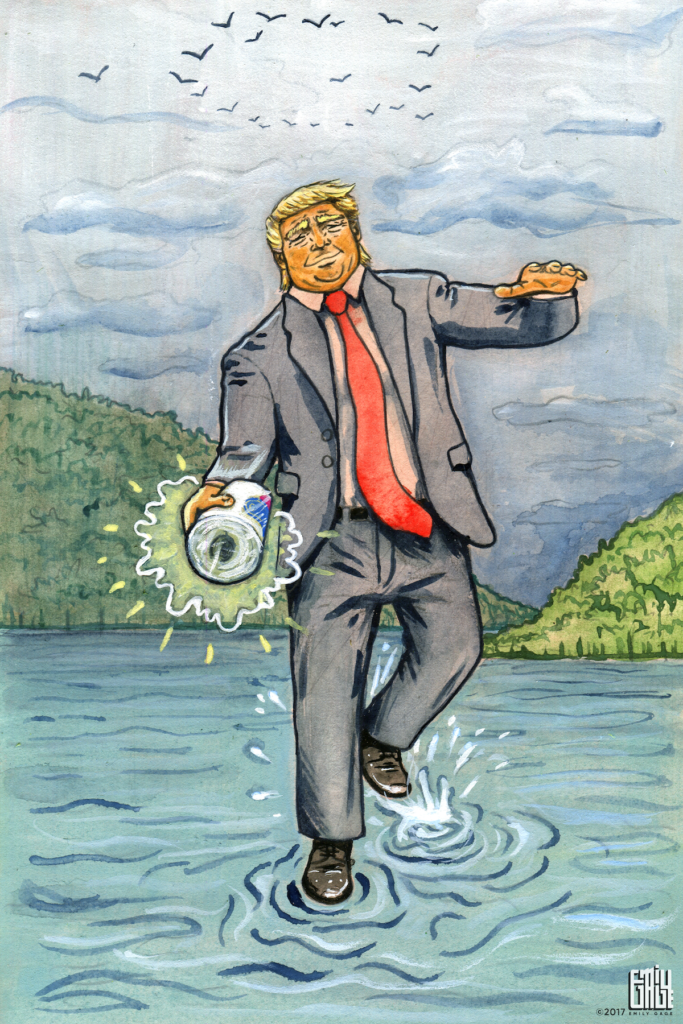 Meanwhile, the Fiscal Control Board has postponed plans to shorten workdays for public employees until the following fiscal year and authorized the government to put $1 billion toward the emergency response. But will the financial firms that are looking to recover debt from the island suspend their demands for payment? Or, will they usurp billions of dollars in public funds from an island where tens of thousands of homes lie in ruins, health facilities are barely functioning and electricity and telecommunications failures are a constant.

The principal players in the bankruptcy process under PROMESA are vulture funds, mutual funds, bond insurers and Wall Street banks. The Baupost Group, Aurelius Capital, Goldman Sachs and Tilden Park Asset Management are among Puerto Rico’s largest creditors. Many of these same firms profited handsomely a decade earlier by betting against the subprime mortgage market just before it tanked in 2007 and 2008 and helped to set in motion the biggest financial crisis in modern history.

The Electric Energy Authority could be subjected to an accelerated rate of privatization, while the hedge funds that hold government bonds may turn into investors in the reconstruction of the country’s infrastructure.

In a continuing lawsuit against Puerto Rico, Aurelius Capital — which holds $470,942,000 worth of Puerto Rican junk bonds — demands that the government use all available resources to pay back its creditors. Aurelius sued the government of Argentina for nearly a decade to force it to pay off the entirety of the debt the firm purchased at a discount.

Another group of creditors, including The Baupost Group and Whitebox Advisors, is seeking a portion of the revenues generated by island’s sales and use tax, which is not currently being charged due to the systemic collapse caused by the storm.

The federal judge presiding over Puerto Rico’s bankruptcy in San Juan, Laura Taylor Swain, postponed until further notice a general review of the proceedings that was set to commence on Oct. 4. But attorneys for Puerto Rico’s creditors on the mainland continue to submit motions in the bankruptcy proceedings, which are amassing in a digital archive while nearly all of the island is without light and or stable access to the internet.

As for the Electric Energy Authority, it could be subjected to an accelerated rate of privatization, while the hedge funds that hold government bonds may turn into investors in the reconstruction of the country’s infrastructure. A mass exodus of multinational corporations, wary of future hurricanes, is also expected

Given that Puerto Rico was expected to need 10 years to recover from its ongoing economic crisis even before the storm, I asked economist Caraballo Cueto how much further Hurricane Maria has set it back.

“It can set us back further,” he said, especially if the current debt payment blueprint and commercial restrictions, such as the Merchant Marine Act of 1920, remain in place. Also known as the Jones Act after the law’s author, the Merchant Marine Act mandates goods traveling on and off the island be transported by U.S.-owned, -built and -operated vessels. It drives the cost of everything from food to medicine up to 20 percent above prices on the U.S. mainland or on other Caribbean Islands.

If the Jones Act is eliminated, “economic recovery can move forward,” Cueto said. “The same happens if the local government decides to create a development plan that is not based on its current ‘laissez-faire’ model. That too, can bring us closer to a recovery.”

Joel Cintrón Arbasetti is a reporter at the Center for Investigative Reporting in Puerto Rico. This article was translated from Spanish by Georgia Kromrei.