In 1982, the year Blade Runner was released, climate change was a dimly understood phenomenon discussed by a few scientists. Set in 2019, it followed Decker (Harrison Ford) as he hunted down rogue replicants that had become discontent with the brief and limited existence they were given by their maker, Eldon Tyrell. The constant rain and gloom of its future Los Angeles gave the film a mysterious aura, the backdrop against which a dark fable about consciousness and freedom was set. Dystopian films were relatively rare back then, and the audience for them was narrow.

In 2017, when global-warming disasters are ever looming and droughts, forest fires and hurricanes are ravaging America, the backdrop of eco-collapse in the Blade Runner sequel doesn’t feel so much mysterious as terrifyingly plausible. Dystopia is no longer a niche-market notion, the speculative setting for a dark fable. Nearly every preview in the theater offers some variation on the theme of near-future doom.

For these contextual reasons as much as any flaws in the film itself (and there are several), Blade Runner 2049, is unable to quite match the mythic grandeur of its predecessor. It is as though the real world has caught up with the dark imaginings of Ridley Scott and Philip K. Dick, rendering the landscapes and situations of their fictions incapable of fostering the unsettling awe that is needed to create a work of great existential scope.

Don’t get me wrong, this is a worthy sequel. The cinematography is breathtaking, the sound overwhelming, the acting is mostly terrific (with the exception of Jared Leto) and the script is very, very good. By most measures, it is a tour-de-force. Despite all of its majesty, however, it cannot manage to ascend to the heights of a bare-chested Rutger Hauer, as Roy Batty, describing and lamenting his brief but miraculous life. 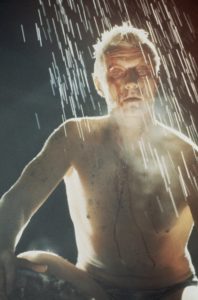 Blade Runner 2049 picks up in the aftermath of a replicant insurgency that has shaken the galaxy and taken down Tyrell Corp. in its wake. In its place stands Wallace Corp., with new replicants that have been rendered more docile and predictable, but no less capable. So capable, in fact, that replicants now perform as blade runners themselves. Replicants hunting replicants.

Ryan Gosling’s character, K, is one such blade runner. The film does a wonderful job delving into themes explored in the original, such as the role of memory, and thus story, in the construction of self. Gosling is effective and affecting as K pulls on thread after thread, unraveling the mystery of his origin, with the tantalizing possibility of him being a “real boy” dangled in front of him, egging him ever onward.

While the film does a wonderful job exploring some of the same themes as the first, its efforts at mapping new terrain feel either overwrought or ill-conceived. In the character of Wallace, for instance, the writers have created a villain that belongs in a James Bond movie, a creature of pure malevolence, completely inhuman in his aspirations and actions. Bad guys can be complex and interesting, and this film needed one of those — not a cartoon bad guy, who Leto plays cartoonishly.

The film’s real fatal flaw, however, is how it posits biological reproduction as the ultimate proof of “real” life. This makes little sense within the world of these characters, the best of whom were not born at all. The miracle of birth is posited as the golden chalice, the holy grail of being, end of story. Really? Is K really of less value than the biological progeny of a replicant?

The film doesn’t appear to be very interested in this question, which, if you ask me, is an insult to replicant-kind the galaxy over. Most of all, it is a profound insult to Roy Batty’s tears, shed in rain at the end of his brief existence in the original, which were no less a miracle than any human boy’s.