The Indypendent
Menu
A Free Paper for Free People
Illustration by Gino Barzizza.

When Amazon, the company that has expanded from dominating online book sales to chasing near-monopoly status in Internet retailing, announced in September that it was looking for a city to plop its second North American headquarters into, Brooklyn Borough President Eric Adams saw an opportunity. He teamed up with Andrew Hoan, president of the borough’s Chamber of Commerce, to pen a letter to the fat cats in Seattle.

“Dear Amazon: Ready, set, grow!” it begins. “Since Robert Fulton steamed and Emily Roebling bridged, Brooklyn has been getting ready for you.”

The pining Tinder screed went on to praise Brooklyn’s “world-class arts and culture, five-star foodie experiences, healthy workplace initiatives” and its “incredible transit access.” Yes, they were talking about the same transit system that Adams called for investigating four months earlier, in order to calculate how much its endemic delays cost in “lost economic productivity” and the “resulting impact to business in our city and state.”

“With several prime options along Brooklyn’s Innovation Coast already in construction, stretching from Sunset Park to Williamsburg, we can accommodate your immediate and long-term needs,” Adams and Hoan continued.

New York has joined a host of other cities across North America in submitting bids for Amazon’s $5 billion “HQ2” in advance of an Oct. 19 proposal submission deadline. The company has not, as of yet, stated when it expects to make its final decision.

Even if New York beats out contenders like Atlanta, Boston and Toronto, whether the company will establish a base in Brooklyn is anybody’s guess — although the borough’s spacious, increasingly deindustrialized waterfront gives it a decent chance. But Adams’ inability to keep his pants on at the prospect of the company’s arrival is indicative of our political class’s suck-up approach to all things silicon.

Adams spokesperson Stefan Ringel told The Indypendent it would be between Mayor Bill de Blasio and the New York City Economic Development Corporation (EDC) to decide what taxpayer subsidies and other incentives to use as bait, while City and State quotes an Adams spokesperson saying that “all ideas will be on the discussion table for a unique opportunity like this.”

Earlier this year, de Blasio announced plans to expand Silicon Alley from the Flatiron District south to Union Square. The name “Silicon Alley” is more of a metonym these days, since the arrival of Google in the Meatpacking District in 2013 and Facebook in the East Village the following year, but the mayor’s proposal to turn the site of the P.C. Richard electronic-appliance store on East 14th Street into a tech hub set off alarm bells among neighborhood residents, who have been clamoring for more affordable housing.

“I think every city should take a pass on HQ2. But I hope one of them does choose Amazon, because I don’t want them to double their size here in Seattle.”

Dubbed Civic Hall, the 258,000-square-foot development “will generate 600 good-paying jobs” on the city-owned property, the mayor’s office claimed in a February press release. It will “include a digital job training facility for all New Yorkers, and modern, flexible workspaces designed to meet the unique needs of early-stage startups in New York’s vibrant innovation economy.”

That announcement seemed to presage the Democratic Party’s new platform, unveiled this spring, which called for “better skills.” Critics of the push for new coders see it as a way of driving down wages in the tech industry, by flooding its labor pool. There’s also the issue of the widespread displacement the industry’s expansion brings.

“What we’re seeing in the blocks directly adjacent to the site is a stunning and overwhelming wave of development, some of it fueled by the expansion of the tech industry,” says Berman, whose organization seeks to protect the neighborhoods between 14th and Houston streets.

Numerous condo and office towers are in the works along Broadway, as well as a luxury hotel on East 12th Street and the recently completed “Death Star” at Astor Place — nicknamed for its imposing bulk and dark tinted windows. Whatever the merits of Civic Hall may be, the GVSHP wants the neighborhood’s current zoning laws, which date back to 1961, amended to tie new developments between University Place and Broadway to the preservation and creation of affordable housing. City Councilmember Rosie Mendez, who represents the East Village, has said she won’t sign off on the tech hub unless it is accompanied by such a rezoning, as has her near-certain successor, Democratic candidate Carlina Rivera.

“It is disappointing certain groups would use that project as a pawn to change unrelated zoning blocks away,” a spokesperson for the mayor told DNAInfo.

Affordable housing is the “kind of thing the Mayor says he wants,” notes Berman, “but here he is, standing in the way, saying ‘no’ to anything other than luxury high-rise development in the area…. If you look at places like Cambridge and San Francisco, the unchained expansion of the tech industry can fuel the fires of gentrification to an astounding degree. What we’re saying is, ‘Do it the smart way. If you’ve identified a spot for the tech industry to go, just make sure you are protecting the surrounding area.’”

Andrew Rasiej, the entrepreneur behind Civic Hall, has donated $4,950 to the mayor’s re-election campaign and $1,000 to Rivera. RAL Development Group, which is slated to build the tech hub, and its lobbyist, James Capalino, each made separate $10,000 donations to de Blasio’s Campaign for One New York charity, which disbanded last year after coming under investigation for its fundraising practices. David Lichtenstein, CEO of Lightstone Group, which is behind the luxury hotel slated for 12th Street, is another major de Blasio campaign donor. Lichtenstein is also on the board of directors for the EDC — which is overseeing the development on the P.C. Richard site.

Neither Rivera nor the mayor’s office responded to requests for comment.

Regardless of whether it locates its HQ2 in New York, Amazon is already expanding here. It announced on Sept. 21 that its advertising, fashion and Web-services divisions will be setting up offices near Wall Street, at 5 Manhattan West, after securing $20 million in tax credits from the Empire State Development Corporation’s (ESDC’s) Excelsior Jobs Program. Amazon is also opening a warehouse — or in the digital age’s Orwellian market-speak, a “fulfillment center” — on Staten Island, for which it will receive $18 million in tax relief from ESDC. 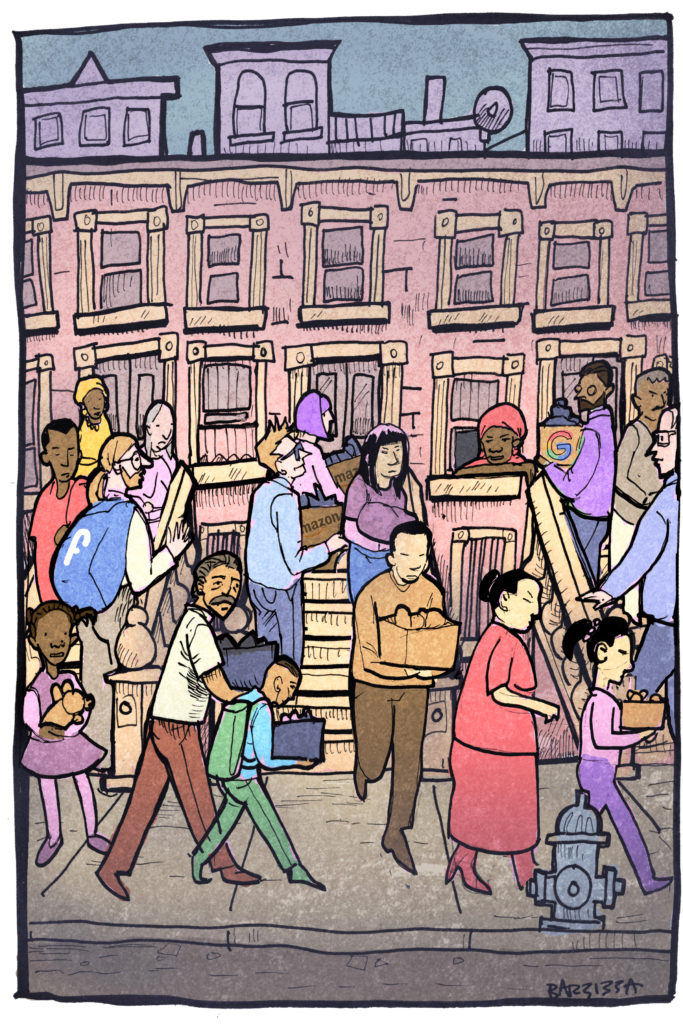 Amazon has long been dogged by accusations of mistreating its workforce. It has sabotaged unionization drives and subjected workers to security screenings that have added as much as an hour of unpaid time to each workday. Amazon kept an ambulance on call at a Pennsylvania fulfillment center because that was cheaper than preventing heatstroke by putting in air-conditioning. The company’s cruelty has not been limited to its blue-collar employees, either. “Nearly every person I worked with, I saw cry at their desk,” a former employee at its Seattle headquarters told the New York Times in 2015.

Public officials from Adams to de Blasio and Gov. Andrew Cuomo argue that the tech industry brings economic growth and jobs. But what kind of growth and what kind of jobs?

“I think every city should take a pass on HQ2,” says Jeff Reifman, a Seattle tech blogger and former Microsoft employee. “But I hope one of them does choose Amazon because I don’t want them to double their size here in Seattle.”

Amazon’s Seattle-based workforce has grown from 5,200 employees in 2010 to more than 40,000 today. It has pursued a classic monopoly strategy, undercutting competitors’ prices in order to gain market share. The company isn’t so much concerned with making money as it is with making sure other retailers don’t. Despite being the world’s third-largest retailer after Walmart and CVS and having $482 billion in market capitalization, it made just $252 million in profits in the third quarter of this year. Some years it hasn’t made a profit at all.

Amazon’s rise in Seattle, cautions Reifman, has been accompanied by increased overcrowding, the widespread displacement of longtime residents and a general “erosion of the quality of life.” Average rents and the number of people sleeping on the city’s streets have both more than doubled. The company’s massive investments in growth have not substantially improved Seattleites’ incomes. More than half of city residents earn less than $50,000 a year and a quarter make less than $25,000. Unlike Seattle, New York has rent-stabilization laws and policies that require some new buildings to meet an affordable-housing quota, but those haven’t been enough to stem the tide of hypergentrification already underway here in Empire City.

Who stands to gain from the arrival of a second Amazon headquarters?

The biggest beneficiaries, as with the tech hub near Union Square, would be developers. Rudin Management, Forest City Ratner, Rubenstein Partners and Jamestown Properties have formed an alliance, joining with Borough President Adams to lobby Amazon. Rubenstein Partners’ 500,000-square-foot property under construction at 25 Kent Avenue in Williamsburg is one option. Another is Jamestown’s Industry City, a 6-million-square-foot former industrial port on the waterfront in Sunset Park that has been converted to a campus for offices, artisanal-tchotchke makers and an avocado bar. It has drawn ire from the surrounding community over gentrification concerns.

Industry City CEO Andrew Kimball told the Village Voice in September that 6,000 people are currently employed on the campus, about half from Sunset Park and the neighboring communities.

“None of our documentation shows whether significant job growth took place as a result of Industry City,” responded Doug Turetsky of the city’s Independent Budget Office. “It’s hard to tell if the company brought anything to the neighborhood — besides $25 coffee.”

Ryan Chavez of UPROSE, a Sunset Park-based environmental-justice group, says his organization would like to see development in the neighborhood, but Industry City is precisely the opposite of what the historically immigrant community needs. Jamestown is “looking to turn an industrial hub that has for decades served the working class into a playground for the privileged,” he told The Indy. “They’ve opened the floodgates to the commercialization of our entire working waterfront.”

Chavez must have missed the memo: It’s called “Innovation Coast” now, according to Adams and his developer allies.

Jamestown is applying to rezone Industry City — currently the largest privately owned industrial site in the New York area — in order to accommodate a luxury hotel. UPROSE has a different kind of innovation in mind. It wants the city to do more to ensure that Brooklyn’s waterfront preserves its manufacturing jobs by encouraging the development of new, green industries, such as producing solar panels, that will help address climate change.

“The city should draw a red line around our industrial zones and not sign off on projects that directly undermine them,” says Chavez. “There should be a coordinated, interagency effort to identify and attract green business and foster their local development. These are blue-collar jobs that are going to be created somewhere. Why not put a community that itself is vulnerable to climate change to work?