Young Mexican computer programmers in New York are hacking instead of donating canned goods or waiting for the state to lead the response to the 7.1 magnitude earthquake that shook Mexico City and surrounding areas on Sept. 19.

Just hours after the earthquake struck, Miguel Salazar, director of Codeando México (“Coding Mexico”) — a group of self-described “civic hackers” focused on urban planning — rounded up a humanitarian team using the organization’s group chat. Membership in Codeando México has since ballooned to well over 2000 people. Most of the hackers are in Mexico, but many in New York are working frenetically alongside them to solve real-life problems on the ground in Mexico City and other areas affected by the earthquake.

There have been 362 deaths attributed to the earthquake so far, 221 of which occurred in Mexico City. Repairs on 549 buildings are underway, according to the city’s mayor, Miguel Mancera, but many more need to be inspected. In rural areas adjacent to the city, where residents have never before felt the effects of an earthquake, displaced people are organizing together and taking refuge in local greenhouses for warmth. Many of their homes, built out of adobe or cement blocks, were severely damaged. Others are on the point of collapse and are not habitable. Officials from Mexico’s ruling Institutional Revolutionary Party have attempted to discredit pleas for increased assistance in regions still grappling with the earthquake’s impact.

‘For our own survival, we need to come together.’

Meanwhile, members of Codeando México are harvesting data from Twitter users to better channel aid, digitally plotting under-mapped zones like slums and rural areas and creating a tool to give the public accurate information about organizations they can donate to.

A group of them, many of whom are college students attending schools here in New York, met on Sept. 23 in a dim room at Columbia University’s School of International Affairs. Improvised signs on notebook paper written in red and green ink marked the way down the halls to the “Hackathon for Mexico.” At the informal gathering, the programmers shared knowledge, coded together and met people with whom they had been working with remotely. 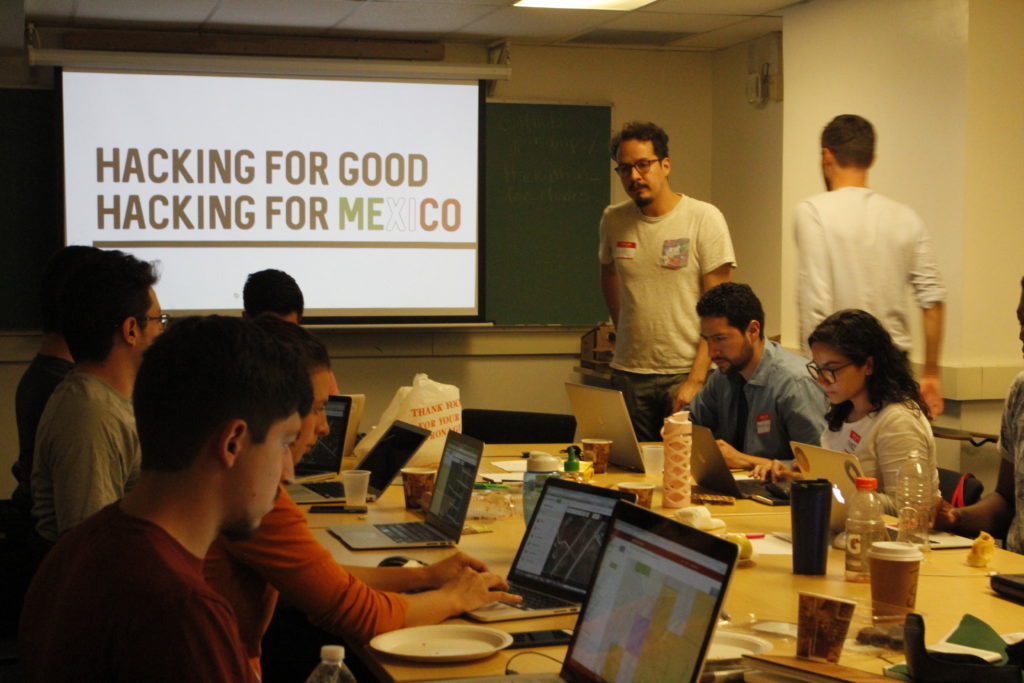 Luis Godoy, an organizer of the hackathon from Guanajuato, Mexico, was in a car on the way to the airport in Mexico City when the earthquake struck. He says he did not feel it. Instead, he saw buildings collapsing and people pouring out onto the streets. His phone began ringing with notifications from social media. After a four-hour delay due to a sinkhole that opened up at the airport’s newly built terminal, Godoy got on a plane for New York City.

“It was super frustrating,” Godoy said. “I thought of staying and helping. I knew it was a big one. It almost felt like running away from the problem.”

For Godoy and others at the hackathon, working with Codeando México is a way of assisting the recovery effort underway on the ground rather than wringing their hands at the government’s lackluster response.

Rashide Assad, who is from Jojutla, Mexico and grew up in Mexico City, says that the project she is leading with her colleague Raymundo Tamayo is focused on making sure people have the information they need before donating to the earthquake response, “ensuring that money you donate is going to be used, not taken advantage of.”

For most students, the hackathon is the first time they have met in person. Most of them are Mexican and cannot be with their families and loved ones. “It’s so strange to live this moment so far from your family,” said Assad. “Doing these things is also a way for us to care for each other.”

Later in the week, at a “mapathon” in Brooklyn, Sebastian Burgess used a projector to show a room full of people how to identify and trace buildings using satellite images. Each person was assigned a square of satellite imagery within which to draw the outlines of buildings — taking care to identify shadows and not to be distracted by extraneous structures like swimming pools, parking lots and gardens.

The work seems like minutiae, but a brief conference call from a mapping collaborator in Mexico assured the group that it has a direct impact on relief efforts in more rural areas outside of Mexico City that have been left forgotten. Afterward, the some 20 mappers in New York claps each time someone outlines a new building.

Dinorah Cantú-Pedraza, a gender non-conforming human rights lawyer from Mexico, works closely with a data team at New York University’s GovLab. She has been collaborating with Codeando México, connecting people and resources and contributing ideas for future projects, like a Twitter bot that connects users looking for their loved ones to Google’s people finder.

A similarly devastating earthquake — though not as severe — struck Mexico 32 years to the day of the Sept. 19 tremors. “The government said, ‘We can handle it’ and the people said, ‘No you can’t,’” said Cantú-Pedraza, reflecting on the 1985 earthquake. “We took the streets back.” Once again, civil society is mobilizing to fill in gaps in the state’s response. “Where are they?” asks Cantú-Pedraza. “I haven’t seen them. The same thing is mirrored in this disaster again. For our own survival, we need to come together.”

At the hackathon, two Mexican flags hung from the wall of the faintly lit room where the students gathered. One student offered me a “de la Rosa” marzipan candy, a peanut-flavored sweet ubiquitous in Mexico. Someone played Café Tacuba from their computer speakers, a popular band from Mexico City. The hackers sat typing, bags of fatigue gathering under their eyes.

The civil networks and community being built here aren’t going anywhere, says Rashide Assad. Not only will they stay friends, she insists, but they will remain ready to respond in radical and creative ways to the next disaster.