Long gone are the days when tens of thousands of people took to the streets across the United States to condemn the invasion of Iraq. But Operation Enduring Freedom — better known as the Global War on Terror — endures. Voices for peace, however, have remained steadfast all these years on, even as their numbers have diminished.

On Oct. 7, they marked the 16 year anniversary of the U.S-led invasion of Afghanistan and the beginning of the War on Terror with a “March to End these Endless Wars” in Downtown Brooklyn. The demonstration was followed by a vigil at Union Square in Manhattan that called for an end to U.S. drone strikes in Yemen and the American-sponsored Saudi campaign against its Houthi government. Approximately 200 people all together took part in the events.

The Indypendent spoke with participants in both gatherings, asking them why they took part in the protests, what keeps them going and what they see as next steps for the peace movement. 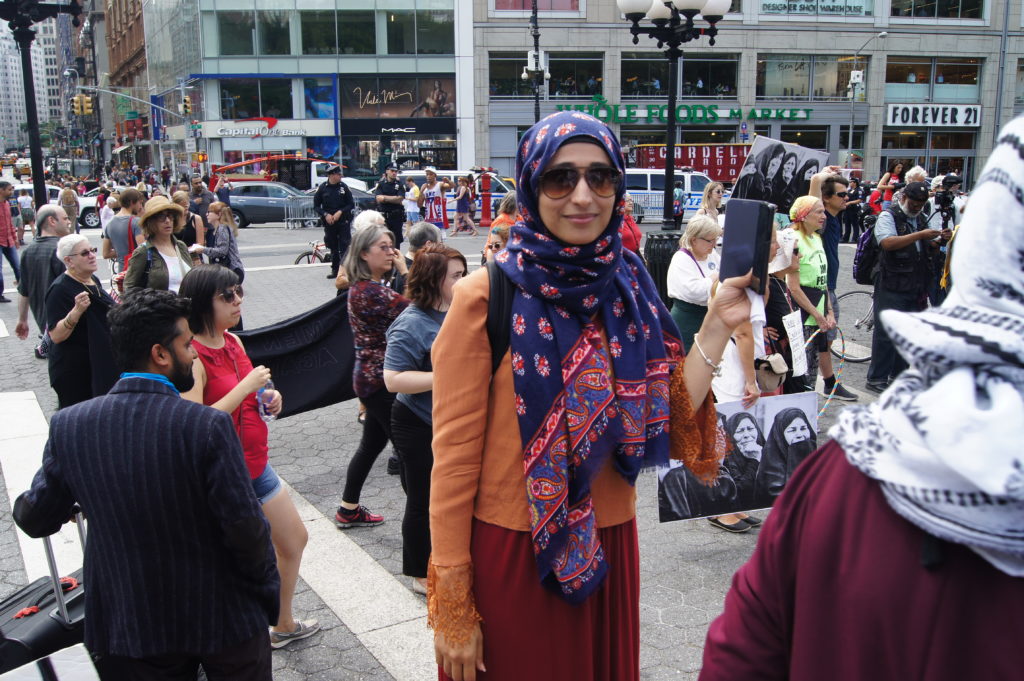 I gathered people in our Yemeni community to be here today. It’s heartwarming to see many people that are not Yemini, that are not Muslim and that care as much as we do about the war in Yemen.

I was living in Yemen with my children. Because of the bombings by the Saudis, there was no access to food and water was restricted. I came back to America. I was one of the fortunate ones. My family and my neighbors are still struggling in Yemen.

When we lived in Yemen and the war began, my children and I would sleep in the middle of the house. We didn’t want to be near windows. The bombings would happen and the doors and windows would shake. There was no water or electricity. There were days where there would not be flour to make bread. They hit factories that made milk. At times we had no access to anything. People were afraid. Once the bombing stopped, we would step out to see the damage and there were whole buildings that were gone.

How do I comfort my kids? What do I tell them? One of my children has anxiety attacks because of what she has grown up in.

A couple of years ago, people did not know anything about Yemen. We didn’t want to be known for war. 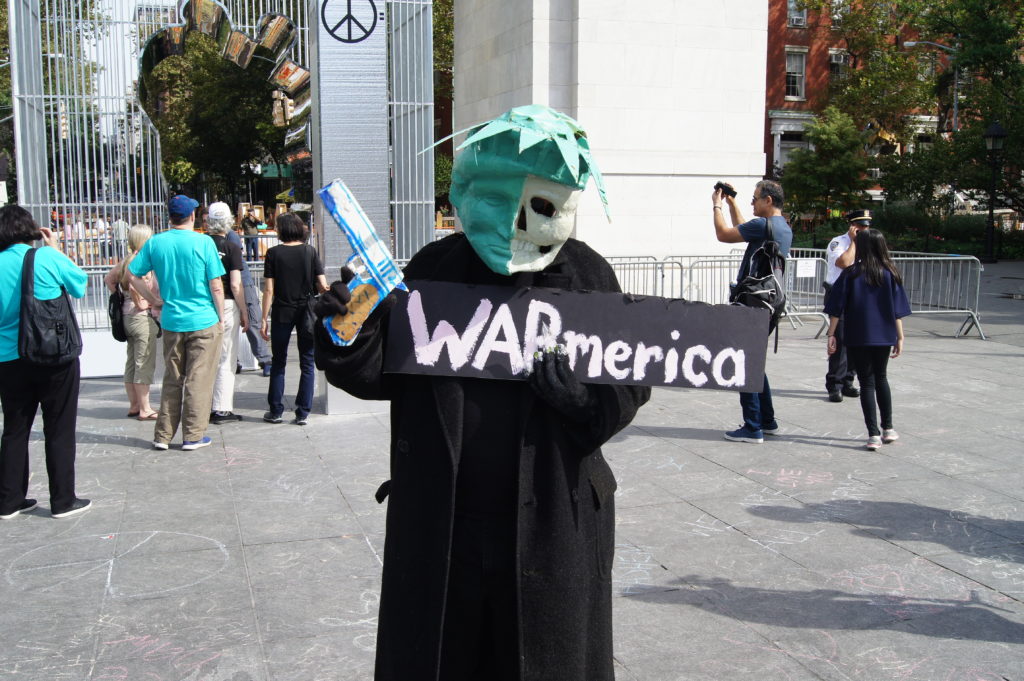 My costume represents the lost ideals of this country. America is floating on an ocean of blood. There has to be a very vibrant anti-war movement to counter the violence. America’s largest export is military equipment. The fact that we have children that have grown up while we have constantly been at war — it poisons our lives, it creates a negative reality for everyone. If you are endlessly at war it degrades your life. You are paying for the illegal, unjustifiable slaughter of defenseless nations. You cannot spread freedom with an invading army.

Sam Koprek, an organizer with Brooklyn for Peace 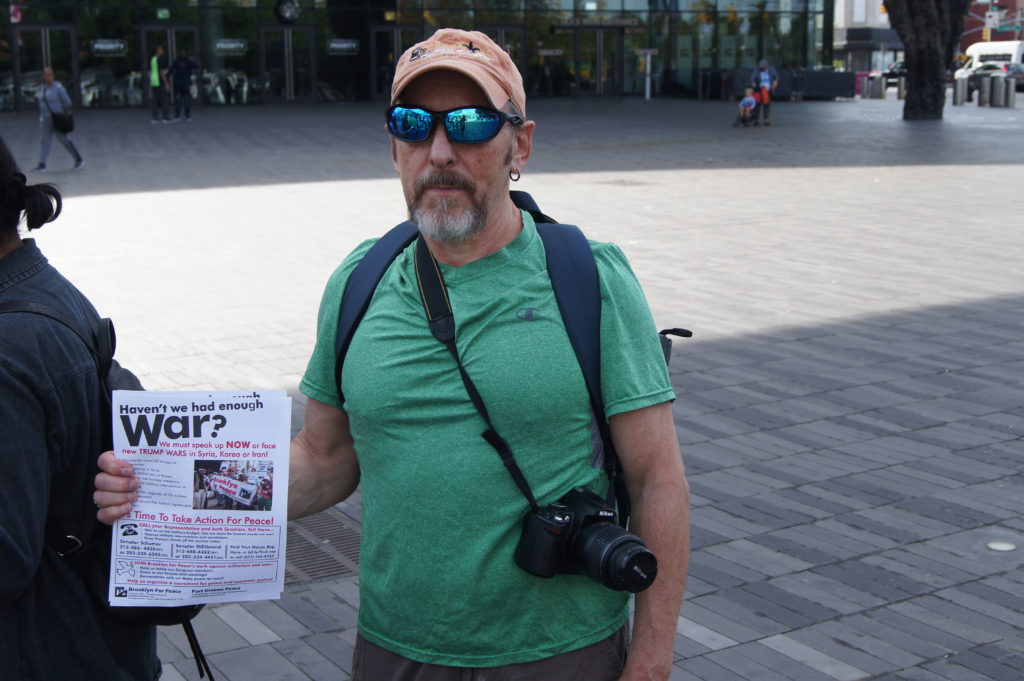 I was there in 68 for the Democratic Convention protests. At the time, the peace movement had much more people mobilized. There was a real sense of urgency that we had to stop the Vietnam War and, in general, the movement was a lot younger.

I remember Allen Ginsberg was on the stage in Grant Park. The police were lined up in full riot gear, ready to fire tear gas. Ginsberg was calling for everyone to chant “Om” as the police came into the crowd and started clubbing everyone.

Scenes like that leave a permanent mark on you and remind you why you must remain committed to the movement. It’s difficult to keep working for peace during a war that is 16 years long. Our protests had an impact during the Vietnam War and they can have an impact today. People are very jaded, and there are many distractions. If we saw the connection between an endless-war economy and the inability for the nation to provide substantive relief to its citizens, I believe people would see why protesting the wars is important. 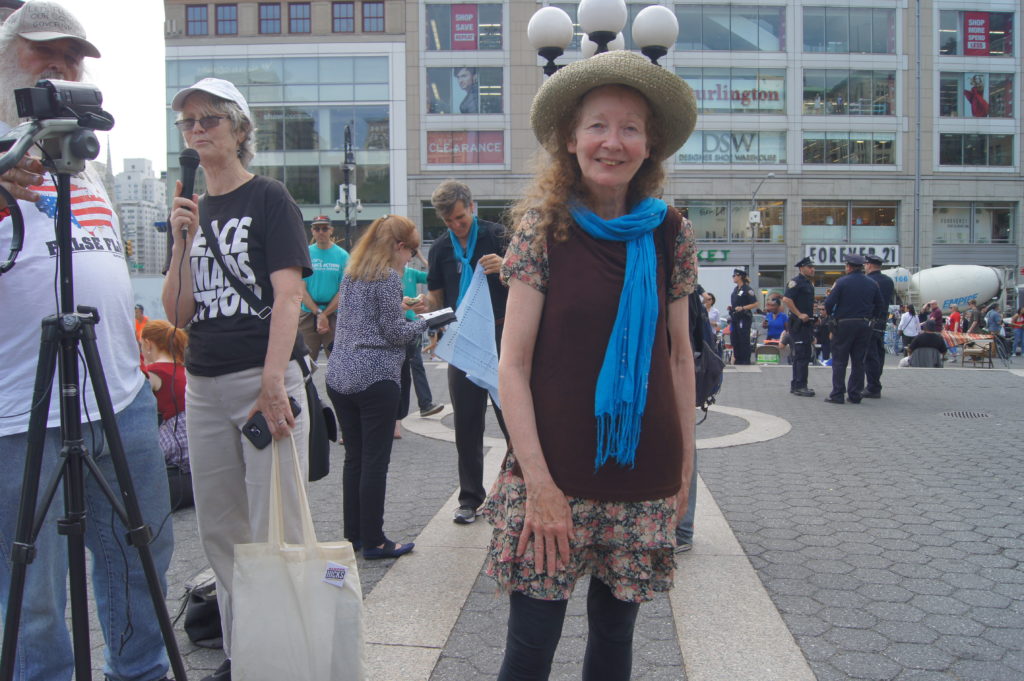 If you had asked me two years ago about this war Yemen I would have drawn a blank. Now, I understand a great deal more.

When the Saudis began to up the ante on their blockade of Yemen using Navy ships supplied by the United States, it reminded me so much of Iraq during the shock and awe bombings. I was someone who lived in Iraq and violated the economic sanctions many times, always in public.

People have become more sensitive to the various manifestations of war, the ways in which people who aren’t treated with dignity can, in fact, have voices that we need to hear.  We are always outspent and outmaneuvered by the military, the government, the think tanks. The peace movement needs people who can find the spare time to do the kind of study that creates informed arguments of our own. Alternative media is important because it puts a focus on issues that are otherwise nonexistent in the mainstream press, voices that would never be heard are vocalized. 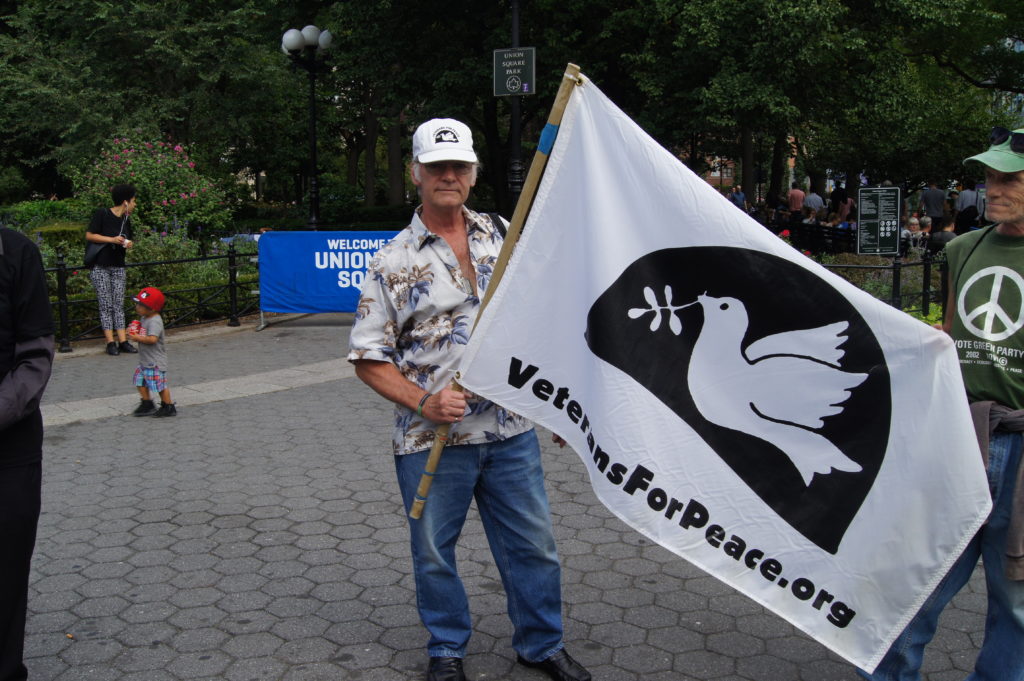 I am a veteran of Vietnam. I was there in ’64, just prior to the war getting crazy. I was drafted, but I can understand why people dodged the draft and went to Canada.

After the war, I sat on my ass like a lot of people. I became involved in the peace movement by listening to WBAI and reading Howard Zinn and Noam Chomsky. The peace movement is important because many soldiers are missing parts of their body or have mental problems. The state of veteran’s health in this country is just a horror show. Most people don’t understand that.

All photos by Dean Patterson.