The Indypendent
Menu
A Free Paper for Free People
From God Save the USA (2017), Jamie Reid.

Much is being made this year over the 100th anniversary of the Russian Revolution. And rightly so. For all the tragedy that later unfolded, the Bolsheviks reshaped the 20th Century and inspired generations of upstarts around the world. But almost escaping notice, the anniversary of another revolution has rolled around. While not on the magnitude of Red October, it was a revolt that, at least for me and the people I grew up with in Washington, D.C., was more impactful than anything that ever transpired in St. Petersburg, though it too took place an ocean away — not to mention nearly a decade before we were born.

It’s been forty years since punk exploded; forty years since the release of Never Mind the Bollocks, Here’s the Sex Pistols. The album was an October Revolution of sorts, hitting record store shelves in Britain on the 28th of that month, but, as with the revolution in Russia, pressure had been building for months, years even.

There was the release of the Sex Pistols’ first single the year before, “Anarchy in the U.K.” The track opens with “vocalist” Johnny Rotten declaring himself the anti-Christ, plotting the downfall of the nation and mocking capitalism over Steve Jones growling guitar and Paul Cooks pounding drums. “Your future dream is a shopping scheme,” Rotten hollers. Then came the Pistols’ appearance on the Thames Television program Today that December, during which Jones called the stuffily condescending host, Bill Grundy, a “fucking rotter” live on air. More singles followed in the run-up to the album’s release. Each showcased the band’s willingness to denigrate the symbols and institutions that formed the fabric of English life.

With bands like the Ramones, and the New York Dolls before them, punk had been brewing amid the urban decay of 1970s New York before the Pistols came along, but the Brits gave the genre what would come to be its defining attitude, one of complete distaste for respectability and pretension.

“God Save the Queen” is a punk manifesto if ever there was one. “We’re the flowers in the dustbin,” Rotten screams. “We’re the poison in the human machine. We’re the future, your future.”

Punk sprang from social hardship and class conflict, as Rotten later noted, reflecting on the dustbin those flowers sprouted from:

Early Seventies Britain was a very depressing place with both the Colour Strike and the U.K. postal workers strike in full swing. It was completely run-down with trash on the streets, and total unemployment — just about everybody was on strike. Everybody was brought up with an education system that told you point blank that if you came from the wrong side of the tracks … then you had no hope in hell and no career prospects at all.

Rotten proclaims right off the bat on “God Save the Queen” that Elizabeth II “ain’t no human being.” The song climbed nearly to the top of singles charts on the eve of the Queen’s Silver Jubilee. It was a symbolic dethroning, stripping Her Majesty of the reverence blindly afforded to her by her loyal subjects.

At his Soho shop in London, Pistols manager Malcolm McLaren, sold t-shirts designed by artist Jamie Reid, featuring the Queen’s face mutilated by a safety pin through her lips. Ironic, nefarious, subversive — the appropriation of what was up until then (and unlike today) a symbol of domesticity could be read as a sexist attack on matriarchy or a feminist takedown of the English conception of the feminine.

McLaren and Reid were students of Situationism —  a French hybrid of Gramscian Marxism and the surrealism that sought to disrupt cultural hegemony through art. With slogans like “Be realistic, demand the impossible” and “Under the pavement lies the beach,” the art movement rose to prominence for its propagandistic influence on the general strike that had rocked France nine years earlier. Before the Pistols, McLaren lived in New York and briefly managed the Dolls, dressing the band in red in an attempt to attract publicity by mocking America’s knee-jerk anti-communism.

The band’s image was “essentially dreamed up by McLaren and Reid and other people in their circle who were inspired by the events of 1968 in Paris,” David Ensminger, author of The Politics of Punk: Protest and Revolt from the Streets, told me. The Pistols never toted a political line. Rather, the nihilistic image they projected generated a shocking and revolutionary spectacle that opened up a space for questioning social norms, even if the band members themselves — perhaps with the exception of Rotten, Ensminger notes — never gave much of a thought to the theory behind the spectacle itself. They were working-class kids, relishing the opportunity to spit the face of society. Call it political rudeness that, in Ensminger’s words, “highlighted the fissures in the social strata.”

‘You’ve got yourself a punk president.’

Listening to Never Mind the Bullocks today, it is still as raw and, for the most part, funny as ever, despite the fact that many of social mores the band transgressed have long since dissipated. The treatment of mental illness and abortion on “Bodies” actually makes the band come across as conservative by today’s standards.

I recently had the chance to rub elbows with Paul Cook — he was in town promoting a new musical venture he’s launched with former bandmate Steve Jones — and I mentioned how the Sex Pistol’s caustic approach to publicity seems to have been revived by our  Commander-in-Chief, Donald Trump.

“You’ve got yourself a punk president,” Cook said.

And yet Ensminger cautions against a singular interpretation of what defines punk. “You could say, ‘Punks are assholes and [Trump’s] an asshole’ or ‘Punks are repugnant and he’s repugnant.’ But you could also say, ‘Obama is punk because he’s black and he’s breaking through the [White House] color barrier.’”

There are “multiple competing truths about what punk is ideologically speaking,” Ensminger elaborated. “But most of us would probably want to believe at least that, over 40 years, it has provided a personal, urgent and permanent counter-narrative to monoculture, hegemony, ‘the powers that be’ — this voice of dissent coming from a community that is democratic, participatory … Punks are anti-authoritarian, whether it’s the church, the state, the business, the school. And it’s an immersive DIY experience, where a lot of it is about being hands-on, doing it yourself, whether it is alone or within a community.”

The descendants of 1977 — the Dead Kennedys in San Francisco and Minor Threat in Washington, D.C., to cite just the tip of the iceberg — explored the terrain the Pistols opened up, developing a punk ethos within emergent underground scenes that sprouted up in their respective cities.

What skiffle had done for a generation of Britons two decades previously, creating a youth culture surrounding blues and folk music; punk did for rock and roll on a near-global level. It took the genre back to its basics. Anyone who knew three chords and had two friends could grab a cheap guitar and form a punk band. Inspired by seeing the Pistols perform, Joe Strummer formed the Clash. The band melded punk with reggae and funk, hybridizations that Rage Against the Machine and others later built on. 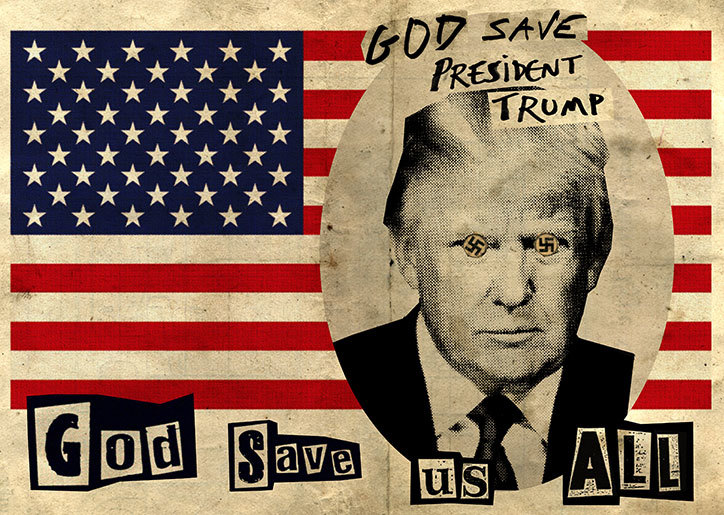 Meanwhile, punk’s culture of participation extended to political fronts. Attending benefit shows at clubs like the Phantasmagoric in Bethesda, Maryland and the Wilson Center in Washington’s Mount Pleasant neighborhood, I first began to develop a political consciousness as a teenager. Activist collectives like Positive Force in D.C. emerged from punk scenes from Tokyo to Los Angeles. Throughout the eighties and up to the present, money from punk benefits has funded women’s shelters, fed the homeless, renovated disused buildings and supported anti-war campaigns. The commercial success of the British punk band Chumbawamba in the early 2000s went towards funding the global Indymedia network, of which this newspaper is a byproduct.

Some have contended that punk is at heart conservative, that it represents a retreat from prog rock and other forms of musical experimentation prevalent in the 1970s. But avant-garde punk bands like Pere Ubu trouble that interpretation. And besides, I can’t think of many protest anthems with ten-minute guitar solos in them, can you? Nazi Punks and skinheads have always been outliers and when Johnny Ramone’s famously defended George W. Bush’s invasion of Iraq, few punks had his back. The distaste for respectability politics that the Sex Pistols’ helped promulgate is visible today on Trump’s Twitter account and in numerous “alt-right” Pepe memes. But it can likewise be spotted on the nascent dirtbag left, whose exponents have argued for embracing vulgarity as a political tactic rather than letting right wingers like Rush Limbaugh have all the fun.

As a subculture, there has always been a tension within punk between a rejection of the dominant culture, what Marxists call the superstructure, and a desire to transform it. “You have to scale up if you want to make huge social changes,” Ensminger told me. “But the Black Panthers weren’t huge and they made an enormous change to both popular and political culture. La Raza, the same thing. Dedicated subcultures really can make large impacts.”

Will punk last another forty years? Ensminger thinks so.

“We’re always going to want to return to punk,” he said. “It embodies the primal qualities we desire. You can only have so much digitized, layered, crafted, curated artificial beats … Punk speaks to all the individual trauma you are experiencing and allows you, with minimal effort, to participate in a response to it; whether it is creating a fanzine out of nothing or a blog, or learning two or three notes and the next thing you know you are up on stage. You go from someone being passive to someone who is a creator. It lowers the bar for participation, so you can jump into and stir up culture.”