Private jets are the preferred mode of transportation for members of Donald Trump’s cabinet, so it should come as no surprise that their operators and passengers are among beneficiaries of the proposed Trump tax cuts working their way through Congress this week. A new report from the Institute for Policy Studies (IPS) on the private jet industry and its powerful lobbying arm details the tax advantages fuel-guzzling luxury flight operators and their wealthy clientele enjoy at the expense of the rest of us.

Of particular note, the report highlights multiple exceptions the federal tax structure affords private jet flyers which we hoi polloi are subject to every time we buy an airline ticket and points to a new exemption in the current Republican tax bill under debate in the Senate.

As IPS’s Chuck Collins and Josh Hoxie note in their report, private jets are charged “21.8 cents per gallon of jet fuel or 19.3 cents per gallon for aviation gasoline” for each lift-off. That is higher than the rate commercial airlines are charged and it might sound like a lot but consider the taxes levied on the average flyer:

Commercial airline passengers, by comparison, pay a 7.5 percent federal excise tax on tickets, a $5.60 federal security surcharge, a $4.10 Federal Flight Segment Tax, and $4.50 Passenger Facility Charge. And that’s just on flights in the continental United States. International flights are subject to an $18 international arrival and departure tax while flights to Hawaii and Alaska are subject to a $9 tax. Also, if you happen to use frequent flyer airline miles to buy your ticket, you’ll pay a 7.5 percent tax on those miles. 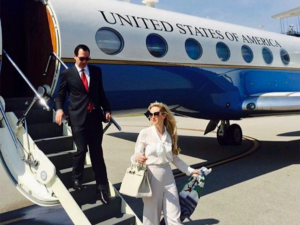 The current tax package under consideration in the Senate would exempt private jet management companies — which provide everything from a flight crew to jet maintenance for private-plane owners — from the 7.5 percent excise tax that commercial airline passengers pay every time they lift-off.

The Internal Revenue Service has already suspended collection of the excise tax after pushback from the luxury jet lobby. What the Senate bill does is codify the de facto exemption into law.

According to a 2016 report from the House’s Joint Committee on Taxation, the excise tax, if collected from the management companies, would net the government just $500,000 over ten years — a paltry sum considering that the federal budget is nearly $4 trillion dollars. But the question is this, especially given that the Republican-controlled Congress, in a separate bill, is considering doubling the Passenger Facility Charge commercial flyers pay in order to cover the cost of airport improvements: Shouldn’t we be taxing wealthy travelers more, not less?

“Private jets account for 15 percent of the air traffic control usage but contribute only 1.55 percent towards the costs,” write Collins and Hoxie.

The tax exception for private jet management companies is just one item in a long list of grievances critics have with the Trump tax bill, which offers extreme tax relief to the wealthy at the expense of middle- and low-income households. It also contains provisions that have little to nothing to do with taxes but could transform our way of life and our environment, such as allowing churches to engage in political activism and opening the Arctic National Wildlife Refuge in Alaska up for oil drilling. Senator Bernie Sanders and others have organized a “People’s Filibuster” to block a Friday vote on the tax cuts. They’re asking the public to “melt the phone lines” of GOP Senators backing the legislation.