Contemporary political theorist Chantal Mouffe argues that all art is inherently political in that all aesthetic forms can be politicized and all political forms can, in turn, be aestheticized. In looking through this lens, art has the potential to intervene in our social and political realities, disturbing and transgressing established hierarchies of power that govern our daily lives.

Art can be a force for change, presenting activist visions of the underrepresented — minority voices expressing a discourse of liberation and equality. Through a critical consideration of today’s injustices or utopian imaginings for a better tomorrow, the artist and her product present this possibility.

At the Whitney Museum of American Art, the ongoing exhibition, “An Incomplete History of Protest: Selections from the Whitney’s Collection, 1940-2017” seeks to call up historical flashpoints when art was used as a strategic tool to transform public consciousness and intervene in the sphere of politics, affecting culture both at the center and periphery of the nation. Broken up into what the curators have referred to as “historical case studies,” the art and agitprop of the Beat Generation, the Vietnam-War Era, Black Power and civil rights movements, second- and third-wave feminism, AIDS awareness and the gay liberation movement are organized into various sections of a sprawling exhibit that takes up the entire sixth floor of the museum.

In their literature, the curators admit the impossibility of giving a complete history of protest, since this history is ongoing and is being written and expanded as the exhibition hangs.

The aesthetic acts of intervention highlighted at the Whitney range from the subtle to the overt. Much of the time it is the simple act of making visible the largely invisible periphery of social experience that makes the art object and its creation political. On display, Larry Fink’s poignant photographic documentation of the emergent Beatnik counter-culture of the 1950’s showcases their embodied opposition to the repressive homogeneity of post-war consumer culture. Likewise, AA Bronson’s monumental photographic print of his creative partner Felix Partz just hours after his tragic death from the AIDS virus, reveals the devastating consequences of the public health crisis — the reality of which was suppressed by the federal government for years.

Many works in the exhibition function as poignant records of artistic activism targeting the Whitney for its once largely white-male-artist base.

At the center of the exhibit is a display entitled “Stop the War,” which consists of selected pieces from the Daniel Wolf Collection of Protest Posters; a recent acquisition that forms a kind of grassroots nucleus to the proposed history of protest on display. Ranging from sophisticated combinations of image and text to simple graphic symbols and statements — one poster is simply a Black Power solidarity fist while another consists of the word “RESIST” scrawled across a brick wall — the collection conveys the politically charged atmosphere of the 1960s, when the war in Vietnam was raging and there was serious talk of revolution among the youth in the streets.

A strong effort is made throughout the exhibition to invoke our nation’s long tradition of political protest and agitation. At points the flurry of cultural production organized under various subheadings can be overwhelming. The works range in medium from large installation pieces to small, 8 by 10 inch framed protest posters. Questions of representation and civil-rights progress are extensively broached. There is a twin focus on anti-war movements and those concerned with identity politics. Conspicuously missing in this exhibition: works addressing class and the ways it intersects with race and gender, as well as the rich history of intersections between American art and the labor movement. 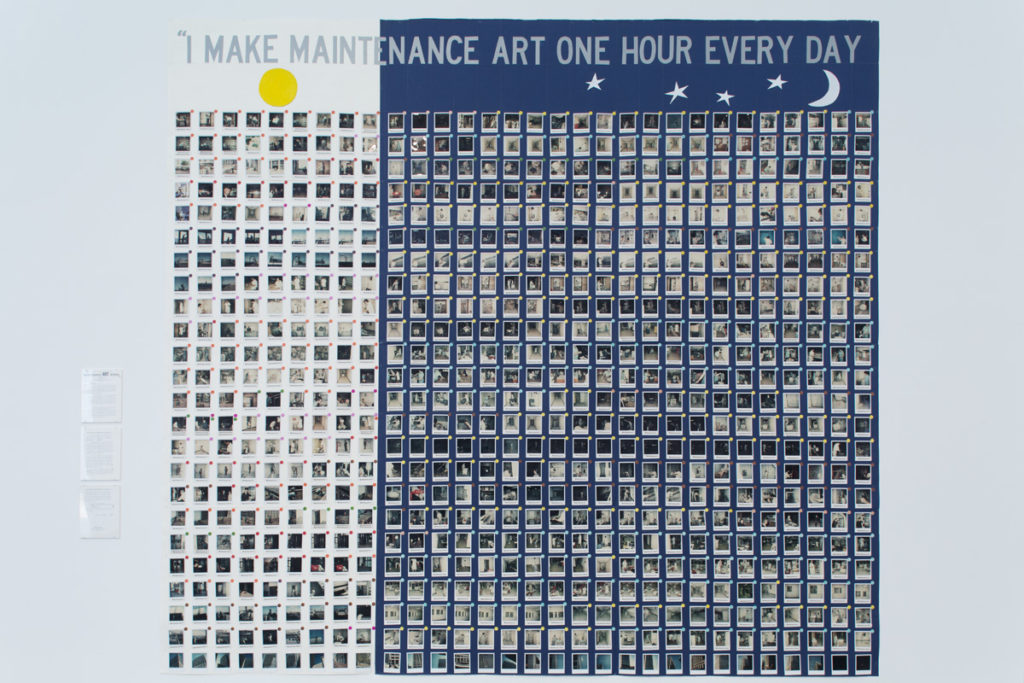 One notable exception, however, is Mierle Laderman Ukeles’s large scale I Make Maintenance Art One Hour Every Day (1976). Within the “No Idle Gesture” section, which focuses on second and third wave feminism, it stands out as an amazing hybrid work of performance and photographic installation. The piece documents the actions of three hundred maintenance workers as they attend to their daily duties over the course of five weeks, both day and night shifts. Assembled together, the 720-collaged dye diffusion transfer prints create a stunning rhythmic procession of the normally unseen and un-thanked labor of the maintenance worker. Ukeles simultaneously highlights the tension of labor’s power hierarchy, choosing to focus on the ‘unheroic’(feminized) work of maintenance over ‘heroic’(masculinized) production, construction or demolition. In her 1969 manifesto, Ukeles teases out the gender dynamics that also mark this hierarchy.

“No Idle Gesture” also features a robust collection of Guerrilla Girls protest posters, which influenced debates over sexism in the art world during the 1980s and 1990s. These are poised between two video performance pieces by Martha Rosler and Suzanne Lacy. Rosler’s iconic Semiotics of the Kitchen (1975) and Lacy’s Learn Where the Meat Comes From (1976) remain powerful performative demonstrations of feminist agency in the face of the gender biases that pervade the very language we speak, the objects we possess and the spaces we inhabit. 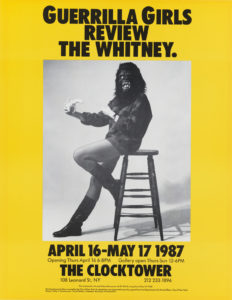 Other notable sections of the exhibit include “The Usable Past” and “Abuse of Power,” where social criticism is driven home by the appeal of a masterful aesthetic presentation. Carl Pope’s Some of the Greatest Hits of the New York City Police Department: A Celebration of Meritorious Achievement in the Community (1994) absolutely dominates the “Abuse of Power” gallery with its sweeping arrangement of gleaming, multicolored trophies and plaques. With sardonic wit, Pope draws a critical eye to the persistent violence perpetrated by trigger-happy police officers serving black and brown communities in the name of “law and order.” Naming the officers and memorializing the victims of their gun-fire, these trophies and plaques represent a dark gesture of commemoration and agitation.

Throughout the exhibition’s eight sections, the Whitney and its curatorial staff engage in an exercise of self-reflective, institutional storytelling. Emerging from the various galleries is an underlying narrative about the Whitney’s gradual inclusion of a more diverse and dynamic set of artists and artworks into its collection. Many works in the exhibition function as poignant records of artistic activism targeting the Whitney for its once largely white-male-artist base. Faith Ringgold’s Hate is a Sin Flag (2007), is a mixed media work on paper that tells the story of how Ringgold was called the n-word while protesting discrimination against black artists outside the Whitney in 1968. “I was passing out flyers about the Whitney’s discrimination against Black artists when a white man told his daughter: ‘Don’t go near that NIGGER,’” writes Ringgold. One of the Gorilla Girls most humorous posters on display, The Gorilla Girls Review the Whitney (1987), is a direct jab at the Whitney’s continued underrepresentation of women artists throughout the 1980s. 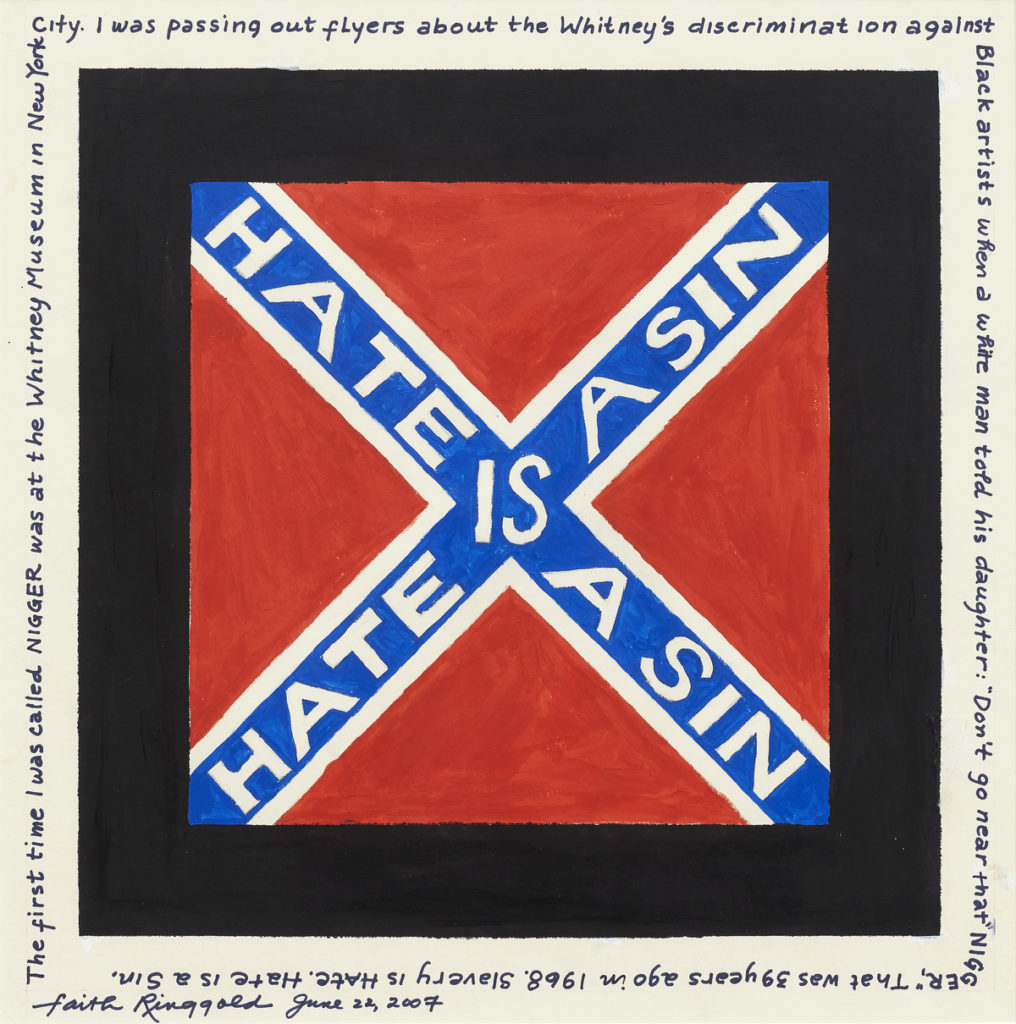 The last section in the exhibition, “The Usable Past,” functions as a kind of proof of the Whitney’s progress towards inclusion. Including female artists from minoritized working class, black and indigenous communities such as Ja’Tovia Gary, Jaune Quick-to-See Smith and Julie Mehretu, the section demonstrates the power and necessity of diversity in the arts. It highlights the plethora of positions from which to critique, challenge and intervene in our collective social and political realities at a time when white-male privilege is reasserting itself in the halls of power and voices of opposition rage in the streets.