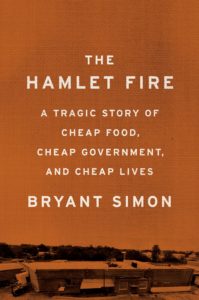 In 1991, a fire at a chicken-processing factory in Hamlet, North Carolina killed 25 workers. While briefly a national-news story, it soon disappeared from the collective consciousness. Now, over 25 years later, Temple University historian Bryant Simon has written a book, The Hamlet Fire: A Tragic Story of Cheap Food, Cheap Government, and Cheap Lives, that uses the story of the fire to illuminate the human (and animal) costs of the direction American society has taken since the 1970. It is a magisterial work that lives up to the challenge.

The book begins with a harrowing account of the fire itself. According to Simon, many people in Hamlet lay the blame for the tragedy on owner Emmett Roe and his son Brad, who relocated from Pennsylvania when they purchased the Imperial Food Products factory. Although the Roes do not come off well, the book is basically a refutation of the idea that blame can be neatly placed on a couple of venal individuals.

Simon’s narrative is organized around the contrast between two phases of capitalism, which he summarizes with two words — “more” and “cheap.” (More academically minded readers would use “Fordism” and “neoliberalism.”) During the phase of “more,” beginning with the New Deal of the 1930s, the government worked to insure demand for goods by taking measures to keep employment high and creating a social safety net. Consequently, wages tended to rise.

In the era of “cheap,” beginning roughly in the 1970s, government took measures to ensure that businesses could produce goods as cheaply as possible. The resultant drop in wages was somewhat offset by the resultant cheap prices of goods. Simon’s history offers a multisided, close look at the consequences of the “cheap” regime in a particular time and place.

Simon paints a golden age in Hamlet’s history in the time of more. The small town, near the South Carolina border about halfway between Charlotte and Fayetteville, was a key transportation hub for railroads and had thousands of union jobs servicing trains, mostly held by white men. As a result, many working people were able to enjoy something like a middle-class lifestyle. Women largely worked in their homes raising kids. That golden age was more dross for African Americans, who were mostly excluded from this prosperity, although there were some railroad workers and a small middle class of professionals. That unions were for a time powerful in this North Carolina town is one of a number of revelations that unsettles familiar cliches about the South.

The good times didn’t last forever, as the railroads were superseded by highways. The number of good jobs shrunk, never to return. Instead, Hamlet became one of countless places competing to attract any sort of workplace, a rural ghetto where the barriers to escape to a more prosperous future were steep. It managed to get the Roes, who in the 1980s were looking to move their chicken factory away from the more unionized and regulated environment of Pennsylvania.

North Carolina aggressively marketed itself as a place welcome to such businesses. Its union density and average wage were the lowest in the country. In fact, it became the most industrialized state in the nation on a per capita basis in this way. Ironically, the increased participation of women and African Americans in the paid labor force, an accomplishment of progressive social movements, helped make labor even cheaper.

USDA inspectors showed little interest in the safety of workers.

Although Roe had practiced some forms of paternal management and civic engagement in Pennsylvania, he never bothered to do so in Hamlet. In fact, he never even put up a sign on the factory advertising what was being produced inside. He didn’t bother applying for the required permits to remake the factory, nor did he follow all the procedures required regarding the considerable amount of water needed to operate the chicken factory. Roe did not bother to register his business in North Carolina, which might have led to someone noticing his poor safety record in Pennsylvania. None of this seemed to matter much to authorities at the time.

The U.S. Department of Agriculture frequently inspected the Hamlet factory, but strictly for food safety. It showed little interest in the blatant endangerment of workers — loose wires and such — so long as it did not affect the food. Roe received help from local employment agencies in finding single women with children as workers. They were the workers most likely to fear losing their jobs, and thus the least likely to complain.

The chicken produced was also part of the system of cheap. Industrially produced and processed chicken, turned into nuggets and tenders, emerged as the cheapest way to turn grain into protein. It was easy to prepare and consume, crucial for people who no longer had the time to prepare more elaborate meals for their families. Loaded with fillers and encased in fat, sugar and salt, these chicken products helped contribute to obesity in many with few dietary options. This made it possible to portray them as moral failures. Simon writes graphically about the consequences of the drive to cheapen the product both for chickens and the farmers who grew them.

Squeezing out every last cent for profit also put intensifying pressure on the Roes. An expansion plan failed, leading to a mountain of debt, which resulted in renewed pressure on the workers inside the Hamlet factory in the months before the fire.

The federal Occupational Safety and Health Administration (OSHA) failed to protect the workers. Simon documents the way the law that created OSHA was flawed from the start. It gave states discretion about how they enforced it, so states like North Carolina watered it down. Nothing resembling the regime of surprise inspections needed to keep factory owners honest emerged.

In the wake of the fire, numerous lawsuits were filed, some of which resulted in some money being directed toward survivors. But it was not more than a drop in the bucket compared to what was actually needed to heal the trauma. Simon compares the aftermath of the Hamlet fire to the Triangle Shirtwaist fire of 100 years ago. (At both Hamlet and Triangle, many workers were trapped because the owners had locked exits from the outside to prevent theft.) Hamlet drew national media attention and resulted in some beefing up of OSHA in North Carolina, but it was nothing like the workplace-safety and pro-union efforts catalyzed by Triangle, which bore fruit in the New Deal.

This is a great book. Even six years after Occupy, the horrors of working-class life illuminated here remain largely hidden. But since The Hamlet Fire’s publication in September, it has received only limited attention. One can only hope that professors of sociology and related areas discover it, since it conveys many of the concepts they grapple with in vivid, jargon-free prose. It is a book all Americans should be studying and learning from, as we continue to live in the world of cheap food, cheap government and cheap lives.