The Indypendent
Menu
A Free Paper for Free People
LOVE IN ARABIC: Rockers Habibi never fail to disappoint. Catch them at Baby’s All Right on Nov. 29. Credit: Sam/Flickr.

SUN NOV 19
12PM–6PM • $2 suggested donation
LIT: ZINE LAUNCH
Got a Girl Crush — a blog and annual print magazine about women, by women, for everyone — is teaming up with Brooklyn’s New Women Space to feature an emerging line-up of female, fem-identifying, non-binary, transgender and gender non-conforming printmakers and their zines.
New Women Space
188 Woodpoint Rd., Bklyn

WED NOV 22
6:45PM–8:15PM • $12
SCREENING: David Lynch: The Art Life
The Art Life examines Lynch’s art, music and early films, shining a light into the dark corners of his unique world and giving audiences a better understanding of the man and the artist. Viewers are given a private view from Lynch’s compound and painting studio in the hills high above Hollywood, as Lynch retells personal stories from his past that unfold like scenes from his films.
Videology Bar & Cinema
308 Bedford Ave., Bklyn

SUN NOV 26–SUN DEC 17
2:30PM • $15
PERFORMANCE: Reverend Billy & the Stop Shopping Choir
Feeling worn down by Year One of the orange-haired nightmare? Reverend Billy and the Church of Stop Shopping Choir will be preaching and singing and raising a righteous ruckus for four straight Sundays. It’s the perfect tonic for the weary activist soul.
Joe’s Pub
425 Lafayette St.

WED NOV 29
8PM • $10–$12, 21+
MUSIC: Habibi
Drawing comparisons to iconic figures from the Smashing Pumpkins to the Supremes, Habibi have proven capable of crafting music that is both uniquely their own yet able to traverse borders in its overarching appeal.
Baby’s All Right
146 Broadway, Bklyn

THU NOV 30
6:30PM–8:30PM • $15
ART: Love It or Hate It: Public Art and Controversy
Join leading scholars and artists, including painter and sculptor Audrey Flack, for an examination of how art in public spaces can serve as a flashpoint for larger social debates. This talk is part of the ongoing exhibit, “Art in the Open: Fifty Years of Public Art in New York City.” Tickets available at mcny.org.
Museum of the City of New York
1220 Fifth Ave.

THU NOV 30
6:30PM–8PM • FREE
TALK: We Own It: Worker Cooperative Stories and Trends in the Field
This English/Spanish presentation from the Democracy at Work Institute and U.S. Federation of Worker Cooperatives will outline how worker cooperatives increase stability and economic security for marginalized communities and highlight current efforts to build coop power and influence policy. Dinner provided.
The Brooklyn Commons
388 Atlantic Ave.

FRI DEC 1
9PM–12AM • $25, 21+
PARTY: Art After Dark
Join the Guggenheim Museum for an after-hours evening featuring a DJ performance by SHYBOI (KUNQ/Discwoman) and a private viewing of current exhibitions, including “Art and China after 1989: Theater of the World” and “Josef Albers in Mexico.” Cash bar serves wine and beer. Guests will be asked for a photo ID. Tickets available at ny.guggenheim.org. No tickets sold at the door.
Solomon R. Guggenheim Museum
1071 5th Ave. 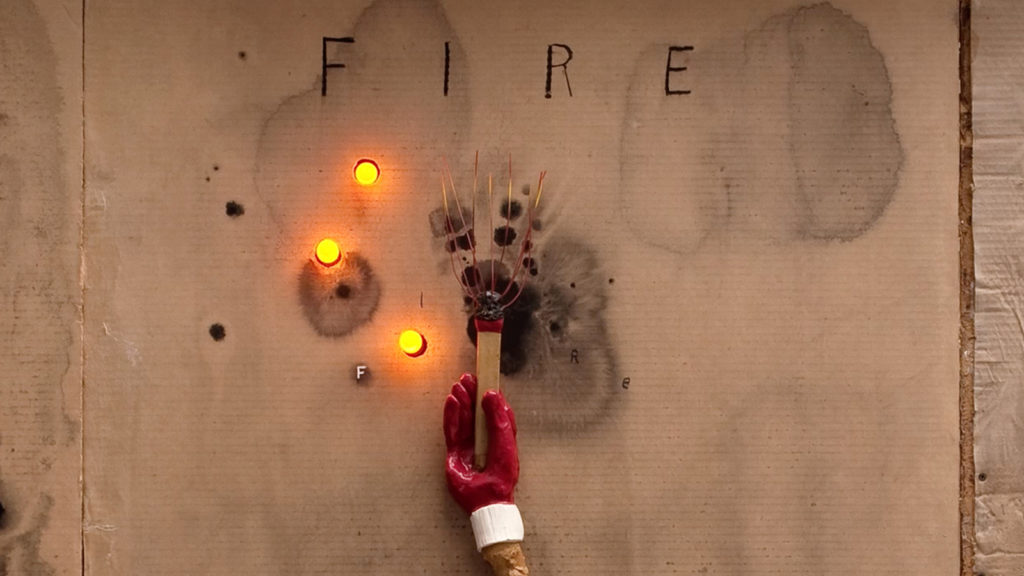 RENAISSANCE MAN: The Art Life, showing at Videology on Nov. 22, takes you inside David Lynch’s Hollywood home and showcases artworks like this one to give viewers a glimpse of the man behind iconic films like Blue Velvet and Mulholland Drive.

SUN DEC 3
4PM–5PM • FREE
PERFORMANCE: Flamenco in the Boros
Flamenco Vivo Carlota Santana kicks off its annual Flamenco in the Boros tour. Through music, carols and dance, Navidad Flamenca highlights the rich holiday customs of the Spanish-speaking world from Argentina and Mexico to Colombia, Cuba and Puerto Rico and reflects the influences of Spanish culture throughout the Americas.
Bronx Music Heritage Center
1303 Louis Nine Blvd., Bronx

SUN DEC 3
7:30PM • $8
THEATER: Letters in the Dirt
An immersive, participatory journey through the memories of the late Aiyana Jones, shot and killed in 2010 by an officer during a botched police raid in Detroit on the wrong home. The piece strives to honor her, combining ritual, games, poetry, music and group collaboration to explore all the ways black folks create beginnings.
603 Bushwick Ave., Bklyn

THU DEC 7
6PM–9PM • FREE
MUSIC: Patrick Brennan’s Transparency Kestra
Composer and saxophonist Patrick Brennan has pursued a contrarian and independent musical path for over three decades in search of those yet unheard somethings just around the corner. Transparency Kestra is a rotating community of musicians, a polyrhythmic drum ensemble and an engine of multidirectional musical exploration.
El Taller Latino Americano
215 E 99th St.

FRI DEC 8
7PM–9PM • FREE
BOOK LAUNCH: Playing with Dynamite
Sharon Harrigan’s father was larger than life, a brilliant, but troubled man who blew off his hand with dynamite before she was born and died in a mysterious accident when she was seven. Harrigan’s new memoir is about a daughter who goes looking for her father but finds her mother instead. It’s about the slipperiness of memory, the necessity of grief and what it means to go home again.
Bluestockings
172 Allen St., Bklyn

SUN DEC 10
2PM–4PM • Sliding scale, $6–$15
WORKSHOP: Counter-cartographies of the Global Supply Chain
Is there ethical consumption under capitalism? This workshop from the Marxist Education Project will trace the passage of everyday commodities from their point of production to your doorstep and examine the infrastructure and ‘externalized costs’ —human, economic, social and environmental — of the international flow of things.
New Perspectives Theatre Company
458 W. 37th St.

WED DEC 13
6:30PM–8PM • FREE
PHOTOGRAPHY: Picturing Place: The Anthropology of Race, Class, and Community
Photographers Brenda Ann Kenneally and Danna Singer portray the realities of intergenerational poverty and a complicated tangle of signification, race and class in the communities in which they were raised. Kenneally and Singer will appear in conversation with anthropologist John Hartigan Jr to discuss what it means to portray, embed in and study one’s own community. Register in advance at acmeticketing.com.
International Center for Photography Museum (Downtown)
250 Bowery

This is reader supported news. Make a donation.